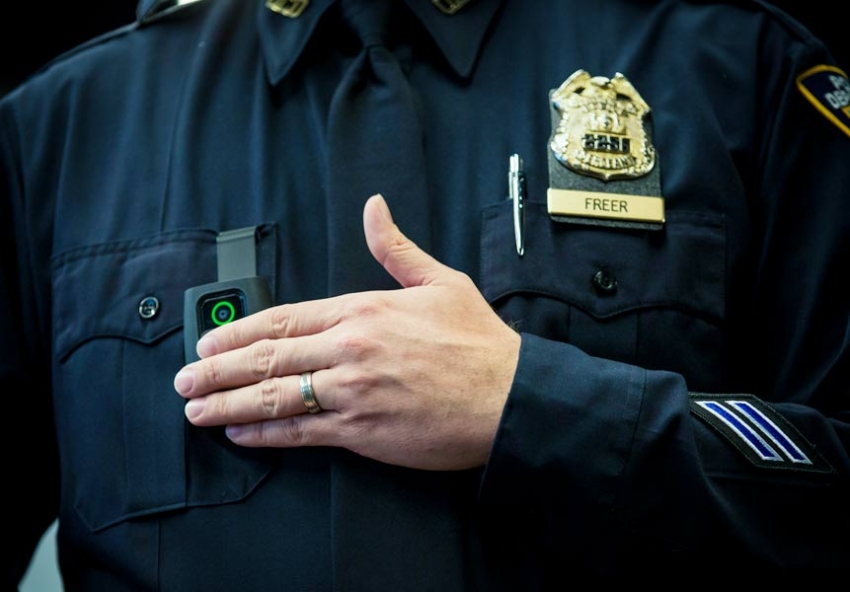 NYPD Sergeant Joseph Freer demonstrates how to use and operate a body camera on Dec. 3, 2014, in New York City. (Andrew Burton / Getty Images)

People watching the same video can still come to very different conclusions about what happened, just as eyewitnesses see different things in real time. The truth is completely conditioned by your social location and by whether or not you’re likely to believe the police.

In response to the national uproar over the killings of unarmed African Americans by police, policymakers across the country have proposed putting body cameras on officers. According to Time magazine, over a quarter of the country’s police departments are already testing or actively using cameras, including the NYPD and the LAPD. The Obama administration has called for federal funding to support the deployment of as many as 50,000 devices to state and local law enforcement agencies. The administration’s reasoning captures the perspective of most camera supporters: Recording police will help “sustain trust” between law enforcement agencies and the communities they interact with. Reformers have suggested that video could have gone a long way towards resolving the ambiguities of the Michael Brown case—where eyewitnesses gave conflicting stories.

But the death of Eric Garner in a confrontation with police that was recorded by a bystander has raised questions about the efficacy of video. The act of recording failed to dissuade officers from using the aggressive restraints that killed Garner, and the recording itself failed to produce a grand jury indictment. To skeptics, this suggests that cameras will do little to increase police accountability. Civil liberties advocates, for their part, are worried that police body cameras will become a tool of surveillance of the population, especially in the absence of guidelines governing the use of the recordings.

To discuss the issue, In These Times convened a panel of three: Mariame Kaba, a member of the Chicago antipolice violence organization We Charge Genocide; David Fleck, a vice president at Vidcie, a major manufacturer of police body cameras; and Connor Boyack, founder and president of Utah’s Libertas Institute, a libertarian think tank.

What does the existence of video of Eric Garner’s arrest tell us about the efficacy of cameras?

Connor: For too long, juries and judges have had to rely on “he said, she said.” Witnesses can be compromised, and law enforcement officers are, of course, deferential to the system that employs them. We are cautiously encouraged by the proliferation of body cameras because of the ability to preserve a recording of events as they transpire. Now, that doesn’t mean they’re perfect, nor that systemic changes aren’t needed. But, even if we believe that the system failed in the Garner case, the video has fostered a public discussion that otherwise would not be happening.

David: Given the [Garner] video, it was really hard to dispute what was going on, regardless of the judicial system’s final outcome. I think that having a video recording of any police activity is going to be the norm in the future, simply because it has such a powerful impact on how we understand what really happened.

Mariame: This notion that there is a single truth that comes out of a video is interesting to me. People watching the same video can still come to very different conclusions about what happened, just as eyewitnesses see different things in real time. The truth is completely conditioned by your social location and by whether or not you’re likely to believe the police. Some people have friendly relations with the police. But others don’t. And that affects what they see happening in videos. We’ve seen this borne out by recent grand jury deliberations.

Does it matter whether video is shot by the police or by bystanders?

Mariame: At We Charge Genocide—which centers on the voices of young people of color, who are disproportionally targeted by the Chicago Police Department—we are promoters of cop watching. We think it’s fundamental that civilians be the ones holding the cameras. Because, frankly, most of us in targeted communities don’t trust the police. We believe that when police control cameras, the cameras are at the service of police violence and oppression of targeted groups within our society. We don’t trust that they’re not going to turn off those cameras. We don’t trust that they won’t doctor video. We wonder why police in some jurisdictions are so happy to have them, if cameras are supposed to keep them honest.

David: Both can provide significant information. In the case of Eric Garner, a citizen having a camera allowed people to come to their own conclusions as to what the real situation was. But police body cameras are also important because the opportunity to capture video has to occur at the point that the incident has started, not at some point thereafter when a general citizen happens by and starts to record. They may be missing some very important minutes of footage.

An experiment by the Rialto, California, police department speaks to both sides of this coin. A 2012 study by Cambridge and Hebrew University researchers found that in the first year that Rialto police wore body cameras, complaints against officers fell by 88 percent and the use of force dropped 60 percent. But on the other hand, the New York Times describes a Rialto police officer confronting a civilian and saying, “You’re being videotaped.” That struck me as an indication of how body cameras in the hands of police could actually intimidate a lot of communities that already have reason not to trust the police. How should that be addressed?

Connor: Many police officers want body cameras, because they recognize that recordings will resolve false citizen complaints against them. Here’s the concern that people need to have: New technology without guidelines and enforcement is highly problematic because of the potential for abuse. In Utah, where our organization operates, we sent open records requests to every law enforcement agency we could identify that owned and operated body cameras. They did not have many guidelines. By and large, they simply said, “Hey, don’t record your fellow officers and make sure to upload the video at the end of your shift.”

David: Whenever new technology is introduced, there are going to be factions that are concerned or skeptical. We have to go through a learning process of understanding the right ways of using it. Whatever we are doing with body cams today will be different at the end of this year as technology improves, policies become more clear, laws change and we see more benefits. Situations like the Eric Garner case, where video clearly showed what was actually going on, ultimately help the citizenry understand the benefits of giving up some privacy while gaining significant amounts of information to help decipher facts.

Mariame: We’re coming at this from different ideological perspectives and different conceptions of what police do and don’t do, which come from our different lived experiences. We at We Charge Genocide think that policing is inherently racist and has been from its inception. It has been violent from its inception. So that’s part of the problem: Current conversations about body cameras support the narrative that police only need to be reformed and everything will be fine. I’m all for laws and rules. But we already have laws, we already have policies, and the police aren’t held to them. They act with impunity and are let off the hook. It’s almost impossible to indict police officers. So the question becomes: Is our system truly rotten to the core and in need of a shift? Or can we simply put in some harm reduction tools like body cameras and be okay?

Connor, you’re in Utah, where it was reported by the Salt Lake Tribune late last year that the second leading category of homicide in the state is killing by police, and that police have killed more people than gang members or drug dealers have. Does that suggest that there are more fundamental reforms we could be talking about, as Mariame argues?

Connor: To understand policing, we need common reference points that are not disputable. Video provides that. Yes, we bring our prejudices to video, but it is far better than unsubstantiated claims. Body cameras are not the be-all, endall solution, but they are a net positive, provided guidelines are in place and provided the public can access the video.

Mariame: From our perspective, cameras do not reduce harm enough to warrant the investment. Money allocated for any new technologies only inflates already huge police budgets. Last year, 39 percent of the operating budget of the city of Chicago was allocated to the CPD, while the city is cutting other kinds of services—schools, mental health clinics—that would probably lead to less need for policing or no police at all. We should be focusing on 20 other things that will better get to the root cause of oppressive and violent policing in our communities.