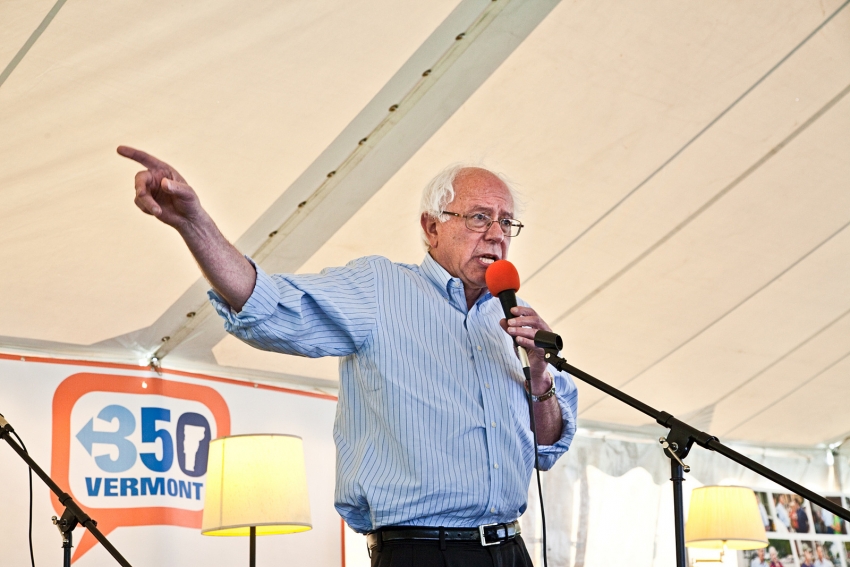 If Bernie Sanders Runs For President, It Won’t Be as an Independent: “I will not be a spoiler”

The Vermont independent also pledged to push for a law change that would allow supervisors to start making overtime.

Sanders said he would take a different approach to the Democratic Party’s strategy of trying to beat Republicans in the big money game. Rather than view grassroots activism as a way to get elected, Sanders wants to make it the norm in progressive politics.

Over 3,000 activists and donors joined a Democracy for America (DFA) conference call with Senator Bernie Sanders (I-Vermont) on Wednesday night to discuss how Democrats can move forward their agenda after losing control of the Senate. Amid the uncertainty of a Republican majority in Congress and a President itching for bipartisan compromise, DFA members sought to alleviate one nagging question: Who will be the progressive standard bearer in 2016?

Naturally, “Will you run for president in 2016?” was the first question DFA Executive Director Charles Chamberlain asked Sanders. Though not definitive, his answer was enough to leave these activists hopeful.

“I am giving very serious consideration to it, but before you make a decision of that magnitude, … you have to make sure that you can do it well,” Sanders said. “So what we are doing is reaching out to folks all over this country trying to determine whether or not we can put the grassroots organization together that we need.”

Sanders knows he will have to rely on grassroots mobilization to have a fighting chance at being elected, because his campaign will take on every monied interest. “If I run, we’ll be taking on the billionaire class,” he said. “That’s Wall Street, the drug companies, the military industrial complex.”

To the dismay some idealists, Sanders rejected the idea of running for president as an independent. “No matter what I do, I will not be a spoiler,” Sanders said. “I will not play that role in helping to elect some right-wing Republican as President of the United States.”

Chamberlain responded by reminding Sanders that DFA already has some of the grassroots Sanders needs. “I think that you can count on a lot of DFA members to be right there behind you backing you up if you decide to run,” Chamberlain said. “I hope that you do.”

Until now, progressive groups like DFA have placed their 2016 hopes in Massachusetts’s Elizabeth Warren, who has flatly denied having any presidential ambitions. She has a few months to change her mind before she has to start raising money to remain a serious contender, but, unless she or Sanders runs, progressive populists are not likely to have a candidate to rally around. It’s hard to see DFA and MoveOn.org activists turning out for outgoing Maryland Gov. Martin O’Malley or former Senator Jim Webb, who have both expressed interest in running.

The question now, is who will step forward as the alternative to the pragmatic Hillary Clinton, who has already started laying the groundwork for her 2016 campaign.

Sanders spent the remainder of the call establishing his progressive vision for the country, both wooing and being wooed by his audience in equal measure.

Sanders drew a sharp contrast between himself and Obama on the Trans-Pacific Partnership (TPP). Reiterating his opposition to all free trade deals, including NAFTA, CAFTA and permanent normal trade relations with China, which Sanders says has cost America 3 million jobs. He described TPP, a free trade deal that was negotiated largely in secret, “a losing proposition for American workers.”

Though TPP’s passage seems likely with Republicans in control of the Senate, Sanders expressed some optimism that an unlikely coalition between Democrats and Tea Party Republicans would be enough to kill the agreement. “We’re going to really need some coalition politics, bringing together some very, very strange bedfellows,” he said.

The most significant other measure he hopes to accomplish in the next year is extending Fair Labor Standards Act (FLSA) protections to “supervisory” workers. Under current law, workers in a supervisory role who make over $23,600 per year are not entitled to receive overtime pay. The President recently directed Labor Secretary Thomas Perez to study how to extend the FLSA to cover these workers via executive action as he similarly ordered for white collar workers last year.

“My guess is that within a couple of months, you will hear a changing in the Labor Standards Act that will enable a whole lot of folks to get time and a half who today do not,” Sanders said.

Throughout the call, Sanders appealed to the working-class voters who feel that the Democratic Party has left them behind: “There are millions of people out there who feel that Democrats have not been strong enough in standing up for the working class, the middle class of this country and taking on big money interests.”

Sanders said he would take a different approach to the Democratic Party’s strategy of trying to beat Republicans in the big money game. Rather than view grassroots activism as a way to get elected, Sanders wants to make it the norm in progressive politics.

“It is not only absolutely imperative that we mobilize huge numbers of people for an election, but that those people stay mobilized after the election,” Sanders said. “Because if there is a mistake that President Obama has made, I think he has not been strong in maintaining the ties with the grassroots that helped elect him president.”

As president, Sanders told New York that he would organize massive marches on Washington to demonstrate to members of Congress who really hold power in government: “[W]hen these congressmen come by the White House and they’re beholden to the Koch brothers, the super-PACs, or the oil companies, I will say, ‘Do what you want, but first do one thing for me: Look out the window.’ ”

Sanders plans to return to Iowa next month to hold a series of town hall meetings and deliver speeches for progressive groups.

Whether he decides to run or not, Sanders remains the foremost progressive champion of the power that individual citizens could have over government: “Sometimes people think, ‘Well I made a phone call, I signed a petition, it doesn’t really matter.’ Well guess what? It really does matter.”

Connor Jones is a freelance journalist in Washington, D.C. He can be reached at jonesconnord [at] gmail.com or at connor-jones.com. Follow him on Twitter @cwnnor.