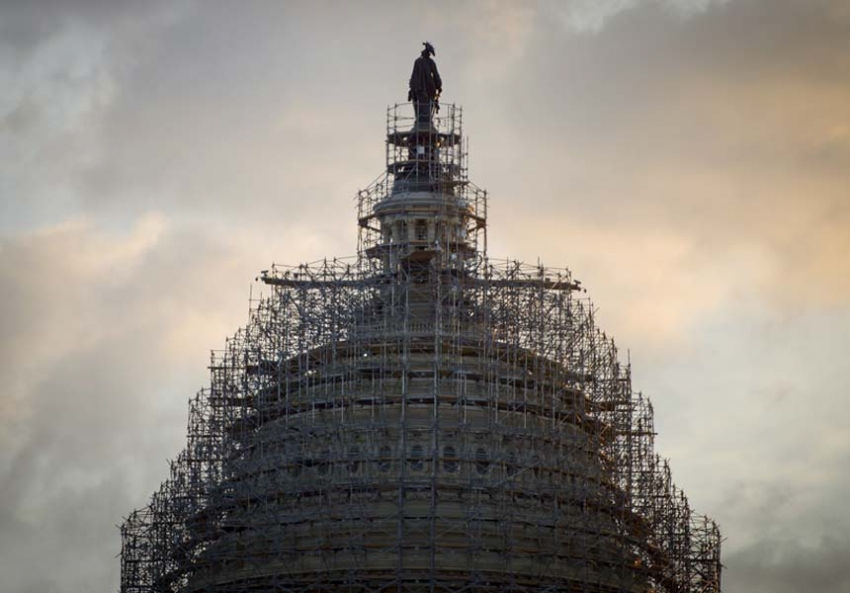 Things are looking hazardous both outside and inside the Capitol for progressives. (Brendan Smialowski / AFP / Getty Images)

The Upside of a Republican Congress

Progressives face a ‘tough slog,’ but so do Obama’s pro-corporate trade deals.

When it comes to the Trans-Pacific Partnership—NAFTA on steroids—and fast-track, progressive Democrats aren’t shy about taking on the administration.

Keeping things from getting worse: It’s a familiar, if modest, goal of left-leaning Democrats in Washington. Now it’s going to become even harder.

Republicans have their first Senate majority in nearly a decade and their largest House majority since 1946. Factor in a White House with an eye for bipartisan compromise, and the next two years could be downright hellish for progressives.

“We’re in defense mode,” says Conor Boylan, director of Progressive Democrats of America (PDA), which works to connect outside progressive groups with members of Congress. “That’s the sad reality.”

What’s more, the attacks may not be easy to anticipate.

In all likelihood, Republicans won’t be able to ram through the most extreme parts of their agenda—such as repealing the Affordable Care Act, curtailing abortion rights or passing a federal “right-to-work” law. Yet routine spending bills may provide cover for subtler methods of class warfare.

“Everyone knows there will be certain must-pass bills: things like appropriations, raising the debt limit, [avoiding] the [fiscal] cliff,” says Rep. Alan Grayson (D-Fla.), a member of the Congressional Progressive Caucus (CPC). “The president may feel that he has to live with corporate giveaways embedded in bills like that in order to keep the government and the country running. That would be a shame.”

The spending bill that passed in December 2014, for example, serves as an ominous portent. Though Democrats still controlled the Senate, President Barack Obama sided with Republicans over House Democrats and some Senate Democrats to pass the funding bill. The so-called cromnibus simultaneously repealed a key part of the 2010 Dodd-Frank financial reforms, loosened a once-sacrosanct ban on cutting pension benefits, and raised the cap on individual contributions to party committees from $259,200 to $1,555,200 per two-year election cycle.

“I’m more worried about bills like the ones we just saw,” says Grayson, as opposed to the more radical demands of Tea Partiers. “I don’t have a lot of confidence at this point that the Democrats in the Senate will hold together [and block them].”

When obstructionism pays off

Another flashpoint is trade.

This year, American negotiators are hammering out two massive trade agreements: the Trans-Atlantic Trade and Investment Partnership (TTIP) and the Trans-Pacific Partnership (TPP). TTIP looks east to link the United States with the European Union. The TPP, or “NAFTA on steroids” to its foes, covers 11 Pacific-coast countries, including Australia, Canada, Japan and Malaysia. Critics believe the deals will empower multi-national corporations, suppress workers’ wages and undermine labor and environmental regulations.

For either deal to stand a chance of passing in the form dictated by international trade negotiators and their corporate cheerleaders, Congress needs to grant the Obama administration what’s known as fast-track authority. Fast-track would restrict federal legislators to a simple up-or-down vote on whatever deal the negotiators agree upon.

Obama has already asked for that authority, and new Senate Majority Leader Mitch McConnell (R-Ky.) has pledged to win support for it in Congress. While most Republicans haven’t taken a public stance, most Democrats oppose the measure. Indeed, when it comes to the TPP and fast-track, progressive Democrats aren’t shy about taking on the administration.

It’s not as if the plight of the planet or the dangers of deregulation will suddenly sway the GOP. But Republicans do have to worry about the optics of enabling a president they love to hate.

“It remains to be seen if the Republican rank-and-file members of Congress, who are so busy attacking Obama as the power-grabbing unilateral imperial president, want to voluntarily delegate a huge swath of their constitutional authority,” says Lori Wallach, director of Public Citizen’s Global Trade Watch. Wallach says the change in Hill leadership may turn out to be a blessing in disguise. “If anything, it makes it less likely that trade authority will be granted,” she says.

That’s because a Democratic Senate majority may have been willing to pursue a scaled-back version of fast-track—one that would have given trade skeptics in their party some control over the deal—thereby passing the agreements.

Republican leaders aren’t likely to even consider compromises with trade skeptics, according to Wallach. Letting an unpredictable Congress tinker with such an important document would upset the GOP’s free-trade backers.

“Having a closed process that lets corporate interests effectively Trojan horse, via trade agreements, the kind of policies they can’t achieve in broad sunshine? That’s not something they’re going to be keen about giving up,” says Wallach.

So to avoid empowering Obama, the GOP may kill the agreements—for now.

Any hope for progress?

Notwithstanding the dreary outlook, progressives see a few ways of advancing their agenda.

“We really need to continue to work with the White House as we did in the last session to do things like executive orders,” says Pocan. “This is our opportunity to make sure that there’s a legacy for this White House that includes progressive policy.”

Pocan credits political pressure from the CPC with two such orders announced last year: granting federal contractors a minimum wage boost in February, and extending LGBT workplace discrimination protections to them in July. He says he hopes the administration will move ahead on similar worker-friendly measures, like mandating paid sick leave for federal contractors.

Grayson tells In These Times he’s on the lookout for those rare cases where progressive legislation can be framed in such a way to attract bipartisan support. He hopes, for instance, that Republicans will back his proposal to end the taxation of Social Security benefits.

And of course, members of Congress and outside progressive groups alike will continue pressing ahead with bills that are unlikely to pass, but sometimes manage to generate momentum in the long run.

Proposals for a financial transaction tax and Medicare-for-all, both of which are championed by National Nurses United, are sure to resurface. Most likely, so are the AFL-CIO-endorsed efforts to increase monthly Social Security benefits, despite the departures of some key Democratic senators. Last session, the progressive wish list also included a bill from Reps. Pocan and Jan Schakowsky (D-Ill.) that would ban fracking on public land—a demand that was loudly voiced by the group Food & Water Watch.

Few, though, have any rosy illusions.

“All in all, the next two years are going to be a tough slog,” says PDA’s Conor Boylan.