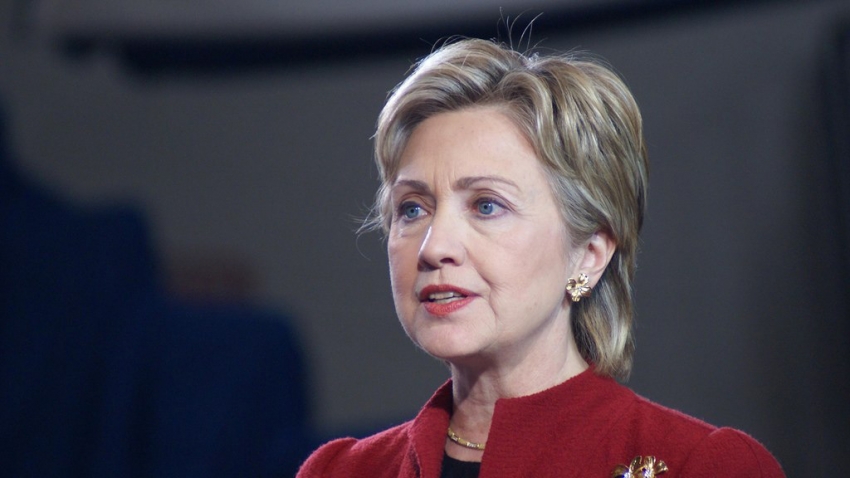 The gap between Hillary Clinton's politics and Elizabeth Warren's grows wider the farther back one looks in her track record. (Marc Nozell / Flickr / Creative Commons)

Clinton Isn’t Warren, No Matter What Her Allies Say

Despite recent claims by Hillary Clinton constituents that she aligns with Elizabeth Warren, a look at her track record proves otherwise.

If she does face Warren in 2016, Clinton’s record will likely once again be center stage, regardless of the recent contrition.

Hillary Clinton’s political allies want Democratic primary voters to believe that the former secretary of state is just like populist Massachusetts Sen. Elizabeth Warren, and they've been claiming that there are no differences between the two possible presidential contenders. There’s just one problem: That’s not true.

Clinton last week filled in for George W. Bush at an Ameriprise conference, continuing a speaking tour that is raking in big money from Wall Street. One of her aides later downplayed the idea that Clinton’s relationship with the financial sector could be a political liability for her, should she face Warren in the 2016 Democratic presidential primaries. The aide defiantly insisted that the two are exactly the same.

“Ask any so-called 'left' or 'liberal' critic of Hillary to name a single vote or position (on) which Elizabeth Warren and Hillary would disagree,” said the Clinton strategist to The Hill newspaper.

OK, fine. I’ll take the challenge—there are many differences between these two politicians.

For example, in her book, The Two Income Trap, Warren slammed Clinton for casting a Senate vote in 2001 for a bankruptcy bill that ultimately passed in 2005. That legislation makes it more difficult for credit card customers to renegotiate their debts, even as it allows the wealthy to protect their second homes and yachts from creditors. According to a 2009 study by the Federal Reserve Bank of New York, the bankruptcy bill’s provisions changing debt payback provisions played a central role in the foreclosure crisis, as the new law forced homeowners to pay off credit card debts before paying their mortgage.

“As first lady, Mrs. Clinton had been persuaded that the bill was bad for families, and she was willing to fight for her beliefs,” Warren wrote. “As New York’s newest senator, however, it seems that Hillary Clinton could not afford such a principled position. … The bill was essentially the same, but Hillary Rodham Clinton was not.”

Additionally, Warren has been a critic of so-called free trade deals, which create regulatory protections for patents and copyrights, but remove such protections for workers, consumers and the environment. Clinton, by contrast, was a key backer of NAFTA and voted for various free trade pacts during her Senate tenure.

Clinton was also a prominent supporter of the 1996 welfare reform legislation that made it more difficult for poor families to receive government benefits. With a new study from the Center on Budget and Policy Priorities showing that law coinciding with a rise in extreme childhood poverty, Clinton's position may open her up to criticism from Warren, who has positioned herself as a champion of the poor.

There is also Clinton’s vote for the Iraq War. During her 2012 Senate campaign, Warren was an outspoken critic of the war. As a senator, Warren is a co-sponsor of a new bill to repeal the original authorization for war in Iraq that Clinton supported.

Clinton, of course, has attempted to distance herself from her previous positions. In 2008, she said, “I should not have voted for that bankruptcy law.” That year, she also said she believes the NAFTA free trade model needs to be “adjusted.” And in her 2014 book, Hard Choices, Clinton says of her Iraq War vote: “I wasn’t alone in getting it wrong. But I still got it wrong. Plain and simple.”

The reversals certainly position Clinton closer to the base of the Democratic Party. But, as then-Sen. Barack Obama’s criticism of Clinton on these issues proved in 2008, her retrospective apologies and admissions do not necessarily wipe the record clean for Democratic voters, especially when she’s raking in hundreds of thousands of dollars from financial firms.

If she does face Warren in 2016, Clinton’s record will likely once again be center stage, regardless of the recent contrition.