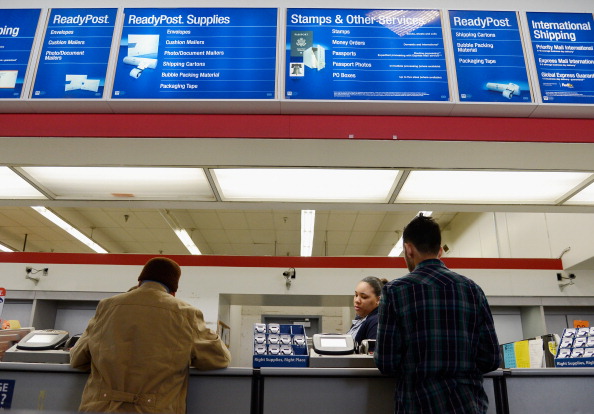 In one year, the underbanked and unbanked pay out more in financial service charges than the federal government spends on all domestic food aid.

American Postal Workers Union (APWU) president Mark Dimondstein has an offer that should be hard to refuse, especially for the 10 million American households, mostly low-income, that do not have a checking account or other basic banking services.

Through its network of 30,000 post offices and other outlets, the United States Postal Service (USPS) could readily and cheaply provide many banking services (just as it now provides money orders), no matter where you live or what you earn. This could save people without bank access from paying the exorbitant interest and fees at currency exchanges, payday lenders, rent-to-own dealers, pawn shops and other subprime financial institutions.

Postal workers would also win: Expanding postal services would create more jobs. Moreover, the additional revenue would strengthen USPS’s finances, bolstering the four major postal unions’ ongoing fight against management’s austerity measures. Although the postal service earned a surplus on operations in 2014, it ran a deficit overall because of perverse requirements Congress imposed in 2006 that retiree healthcare benefits for the next 75 years be fully pre-funded within a decade, a standard far more demanding than those required by any other retirement systems. Much more than the decline in first class mail, that manufactured budget crisis has fueled USPS management’s campaign of job cuts. The postal workforce dropped from about 700,000 in 2006 to less than 500,000 last year, and management hopes to reduce it by as many as 15,000 more this year. USPS management’s campaign of job cuts also involves service degradation, post office closings and privatization—such as delivering postal services at the office-supply store Staples, where jobs are low-wage and non-union. If postal unions can implement banking and roll back the retiree pre-pay requirement, they will return the postal service to solvency while expanding the public sector to address private market shortcomings.

When talks for a new APWU contract start in February, Dimondstein intends to make establishing postal banking a major demand, even though it falls outside the bread-and-butter issues unions typically bring up in bargaining. He plans to argue that creation of the bank would profoundly affect the mandatory bargaining issues of wages, hours and working conditions.

The negotiations come on the heels of a new campaign, launched this week by the postal unions—in partnership with community groups such as National People’s Action, Public Citizen, USAction and Interfaith Worker Justice—to mobilize the public in favor of a postal bank.

Twenty-eight percent of U.S. households either have no checking account or rely heavily on non-bank services such as currency exchanges. In many cases, poverty, high bank fees (especially for small-scale customers), credit problems and distrust keep people from opening bank accounts. But another major reason is lack of access.

United for a Fair Economy (UFE), a financial reform group and coalition member, reports that the number of federally insured financial institutions fell last year to the lowest level since 1934. This loss of banks is turning many distressed inner city and rural communities into “banking deserts” especially for people of color. The more than one quarter of Americans with little or no conventional banking services encompasses 53.6 percent of black households and 46.8 percent of Latino households, but only 19.5 percent of non-Latino white households.

These households are disproportionately poor; the average “underserved or unserved” household in 2012 made $25,500 a year. And, staggeringly, they paid an average of $2,412 for fees and interest to banking alternatives, according to a 2014 white paper prepared by the Postal Service’s Office of Inspector General in support of a postal banking service. That added up to $89 billion in price-gouging revenue for the subprime finance industry in just one year. (And that’s the conservative estimate; UFE calculated the average fees and interest at $3,029 per household in 2013, for a total of $103 billion.) In one year, the underbanked and unbanked pay out more in financial service charges than the federal government spends on all domestic food aid, including food stamps—much of it going to the same people who frequent payday lenders.

Subprime financial predation seriously destabilizes working-class families. People who filed for bankruptcy in 2012 fell short on their bills by an average of just $26 a month. Given that underserved households pay out about $46 a week to the rip-off bank alternatives, these high-priced debt service products may be a major factor driving many of the working poor into bankruptcy. Meanwhile, much of that predatory income ultimately finds its way into the coffers of Wall Street, the big banks and the super-rich who own and finance the alternative, high-cost operations.

Most poor people distrust both banks and the alternatives, such as pawn shops, but they do trust the post office, according to the UFE’s research. Also, unlike banks, post offices are in every neighborhood. Nearly 60 percent are in zip codes with one or no banks.

Postal banking has plenty of precedents. From 1911 to 1966, the United States Postal Savings System offered financially secure but low-interest savings accounts for small depositors. Many other countries, starting with Britain in 1861, have had postal banks, often quite large: Japan’s Post Bank was the world’s biggest savings bank in 2006.

A new postal banking system could be a fully public institution or an alliance with other parts of the banking system, such as community banks or credit unions. But in the end, “there’s this public option if [people] want to put their money where their mouth is,” says Dimondstein.

A postal bank is an example of the “Grand Alliance” between postal unions and the public that Dimondstein sees as essential for saving the postal service from dismantling. For this political strategy to succeed, the postal bank will have to provide its customers with a low-cost alternative to the predators, not just a means of making more money for the postal service.

The USPS should be able to dramatically reduce charges for services like check cashing, money transfer and bill paying, while still earning enough to make the postal service more financially sound. As the postal service already has a huge infrastructure and workforce, it would require relatively little start-up capital and could quickly operate on a very large scale, opening up potential efficiencies.

The coalition for a U.S. postal bank is part of a small but growing movement to democratize finance through institutions such as state banks. Postal banking has already won support from consumer financial protection advocate Sen. Elizabeth Warren (D.-Mass.). In July 2014, Rep. Cedric L. Richmond (D-La.) introduced a bill that would establish a postal bank, but it died in committee.

Because postal banking has existed previously in the U.S., the APWU believes that new legislation may not be necessary for USPS to offer expanded financial services. Instead, says Dimondstein, “We want the postmaster general and postal management to take this up. … Here’s a natural postal solution to their problems.”

But outgoing postmaster general Patrick Donahoe’s strategy has been the polar opposite. He explained in his farewell speech in early January that USPS management wants more flexibility to cut jobs, benefits, services and facilities, and to shift work into Staples stores. The new postmaster general, Megan J. Brennan, comes from his team; she served as chief of postal operations. But the combined pressure of union negotiations and public demand could inspire a new postmaster general to change course.

Dimondstein and the coalition believe the venerable post offices of America can play a new role in stopping the fleecing of a quarter of American families by piratical subprime financiers. And they believe that this old standby could demonstrate how government can fix a serious shortcoming of the private markets and avoid the resulting wreckage to many already hard-pressed American families. The opportunity for more democracy, equality and financial security, especially for the most vulnerable Americans, is huge. The cost of failure could be just as large.