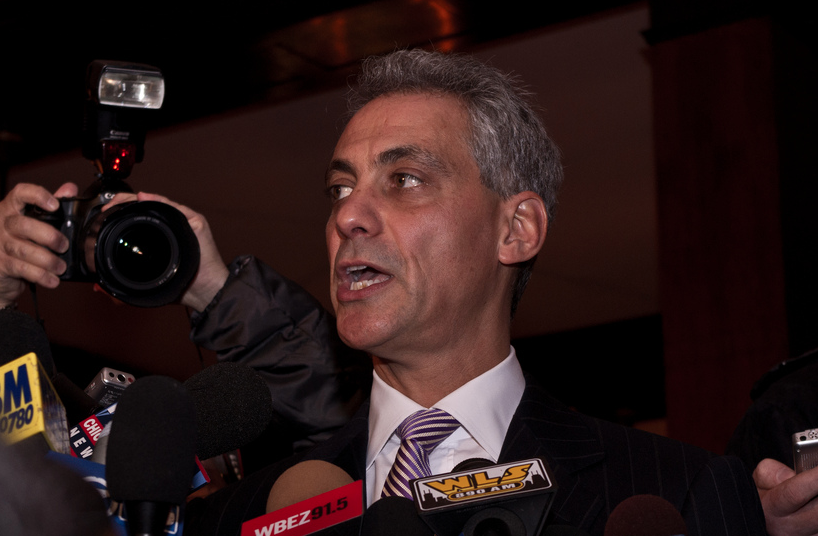 The Chicago mayor’s super PAC has spent large amounts of money to protect his allies on City Council—and take down those who oppose him.

It’s no secret that Rahm Emanuel has an unparalleled fundraising prowess and scores of wealthy friends to boot. The Chicago Tribune called him “the most potent political cash machine in Chicago history,” and he’s amassed nearly $30 million among the various bodies dedicated to supporting his mayoral run and its broader agenda.

Now that money is trickling down to some of Chicago’s most tightly contested aldermanic races through the efforts of Chicago Forward, a super PAC created by former Chicago Public Schools communication director Becky Carroll. Super PACs are allowed to take in unlimited donations, but can’t coordinate with or directly contribute to a candidate.

This round of aldermanic races, which culminate in Tuesday’s election, has seen a bevy of candidates that are particularly antagonistic to the status quo of Emanuel’s administration. Some of the key groups that the mayor has clashed with in the past four years as now running for aldermanic seats—teachers, environmentalists and community organizers.

Chicago Forward is pumping money into 17 of the 50 aldermanic races, according to the Chicago Sun-Times, with an eye to securing the seats of Emanuel’s stalwarts in the City Council, particularly in tight races—and, in a few cases, pushing the more troublesome progressive aldermen out of the picture.

Dick Simpson, a former alderman and now professor of political science at the University of Illinois at Chicago (UIC) tells In These Times that it’s “pretty clear” Chicago Forward is pumping money into races that worry the mayor’s office.

Chicago’s City Council isn’t know for its high level of dissension, even among members of the Progressive Caucus. A study of voting records released by UIC in December 2014 found that 38 of the 50 aldermen voted with Emanuel 90 percent or more of the time. For the Progressive Caucus, half voted with the mayor 75 percent of the time. With enemies like these, who needs friends?

One reason may be a number of controversial decisions that are yet to come, says Simpson. Chicago’s pension system is under-funded and the City Council may be asked to vote on a property tax hike to pay for it in the coming year or so.

“You want to ensure that the City Council doesn’t get a stronger progressive bloc and unite on key hard votes coming up like pensions,” he says.

In the questionnaires Chicago Forward sent to aldermen back in 2014, one of the six questions was whether candidates would support “tough but necessary steps, such as increases in property taxes or additional efficiencies throughout city government” to reduce deficits and preserve services, which likely implies pensions.

Here are some of the more interesting races that Emanuel has invested in that are worth watching on Tuesday.

The family politico vs. the public school teacher

In the 33rd ward, high school social studies teacher Tim Meegan is running against Deb Mell, who was appointed to the position by her father, a longtime stalwart of the Democratic machine, when he retired as alderman.  The campaign so far has been full of revelations of the tangled finances of machine politics—such as allegations that Mell was flouting campaign finance rules by working out of an office owned by her father, who heads up the 33rd Ward Democratic Organization.

Only days before the election, the story broke that opposition candidates in the 33rd Ward said they had received a phone call—with a voice sounding mysteriously like Mell’s sister Patti Blagojevich (wife of disgraced former Gov. Rod Blagojevich, who is now serving a prison sentence for corruption charges)—complaining about flyers made to look like parking tickets that neither of the campaigns had produced. Patti Blagojevich also called a neighbor with a Meegan sign in the front yard, personally urging the person to vote for Mell.

Mell has received more than $50,000 from Chicago Forward, making her one of the most strongly supported incumbents. Also running in the ward is Annisa Wanat, who has the backing of the Fraternal Order of Police, but Meegan is polling close enough to Mell that the race could result in a runoff.

Danny Solis has been alderman of the 25th ward for 19 years, following his work as executive director of the scandal-plagued community organization-turned-charter school operator United Neighborhood Organization. Solis, who votes 97 percent of the time with the mayor, narrowly won a run-off back in 2011 against a relatively unknown challenger.

Now he’s up against a handful of progressive challengers: Jorge Mújica, a longtime labor organizer and immigrant rights activist running as a socialist; Byron Sigcho, former vice president of the Hispanic Literary Council of Chicago and backed by the neighborhood group Pilsen Alliance; and Ed Hershey, a teacher supported by the Chicago Teachers Union.

Chicago Forward has inundated 25th Ward residents with mailers touting Solis’s support of, among other things, a minimum wage ordinance introduced by Rahm Emanuel in the final year of his term. The super PAC has spent more than $29,000 supporting Solis.

The biggest issue in the 10th ward, on the city’s far Southeast Side, is “petcoke,” also known as petroleum coke, a dusty byproduct of an oil refinery owned by the Koch brothers on Chicago’s Southeast side. Incumbent John Pope has come under fire for not dealing with the pollution quickly enough, though in the days before the election, KCBX Terminals announced it would cease storage of petcoke in the neighborhood.

He is considered a strong “rubber stamp” alderman for the mayor’s agenda in the City Council, voting with the mayor 100% of the time, and has received more than $56,000 from Chicago Forward. Running against him are Sue Sadlowski Garza, a teacher and the daughter of steelworker and labor leader Ed Sadlowski, and Olga Bautista, an activist against the petcoke plants running as an ecosocialist.

Also under target are members of the council’s Progressive Caucus. Alderman Scott Waguespack and Alderman John Arena, both of whom have voted and taken strong public stances against the mayor, have been the targets of political ads funded by Chicago Forward. Waguespack, in a deluge of mailers in his mostly Near North Side ward, was accused of voting against legislation that would have added $10 million in funding to fix potholes. Chicago Forward spent $6,770 on opposition funding against Waguespack.

In the case of Arena, ads have pegged him for changing his tune on tax hikes. Both aldermen have argued their votes were taken out of context. Chicago Forward has spent significantly more opposing Arena—a total of $19,550.

Meanwhile, both aldermen have signed on to a request to the Securities and Exchange Commission asking the agency to investigate whether Emanuel acted improperly by taking more than $200,000 from the executives of companies that manage Chicago’s pension money.

Along with the need for staunch allies in the city council, Dick Simpson sees another reason that Emanuel is adamant about removing any alderman that are openly hostile to his positions: his governing style.

“It’s pretty much my way or the highway with Rahm,” says Simpson. “Enemies are enemies, and you want to get rid of them.”