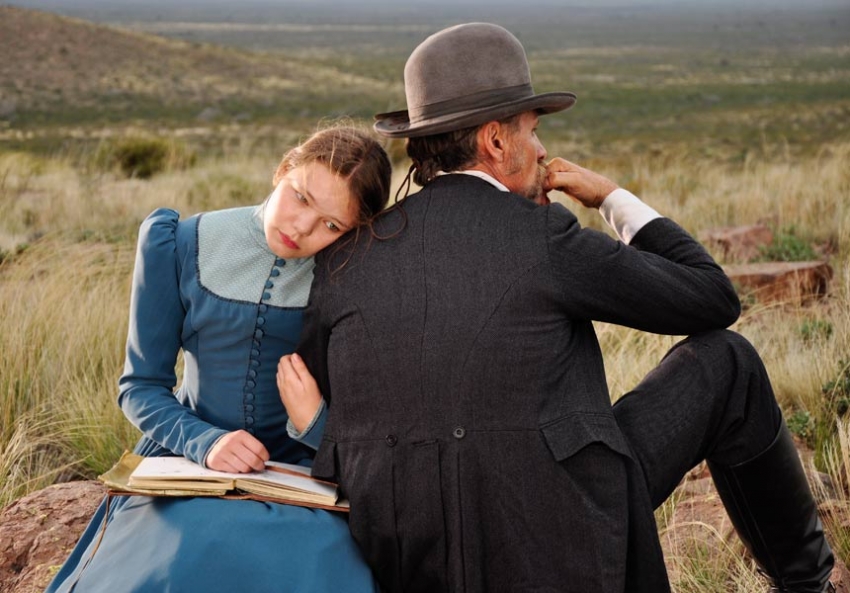 Jauja follows a Danish father and daughter adrift in 19th-century Argentina. (Courtesy of the Cinema Guild)

Rather than consume the movie as if it’s served to us pre-chewed, we lean in, hold our breath, suspend judgment. We’re as lost as Mortensen’s protagonist, and we feel the weight of it acutely.

Argentine filmmaker Lisandro Alonso is a hardknuckle minimalist—a leading light in what’s come to be known at global film festivals as “slow cinema.” That means his films (most famously, 2004’s Los Muertos) have received very little exposure in the States. That is, until his particular asceticism attracted the interest of Viggo Mortensen, and the two embarked on making Jauja. A little star power goes a long way in today’s attention-deficit media market—Jauja is getting a select U.S. release and healthy buzz from the film geek community. But don’t expect a Hollywood good time. The movie is slow cinema incarnate: observational, patient, inconclusive and haunting.

His stint as Aragorn aside, Mortensen has tended to eschew Hollywood fluff. Still, Jauja is an order of magnitude stranger than any of his previous projects: a desolate, threadbare odyssey through the Patagonian lowlands during the Argentine government’s late 19th-century Conquest of the Desert, a campaign to squelch the rising of indigenous peoples in the south and colonize the pampas with Europeans. Facts are hard to come by, but eventually we glean that Mortensen is a Danish aristocrat heading an earthworks project near the Atlantic coast. At first, he and his teenage daughter (Viilbjørk Malling Agger) mostly loiter and wander in the vast scrublands.

Mortensen’s character Dinesen is fraught with concern for his daughter in this wilderness, as he should be: Soon enough, she elopes (off-camera) with a young soldier and lights out for the frontier. With a mad Spanish marauder rumored to be killing and looting across the countryside, Dinesen impulsively charges west into unknown territory, searching for the girl. His fragmented, delirious journey takes up the rest of the film; in the postmodern tradition of road movies, the sojourn is a metaphor for a deeper lostness, and is doomed to never quite end.

Stylistically, Jauja (a reference not to the real Peruvian city, but to the Spanish slang for “never-never land”) is both lush and forbidding. The pampas landscape, captured by Alonso in an anachronistic 4 by 3 frame ratio, is daunting and gorgeous, while his staging is always distanced and scrupulously unpretty. Alonso’s compositions are often deliberately reminiscent of travelogue films from the 1910s and, 20s—and the frame even has rounded corners, like some early silent cinema. The individual scenes are usually shot in one take, and the passage of time is respected, rarely edited. Alonso also does not overload us with narrative data: Sometimes action occurring on a distant hillside remains a mystery. Other actions, including the fate of the daughter, are never witnessed at all.

This lack of solicitude for the audience—the real time, the featureless stretches of land and sky, the incomplete knowledge of events—is a perfect storm of cinematic minimalism. Rather than consume the movie as if it’s served to us pre-chewed, we lean in, hold our breath, suspend judgment. We’re as lost as Mortensen’s protagonist, and we feel the weight of it acutely. The semi-flat steppes all look the same in every direction, and the minutes tick by, until eventually night falls and we lose our bearings completely.

Then Jauja tiptoes into even stranger territory, as a deranged Dinesen follows a mangy old dog to a mountain cave and meets an old woman (veteran Danish actor Ghita Nørby) who talks as though she is his daughter. From there, the movie loops elliptically and makes dream-like connections that are all but inscrutable. That is, if we’re still tethered to the convenient world of three-arc storytelling and neat resolution. If we’ve been paying attention to the ideas embedded in the texture of Alonso’s film, we shouldn’t expect anything less enigmatic. Jauja has more dialogue than all of Alonso’s other movies combined, but it’s still something of a cinematic fast, a study in unknowingness and anxiety. Following naïve Europeans into the mysteries of the Third World shouldn’t be an easy voyage to parse, and our pretensions of power and control should not be indulged. As a micro-critique of colonialism, the film resonates alongside Werner Herzog’s Aguirre, the Wrath of God (1972) and Michelangelo Antonioni’s The Passenger (1975), among others, all road movies leading nowhere.