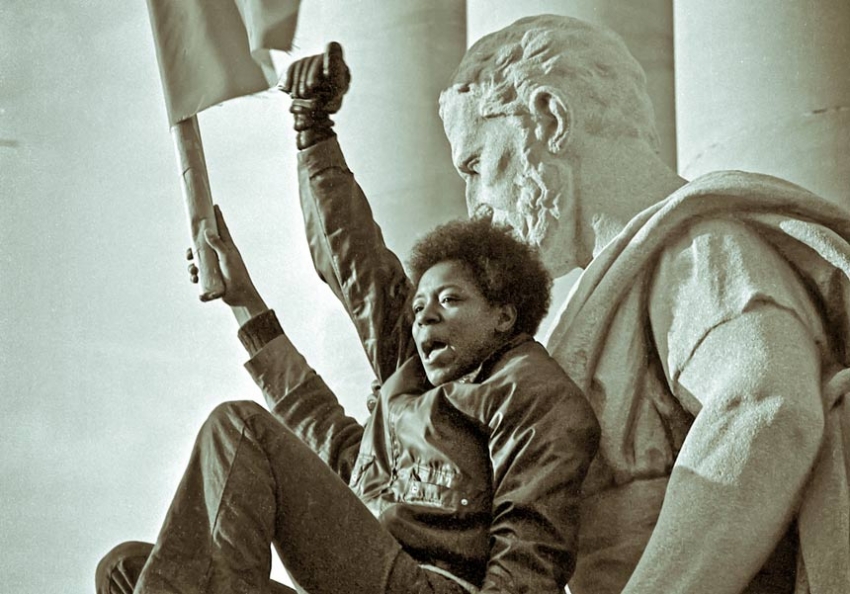 One clip features female college students down on Wall Street yelling things like ‘Look at these beautiful men!’ and ‘Those pants! They really bring out your best!’

Relatively late in She’s Beautiful When She’s Angry, Mary Dore’s documentary of Second Wave feminism, one woman makes a revealing statement: At the time they were organizing, neither she nor any of the radical women she worked with knew much about the history of the suffragettes. The women of the Second Wave were building a movement with no understanding of who had won them the right to vote.

My generation, who came of age after 1990, has that advantage: We know about the Second Wave. We may have reacted against parts of it–the transphobia of radical “womyn,” or the racism, or the liberal feminism of folks like Betty Friedan (who seemed concerned with helping middle-class white women get the same oppressive corporate jobs as middle-class white men)—but we had something to react to. The ambitions and mistakes of a past generation were available when we drew up our own blueprints for feminist action.

George Santayana’s dictate not to repeat the mistakes of the past is a burden we younger feminists shoulder. Perhaps that’s why we use “Second Wave” as a pejorative–a shorthand for the things our foremothers got wrong. She’s Beautiful When She’s Angry reminds us not to generalize about a movement so diverse in its membership and aims. The film guides us on a tour through ambitious, creative and underrated ideas from women radicalizing, tearing apart and reconstituting their everyday lives. Journalist and historian Ruth Rosen describes an action by women with post-graduate degrees who realized that they’d managed to scale the heights of academia without any serious study of women’s literature, art or political work. “We had gotten degrees and we knew nothing about women,” Rosen says. So the women assembled, with their MFAs and their Ph.D.s, and burned them. In public. “That was a very hard thing to do,” says Rosen,“because we were very proud of those degrees.”

Such courage is rare. And the women featured in this documentary possessed it–and the courage to set fire to everything else in life and the world at large. Kate Millett puts it this way: Once women’s second-class status was called into question,“everything [was] at risk.”

After all, the concept of “women’s history”–or women’s studies, as it’s come to be known–is a Second Wave concept, popularized at some cost. It was pioneered by organizations like the Chicago Women’s Liberation Union, which ran an informal women’s university with classes like “women’s sexuality” and “automobile repair.” (If you were going to leave your husband and live independently, you needed to know how to fix your own flat tire.) And it’s hard to characterize a movement as prudish when it had presses like Shameless Hussy and sponsored events in which women peered up a volunteer’s vagina to learn the lesser-known facts of anatomy.

My favorite action in the documentary–preserved, thank God, on film–is by Karla Jay, who expressed her feelings on street harassment by getting some friends together to cat-call men on Wall Street. If nothing else, it serves to demonstrate that the movement accused of killing the female sex drive was often a bunch of female college students yelling things like, “Look at all these beautiful men!” and “Those pants! They really bring out your best!!!” There was sex aplenty in these movements. It just wasn’t sex on mainstream terms.

The Second Wave was also an arts movement, arising from a cultural moment when, as author Susan Griffin says, wide-eyed, “Sometimes a thousand people would show up–for a poetry reading.” It was considered a feminist action to start an underground magazine like Rat; a feminist action for women to create their own comic strips and illustrations; and a feminist action to start a rock band–the Chicago Women’s Liberation Union was initially known for its music. The Second Wavers reclaimed women of past ages, bringing them back into the canon. It’s hard for one born after the Second Wave to realize that writers such as Jane Austen and Emily Dickinson were not considered “serious” literature before feminism. In the Second Wave, you would spend your morning campaigning for legal abortion and your afternoon (wo)manning a small press, reviving the work of George Sand, who (as Alta of the Shameless Hussy press points out) “had not been published in America for about 80 years.”

This movie steers clear of po-faced, naive hagiography or a Girl Scout chipperness–a “We can do it, girls!” tone. It deals bluntly and honestly with the movement’s tone-deaf insensitivity around race and sexuality, and its habit of cannibalizing women who committed the sin of becoming famous. Rita Mae Brown, for example, has a look of glee on her face when she describes the “Lavender Menace” action at a NOW meeting, undertaken to protest the organization’s homophobia, in which every closeted member of the organization came out at once. The movie also doesn’t commit the error of cramming women of color or queer feminists into a five-minute section; women like Fran Beal and Brown are fairly prominent throughout, and discuss things other than the movement’s failures of intersectionality. On the chipperness front, a few bits of She’s Beautiful When She’s Angry are unforgivably cheesy; points in the movement’s history are shown in low-rent, badly acted reenactments that give viewers the impression they’ve accidentally tuned into a weirdly political episode of Unsolved Mysteries. (I’d like to opine that not every feminist film ever made needs to include a scene scored to Bikini Kill’s “Rebel Girl.”) Still, for the most part, Dore steers clear of clichés to find drama in the wildness and weirdness of the movement itself. Some of the lesser-known projects of the Second Wave—like the quest to classify marriage as “unpaid labor” deserving of a pension, or the crusade for free, state-funded childcare centers (which passed Congress and was vetoed by Nixon)—feel daring today. There were excesses and mistakes. Alice Wolfson recalls dropping out while pregnant, after a directive from her group declared that “male infants were the enemy” and couldn’t be brought into the office. But there was also an inspiring commitment to push the boundaries of acceptable thought.

“We were inventing things, and that’s a very interesting edge to be on,” says Chude Pamela Allen. “You don’t have much help and you don’t have many clues about how to proceed. We were figuring it out. And it wasn’t always easy and we didn’t always do it right.”

Nor do the feminists of 2015. Reinventing the world remains, after all these intervening decades, not an easy task. But the sheer life on display in She’s Beautiful When She’s Angry–the profusion of strange and dangerous and necessary ideas and projects–revitalizes us and gets us thinking harder about how we can light the world on fire.