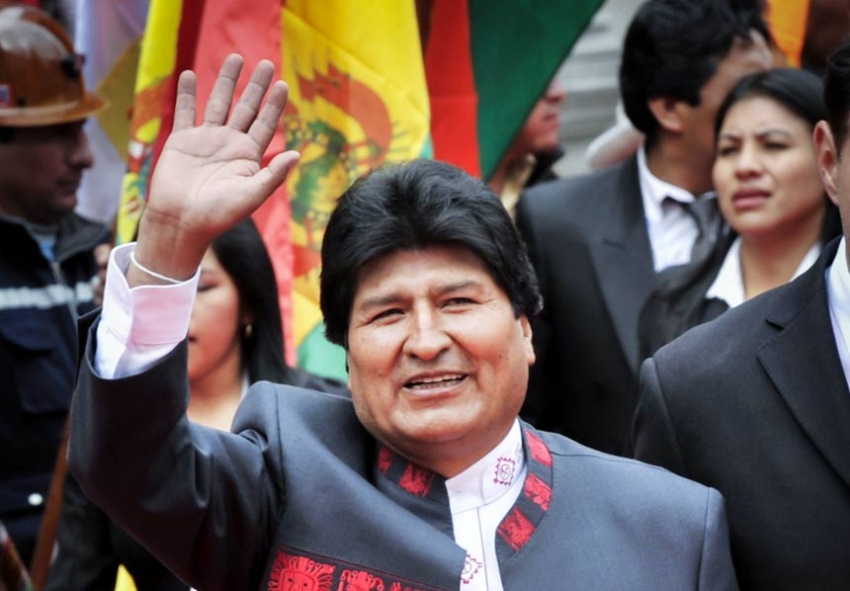 (Aizar Raldes/AFP/Getty Images) After a landslide victory, Evo Morales is sworn in for a third term in La Paz on January 22.

The Two Faces of Evo

Perhaps the boldest proposal is to institute universal healthcare coverage, virtually unheard of in a country this poor.

Ever since Evo Morales took office nine years ago, becoming Bolivia’s first indigenous president, he has been celebrated worldwide as a beacon of social and economic justice. The spectacular success of his “process of change” in reducing poverty and exclusion in South America’s most indigenous and poorest country has shaken the conventional wisdom that leftwing governments inevitably constrain growth and prosperity.

But Morales’s administration also provides a cautionary tale about the difficulty of achieving sustainability and genuine grassroots democracy in a country with a legacy of environmentally destructive natural-resource extraction and political instability. Bolivia had 14 coup d’etats in the 20th century, one of the highest rates in the world.

Morales sailed into office in 2005 on high hopes that his government would bring about a profound restructuring of society. Progressive critics argue that, instead, Morales has sidelined the social movements that put him into office and cut deals favorable to the wealthy ruling class to bring them under his party’s umbrella.

“Evo Morales has become a caudillo [populist strongman] like we have had throughout our colonial and republican history,” complains Bolivian history professor Felix Muruchi Poma.

Morales’s long-standing popularity–he won 60 percent of the vote in the October 2014 election, giving him an unprecedented third term–rests on an economic boom. Bolivia’s economy has grown faster over the past nine years than in the previous 35. The International Monetary Fund also expects it will lead Latin American growth in 2015.

Throughout its history, Bolivia has lurched from one commodity boom to another: first silver, then tin. Now, it’s natural gas, which makes up the bulk of Bolivia’s export income. Morales’s renegotiation of international gas contracts in 2006, despite companies’ threats of a pull-out, boosted government revenues to record levels.

This influx of cash went toward Bolivia’s poor, sometimes directly: The elderly, children who remain in school and mothers who participate in natal care all receive cash payments. Meanwhile, the minimum wage has more than doubled. New roads link small farmers to markets, electrification projects bring light to remote villages, and schools and health clinics are springing up everywhere.“The changes I have seen are extraordinary,” says development worker Marta Arévalo.

Despite the impressive achievements, Bolivia’s poverty rate remains at 58 percent, according to the UN Economic Commission for Latin America and the Caribbean, among the highest in the hemisphere. A trip through the highland mining town of Huanuni exposes the continued misery. Toxic runoff from the mine still slides into the local river and stinking raw sewage runs through the streets. Mining accidents and infant mortality remain alarmingly high. But changes are in evidence: A bright new bridge spans the long-dead river, concrete pipes for a new sewage system pile up on street corners, and new red brick buildings are under construction everywhere.

The grassroots, plowed under

After Morales’s 2005 election, social movements played an active role in channeling popular demands to the government. But many movement leaders assumed roles in government ministries, undermining their independence from Morales’s party, the MAS. One former advisor to grassroots organizations (who prefers to remain anonymous because he fears MAS censure) believes this process has reduced social movements to government rubber stamps.

Fundamental human rights are still honored, and a politically diverse press continues to publish–although the government has increased its control over the media in the last several years. But the government has proven adept at buying off or marginalizing its opponents in social movements, along with dissident NGOs and intellectuals.

Nor has the government been above the age-old strategy of creating parallel organizations to split social movements. “They have devastated us,” says Toribia Lero, of the highland indigenous organization CONAMAQ, which was split in two by an internal struggle over whether to support MAS unconditionally. “They have the power and resources of the state on their side.”

In February, Morales fueled fears about his anti-democratic bent when he announced that if people didn’t vote for his party’s candidates in March local elections, he would not work with any victorious opposition officials. It proved a failed strategy, as the MAS lost ground to various local opposition parties and groups. Given the MAS landslide in last fall’s national elections, the results appear to show the pull of local campaigns in the heterogeneous country, rather than a decline in MAS popularity.

Likely as important for Morales as these vote-getting maneuvers is the fact that Bolivia’s largely indigenous poor see him as one of their own. His childhood in the impoverished Aymara Indian highlands, and then as a lowland coca grower leading the resistance to the U.S.-financed war on drugs, is adroitly deployed by the MAS to solidify votes.

An emerging indigenous wealthy class owes much of its success to the economic boom and is fiercely loyal to Morales.

Some policy initiatives–such as ending gasoline subsidies in 2010, or building a road through a lowland indigenous territory in 2011–have generated intense resistance. But neither the Left nor the Right has shown much success in mounting a viable opposition.

The most ambitious government in Bolivia’s history has emerged as an activist for low-income countries worldwide, an unusual role for a country of just ten million people. At the 2009 Copenhagen World Climate Summit, Bolivia played a critical role in pushing for climate change reparations for low-income countries. The following year, Bolivia hosted more than 15,000 people at an alternative People’s Summit on Climate Change.

Morales has also drawn international headlines for his often blunt anti-imperialist rhetoric. U.S. Ambassador Phillip Goldberg was pitched out in 2008 after being accused of assisting a right-wing uprising in the eastern lowlands. By 2009, the Drug Enforcement Agency was gone too, followed by the U.S. Agency for International Development in 2013. U.S. officials did show up at Morales’s most recent inauguration, fueling speculation that diplomatic relations may be on the mend.

The MAS agenda for the next five years is to accelerate the country’s industrialization, while attempting technological leaps forward such as sophisticated new hospitals, a controversial nuclear power plant and an expansion of La Paz’s new cable car system. But perhaps the boldest proposal is to institute universal healthcare coverage, virtually unheard of in a country this poor.

To finance these projects, plans are afoot to quadruple agricultural production in the next ten years, to develop hydrocarbon operations in national parks–which often overlap indigenous lands–and possibly to frack shale gas deposits. Vice President Álvaro García Linera, often seen as the intellectual backbone of the Morales administration, insists that this growing “extractivism is a temporary and transitional state.” Long-time Bolivia researchers Niki Fabricant and Bret Gustafson argue that such a vision limits progressive options by ruling out any path to redistribution except more extraction.

Recent drops in world oil prices might be seen to threaten MAS’s plan. But Bolivia is buffered by huge oil and gas reserves. This is just another sign of how the country is in the best position it has ever been, even if Morales’s “process of change” has not proven as participatory and deeply transformative as many Bolivians struggled for.

Linda Farthing is the co-author of three books about Bolivia, most recently Evo’s Bolivia: Continuity and Change(University of Texas Press).