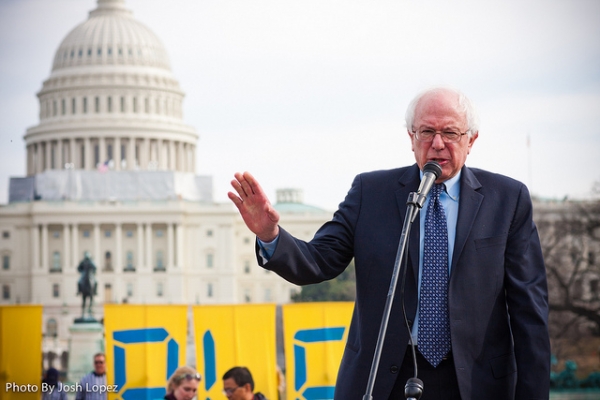 Bernie Sanders: A Candidate Worth Voting For

‘I have decided to be a candidate for the Democratic nomination for president,’ Sanders announced this morning.

"We're in this race to win," said Bernie Sanders: "If you raise the issues that are on the hearts an minds of the American people. If you try to put together a movement which says, 'We have got to stand together as a people and say that this Capitol, this beautiful Capitol, our county belong to all of us and not the billionaire class' —that is not raising an issue, that is winning elections."

The announcement by Sen. Bernie Sanders (I-Vt.), a long-time supporter of In These Times, that he will seek the Democratic Party’s presidential nomination is a historic event.

Sanders, a democratic socialist, has no problem brushing off his red-baiting critics. “I think this country,” he wrote in 2009, “could use a good debate about what goes on here compared to places with a long social-democratic tradition like Sweden, Norway and Finland, where, by and large, the middle class has a far higher standard of living than we do.” Despite running as an Independent, he caucuses with the Democrats. In January, asked if he would mount a third party campaign for president, Sanders replied, “I will not play that role in helping to elect some right-wing Republican as president of the United States.”

A Sanders candidacy offers American progressives the chance to build the infrastructure for future progressive electoral campaigns. Carl Davidson, co-chair of Committees of Correspondence for Democracy and Socialism (a New Left organization), puts it this way: “Bernie’s candidacy separates out the ‘politics-as-a-horse-race’ crowd from the ‘politics-as-an-organizing-opportunity’ gang.”

As Matt Taibbi observed in Rolling Stone, the fact that super-rich donors have no interest in Sanders’ politics requires the senator to tailor his political program to the interests of regular people. The Sanders campaign, as a grassroots project, will be backed by groups such as Progressive Democrats of America, which advocates what is known as the “inside-outside strategy.” This entails working with social movements on the outside and expressing the demands and concerns of those movements on the inside, in the internal battles of both Congress and the Democratic Party.

Unlike the 1988 Democratic primary, in which Jesse Jackson carried 11 states only to have his campaign organization disappear into the political ether, a Sanders campaign is set to build a movement with future electoral capacity. Sanders understands that the organization that coalesces behind him must survive the campaign itself and endure as a democratic counterweight to the power of big capital. “No president,” Sanders told MSNBC, “not Bernie Sanders, not anybody, will succeed [in taking on the oligarchs] unless there is a mass mobilization of millions of people who stand up and say, ‘Enough is enough. Koch brothers and billionaires can’t have it all.’ ”

Nowhere is the Democratic Party divide more pronounced than over the Trans-Pacific Partnership (TPP), the opaque trade deal the Obama administration is negotiating in secret with 11 other countries and for which it has requested “fast-track” authority from Congress. Progressive Democrats on Capitol Hill have balked at the plan, whereas corporate-friendly Obama allies, such as Sen. Ron Wyden (D-Ore.), are laboring mightily to pass it.

On April 17, giving a taste of the campaign to come, Sanders challenged Clinton to “make it clear that the Trans-Pacific Partnership should be rejected and that we must develop trade policies that benefit working families, not just Wall Street and multinational corporations.”

Sanders’ presence on the national stage will introduce millions of our fellow citizens to a coherently argued case for social democracy. We count on him to expand the parameters of America’s political imagination.