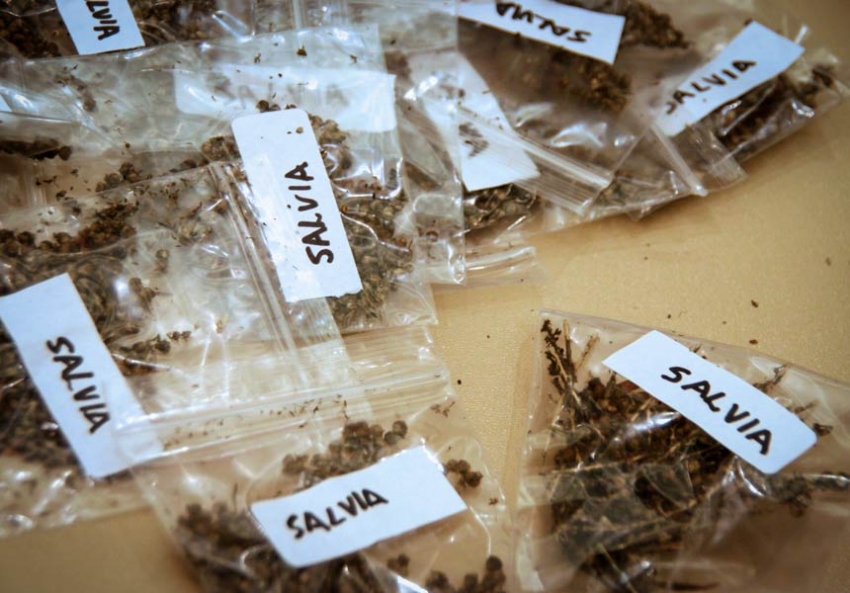 How Some Small Farmers Are Resisting Monsanto—And Climate Change

Seed sharers are resisting the death of biodiversity at the hands of industrial agriculture and GMOs.

“The fate of humankind rests in our diverse biological, genetic resources,” Fowler says. “Without diversity, our crops won’t adapt to climate change. And neither will we.”

The local food movement has brought a newfound cultural focus on farming. And in the United States, gardeners, farmers and eaters are fueling a groundswell of interest in its smallest part: seeds.

Hundreds of seed exchanges—in which hobbyists and professional green thumbs share the most resilient plants from their crops—have sprung up across North America over the past decade. Recently, state agriculture departments in Pennsylvania and Minnesota have moved to restrict the practice, citing concerns about safety and the spread of invasive species. Advocates cite this as evidence of a double standard by regulators, who they say scrutinize small farmers while shielding Big Ag. Meanwhile, the seed-sharing movement continues to grow.

Cary Fowler extolls seed exchanges as “the first line of defense” against the loss of biodiversity. Fowler is the founding visionary of the Svalbard Global Seed Vault, a frozen repository in the Norwegian permafrost where millions of seeds from around the world are preserved. In a forthcoming documentary from director Sandy McLeod, Seeds of Time, Fowler offers a compelling perspective on the significance of seeds.

“The fate of humankind rests in our diverse biological, genetic resources,” Fowler says. “Without diversity, our crops won’t adapt to climate change. And neither will we.”

Industrial agriculture prefers, instead, uniformity: F1 hybrid seeds for many common fruits and vegetables, and genetically modified seeds for commodity crops such as corn, soybeans and sugar beets. In the 1930s, agricultural companies began breeding and patenting hybrid seeds en masse. These seeds produce a single generation of a highly uniform crop, such as the bright gold and super-sweet Sungold cherry tomato. The second, or F2, generation of plants grown from this seed, however, yields a wild mix—in the case of Sungold, fruits of all colors and flavors—that is typically unwanted.

To produce Sungold cherry tomatoes year after year, a farmer has to purchase new seeds again and again. Initially, few farmers were interested in this type of seed. But for a new generation of industrial farmers, supported by U.S. agricultural subsidies, seeds that could produce a uniform, high-yield crop were appealing.

Then, about 30 years ago, the science of agriculture changed again, with the first field test of genetically modified crops in 1987. GMOs have since come to dominate the commodity market. For example, we now have millions of acres of crops planted to resist the herbicide glyphosate, the active ingredient in Monsanto’s Roundup. Companies like Monsanto profit by selling both the herbicides and the seeds for resistant crops. These genetically identical crops are bringing worldwide agricultural diversity and resilience to an all-time low.

And yet, in a constantly changing world, the diversity and adaptability of our crops is the foundation of our future food security. Those traits lie in the open-pollinated seeds that our ancestors saved and sowed for 12,000 years. Fertilized naturally (rather than in controlled, human-made environments to ensure uniformity), open-pollinated seeds produce plants whose next generation is similar, but not identical, to the previous generation. When farmers select their seeds from each new generation, they are selecting for genetic diversity and regional adaptation. Much as a diverse stock portfolio offers resilience in turbulent economic times, this biodiversity offers resilience in a changing climate.

That’s where seed exchanges come in. Historically, seed sharing would have looked like hands passing seeds over a fence. Currently, seed sharing takes the form of Internet searches, trips to the mailbox, and small gatherings to exchange seeds as well as stories.

The seed-sharing meet-up has its roots in Canada, where the first official “Seedy Saturday” was held in 1989 in Vancouver and drew 500 avid participants. Today, Seedy Saturdays are among hundreds of events held across North America to provide a venue for thousands of gardeners, farmers, seed companies, nurseries and gardening organizations to exchange ideas and seeds—the vast majority of which are open-pollinated.

The Seed Savers Exchange (SSE) in Decorah, Iowa, provides another way for seed savers to share biodiversity. Since 1975, SSE has published an annual yearbook of members’ open-pollinated seed offerings. More than 13,000 members now list tens of thousands of seed varieties, and more than a million seed samples are exchanged annually.

The Webster Public Library in New York is an example of the thousands of seed libraries that now exist, offering seeds to be checked out, sown and grown, and “returned” (if possible) when new seed is saved later in the season.

Small seed companies committed to growing open-pollinated, regionally adapted and often certified organic seed are also springing up. Frank Morton of Wild Garden Seed in Oregon has been developing varieties of lettuce for more than two decades. His lettuce displays an astonishing diversity of color, texture, flavor and disease resistance, and is well-adapted to the hot, arid summers and cool, wet winters of the Willamette Valley. Morton has also partnered with Oregon State University to create resources for small farmers and served on a state taskforce convened to examine regulation of genetically engineered crops.

Fruition Seeds in New York state collaborates with local organic farmers and Cornell University to cultivate open-pollinated seeds that thrive in the Northeast. The group also partners with regional food distributors such as Foodlink. When Fruition Seeds grows winter squash for seed (rather than for eating), for example, it yields thousands of pounds of certified organic squash flesh as a byproduct. Foodlink processes and sells that squash while saving, cleaning and drying the seed for the grower.

From a rich history put on pause, farmers are beginning to reclaim the legacy of open-pollinated seeds. Farming is challenging, and growing seed is no exception. But it is the ability to adapt to ever-shifting conditions that allows our farms—and indeed, all of us—to thrive. We need time, commitment, attention to detail and, above all, patience. A single saved seed can increase genetic diversity for generations.

Petra Page-Mann is a farmer and the founder of Fruition Seeds.