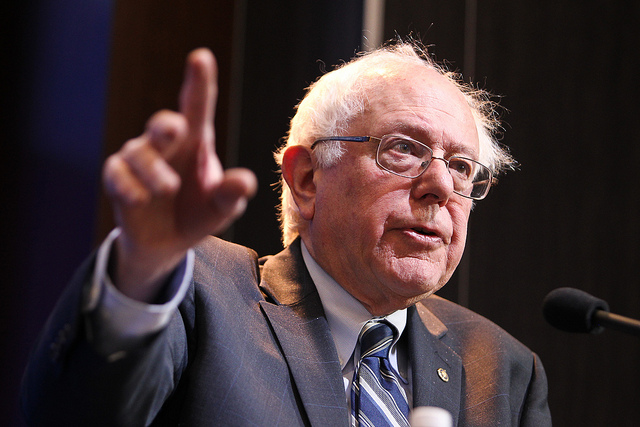 Why Radicals Like Bernie Sanders Should Run As Democrats, Not Independents

The Left should take a page from the Tea Party’s playbook and take power from within the Democratic Party.

At the current conjuncture, it’s strategic for radicals to run as Democrats.

Senator Bernie Sanders, the socialist from Vermont, is running for president. Even more ambitiously, he told ABC’s George Stephanopoulos that he wants to lead “a political revolution in this country.” And he’s doing it as a Democrat.

In the wake of his announcement, some on the pragmatic left rushed to make the socialist safe for mass consumption. “Bernie Sanders is not Bukharin or Trotsky,” Rolling Stone’s Matt Taibbi assured readers, while Thor Benson took to the New Republic to demand the media stop calling Sanders a socialist (he’s a democratic socialist). The Huffington Post’s Jonathan Cohn went even further. Sanders “isn’t actually that far to the left,” Cohn said, and ultimately, “the label doesn’t mean a whole lot anyway.”

While the pragmatists were busy rounding off Sanders politically sharper edges, some on the radical left dismissed Sanders as a sellout. Ashley Smith wrote in Jacobin that by running for president as a Democrat, Sanders “is acting as the opposite of an ‘alternative.’ ” Smith went on to say that the Democratic Party has “co-opted and changed Sanders,” approvingly quoting David Swanson’s call for leftists to “put our resources into uncorrupted, principled, policy-driven, nonviolent, creative activism” instead of the Sanders campaign.

The debate is about more than Sanders alone. While it’s clear that we live in the midst of a populist moment, many of the pragmatists continue catering to the center—ready to woo independents and endorse whoever sports a “D” behind their name. And many on the radical left, as always, disavow the idea that a political revolution can be waged from within the Democratic Party. Instead, they claim that only a third party candidate could offer a pure, uncorrupted assault on big money politics.

But these pragmatists and radicals are wrong. At the current conjuncture, it’s strategic for radicals to run as Democrats. For proof, we should look to the Right.

In recent years, the most successful radicals in the country have been operating on the Right. The Tea Party, as an insurgent movement within the Republican ranks, has achieved breathtaking success in a remarkably short period. Despite the fact that Tea Party ideas are unpopular with the public as a whole, they’ve galvanized a highly energized base to pull the Republican Party rightward.

Key to their success has been their use of the primary as a field of struggle. Primaries typically involve less money and lower turnout than general elections. For this reason, a small but highly energized and motivated base can have an oversized impact. Once Tea Party insurgents began to take out centrist incumbents, even the threat of a primary began serving to put centrists in line with the radical right.

Radicals on the Left should take note. And so should pragmatists. While the unpopularity of Tea Party views among the public should ultimately—we hope—limit its rise to power, the majority of Americans hold views to the left of many current representatives of both major political parties. By mobilizing a determined volunteer base, we can counter the power of big money and exploit the gap between Democratic incumbents and their constituents. In other words, we can use the primary to our own advantage. As we can awaken and embolden the progressive majority, we can demonstrate that moving left is a winning strategy for Democrats.

Now, as Smith and others point out, there have been past attempts to transform the Democratic Party from within—and they’ve failed. Michael Harrington urged fellow socialists to work within the Democratic Party. Jesse Jackson, Al Sharpton and Dennis Kucinich all made attempts to push the party left by running for president on the Democratic ticket. If these other attempts have failed, why should we expect the strategy to succeed this time?

If the effort remains confined to Bernie Sanders and the top of the ticket, then I would agree that it has little chance of succeeding. One bold campaign by a lone politician does not a movement make.

But there is considerable tension building within the Democratic Party as senators like Elizabeth Warren, Sherrod Brown, and Jeff Merkley rise to prominence. The big banks’ threat in March to withhold funding from Democrats in response to Warren’s calls to break them up shows just what a danger the rising progressive wing is becoming to corporate capital’s grip on the party. If hundreds of radicals run in down ballot races as Democrats, we could create a serious war for the soul of the party. (Groups like National People’s Action Campaign and Progressive Majority are already moving to make this happen.)

At the end of the day, the objections from Smith, Swanson and others have a quasi-religious tinge to them. The two major political parties, we are told, have been and will be the parties of capital. For this reason, we are counseled to avoid defilement at the hands of the Democrats and to take on other uncorrupted pursuits. But it is vain to fetishize purity at the cost of power. Better to step onto the field of struggle and risk defilement than relegate oneself to the sidelines.

There is, nevertheless, a serious question for radicals of how one can move, rather than be moved by, the dominant power structure. But that’s not a question of political parties alone. The reality is that during the last 40 years, the dominance of neoliberalism has meant that the rise to power of any politician, no matter how staunchly progressive, involved capitulating to the system. Indeed, some degree of compromise will always be a condition for democratic power—a reality that purists fail to grasp. But as the neoliberal consensus collapses, new space is opening up for radicals to transform the system—including the Democratic Party—rather than be co-opted by it.

We must determine, then, the best way to exploit this opening. We can build independent political organizations that work to transcend neoliberalism by holding candidates, including radical candidates, accountable to the principals of the movement without necessarily building a third party from the ground up. There is nothing antithetical about the idea of such independent organizations supporting radicals running as insurgent Democrats. Indeed, there’s something quite strategic about encouraging candidates to do so.

Of course, nothing about this strategy precludes independent political organizations from also encouraging candidates from running on a third-party ticket where and when it makes sense. As Seattle’s socialist city council member Kshama Sawant’s victory shows, there are certainly contexts in which third party candidates are also forcing electoral politics left.

But at the federal level, the Democratic Party is the primary field of struggle. And Bernie Sanders, rather than herding more activists into the Democratic fold, could help fuel the insurgency.

Jacob Swenson-Lengyel is an organizer and writer who lives in Chicago. He completed an A.M. in philosophy at the University of Chicago before becoming involved in political work full time. Read more of his writing at https://jacobswenson.me, follow him on twitter @_JacobSL, or check out his Instagram @SignsOfResistance2017