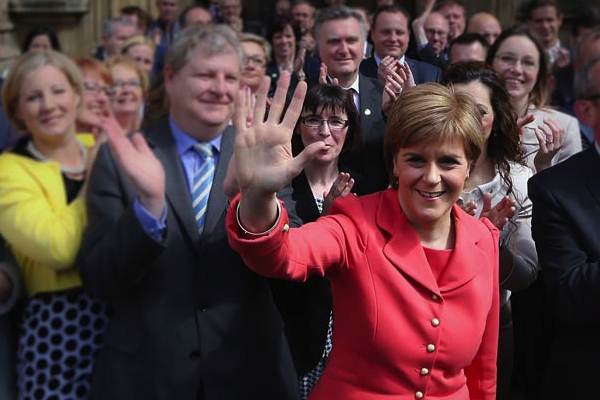 Nicola Sturgeon, leader of the Scottish National Party—one of the only bright spots in the recent elections.

Austerity: The Real Winner of the UK Elections

The election has given us an even more right-wing version of the status quo.

I shall be 87 when I next vote in a general election, the principal manifestation, I suppose, of the many “shrivelled forms of democracy” available to us, as Noam Chomsky put it. I should be grateful for living in a country where people are able to express and vote for diametrically opposite things. Yet May’s election delivered the familiar thud of disappointment. The polls told us that there would be a hung Parliament and that Labour might well have the most seats in it. However, the Tories ended up with a majority of 12. This election felt more etiolated than usual, a matter of misleading opinion polls, hasty and unconvincing postmortems, and no serious proposals from anyone to improve things. For instance, how miraculous it would have been if a newly elected government offered, before anything else, to take its fair share of North African refugees who nearly drowned in the Mediterranean.

The election itself has given us an even more right-wing version of the status quo. It’s not, I should make clear, that any of this has especially dire consequences for the old, since Tory and Labour are relatively tender of our feelings, knowing that we vote. It’s the future for the young we need to fear.

A so-called majority government elected by just 24 percent of the registered electorate will complete its dismantling of the welfare state and destruction of the state education system. It will tell us that it is in favour of hardworking families and refer to itself as practising “Blue Collar conservatism,” but it won’t insist on a living wage, nor will it invest in the sort of programme that would provide jobs. It will proceed with its withering austerity policies, cutting £12 billion from what’s left of welfare and take us to the brink of leaving the European Union, at the very least—mainly in order to curtail public benefits for migrants. There are plans to ditch the Human Rights Act of 1998 (adhered to by every other European country except Belarus) in favour of a British Bill of Rights Act, whose main purpose, many fear, is to to ban and deport those suspected of harbouring non-British values.

Yet I am obliged to accept that more people wanted those things to come about than wanted the alternatives. The Lib Dems always knew that entering a coalition with the Tories might result in their destruction, and it has. Labour is listening to a mantra of “aspiration and inclusion” in its search for a leader who isn’t Ed Miliband, thought by the old guard to have focused excessively on inequality. Ed and his family have gone for a well-earned holiday on Ibiza, leaving an unpleasant trail of “Red Ed” newspaper headlines and jokes about his tussles with a bacon sandwich, which are covertly anti-Semitic.

Nearly four million people voted UKIP (United Kingdom Independence Party), whose main platforms are leaving Europe and reducing immigration, but it managed to elect only one MP. Our only Green MP, the admirable Caroline Lucas, also increased her vote: both reasons for reforming our voting system from First Past the Post to some kind of proportional representation.

Only Scotland, in its usual awkward way, has been interesting. The Scottish National Party lost the referendum for independence last summer but elected 56 Scottish Nationalist MPs, leaving Scotland with only one MP each from the Tory, Labour and Liberal parties. They are now the third-largest party in Westminster and could cause all sorts of trouble there. I find myself hoping very much that they will, though the encouragement that will give to their achieving independence may be a heavy price to pay. They won’t want to leave the European Union, they’ll object to renewing Trident (Britain’s nuclear weapons programme), and they’ll certainly oppose austerity.

Only 66 percent of those who could have voted did so. And according to one poll, 60 percent of voters want to change the voting system to some form of proportional representation. It’s all a bit of a mess. I’m not as a rule given to quoting Churchill, but perhaps I will now. “Democracy,” he pointed out, “is the worst form of government, except for all the other forms that have been tried from time to time.”