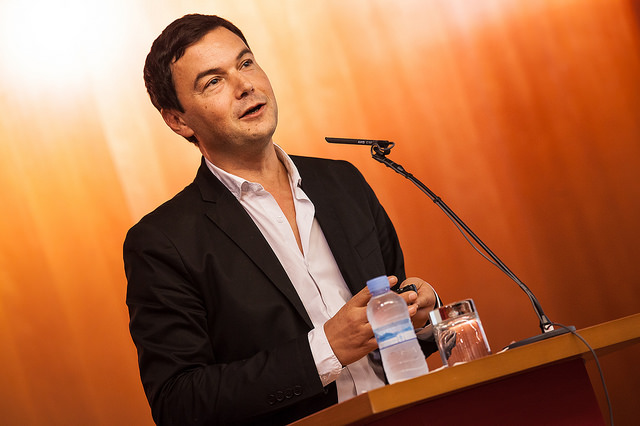 Economist Thomas Piketty was one of more than two dozen signatories of the letter. (Universitat Pompeu Fabra / Flickr)

The economists called their letter a “plea for economic sanity and humanity.”

In an essay published on Friday morning in the Financial Times, 26 of the world’s most renowned economic minds proclaimed their solidarity with Syriza, Greece’s ruling anti-austerity party.

The article’s authors—a group that includes Joseph Stiglitz, Thomas Piketty, Marcus Miller and former Prime Minister of Italy Massimo D’Alema—summarized their message as a “plea for economic sanity and humanity.”  Arguing that the fate of the European Union depends on the ability of Greece and its creditor institutions to compromise, they demanded that the European Union provide “forbearance and finance to promote structural reform and financial recovery,” and that Greece demonstrate “credible commitment” to reform and playing “a positive role in the EU.”

At the center of the article is austerity’s failure to remedy Greece’s economic woes. “Austerity drastically reduces revenue from tax reform,” they write “and restricts the space for change to make administration accountable and socially efficient.” Moreover, they continue, “the constant concessions required by the government mean that Syriza is in danger of losing political support and thus its ability to create a program that will bring Greece out of the crisis.”

At stake, they say, is nothing less than the failure of Greek democracy and the rise of “much more radical and dysfunctional challenges, fundamentally hostile to the EU.”

Founded in 2004 as a coalition of leftist parties, Syriza came to power in January 2015. Having vowed to repeal the austerity measures imposed upon the Greek government by the European Commission, the International Monetary Fund (IMF) and the European Central Bank in the wake of the global financial crisis, Syriza now faces the difficult task of turning its promises into realities.

Some, including American Senator Bernie Sanders, fear that Syriza’s failure to achieve its goals will mean a substantial increase in popular support for Greece’s fascist Golden Dawn party. A political victory for Golden Dawn presumably numbers among the “challenges” to democracy and the EU Stiglitz et al. predict in the event of Syriza’s failure to end austerity.

If the European Union fails to adequately address the widespread suffering caused by austerity, Syriza may also choose to leave the Eurozone, thereby defaulting on its loans. Such a decision could undermine not just the European Union’s integrity, but could call its very legitimacy as a supranational organization into question.

The economists’ essay appeared in the Financial Times at a moment when prospects look increasingly grim for both Greece and Syriza. This week, the Organization for Economic Cooperation and Development (OECD) released predictions of rising unemployment in tandem with a ballooning debt-to GDP ratio. These setbacks can only deepen what even the European Union refers to as a Greece’s “humanitarian crisis.”

Whether or not the European Union will heed the 26 economists’ call for an end to austerity remains to be seen.