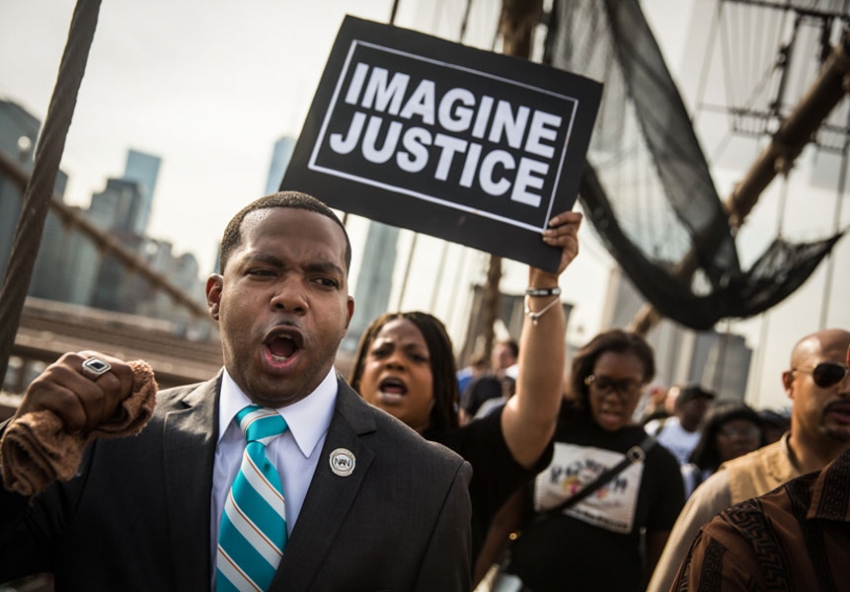 Civil Rights: The Next Generation

'I think that this movement, whether we call it Black Lives Matter or whatever, is a ray of light. It’s the most important thing in black political life in a generation.'

In a widely circulated exchange during the community uproar in Baltimore over the police killing of Freddie Gray, CNN’s Wolf Blitzer assailed the protesters for looting and property damage, while activist DeRay McKesson strove to keep attention on the pervasive, everyday violence by police against Black people. “There’s no excuse for that kind of violence, right?” Blitzer asked.

“Yeah, and there’s no excuse for the seven people the Baltimore City Police Department has killed in the past year either, right?” McKesson shot back. “You are suggesting this idea that broken windows are worse than broken spines.”

The exchange revealed the disconnect between mainstream media interest in the “violence of rioters” and the efforts of organizers on the ground to bring attention to the structural violence of poverty in American cities, and the actual violence of policing. Still, the power of highly visible, disruptive street protests in affecting national discourse and transforming the consciousness of participants is undeniable, and is drawing comparisons to the black uprisings of the 1960s.

Where will the movement go next? It seems clear that the injustices of the past remain unresolved, but are the strategies of an earlier generation sufficient to meet contemporary challenges?

Is there a way to convert the energy of the recent protests into a sustained movement?

FRANCES: People ask, “How can we transform movements into long-term, left, progressive organizations?” But the assumption that movements are a flash in the pan is wrong. Movements have considerable transformative power in themselves and can last a long time. The movement in Latin America that transformed South America began as anti-austerity, anti-structural-adjustment protests against the IMF. Several decades later, it had transformed the governments of many South American countries. It’s hard to know exactly when a movement begins and ends, but the civil rights movement certainly began by the mid-1950s and lasted at least 18 years, and in some senses continues to exist.

CHARLENE: What’s happening right now is that a number of new folks are just being politicized. They are building their analyses and then figuring out what they want to do. One of the challenges is that you have folks who have been doing this work for decades in a very particular way that is in conflict with the values and the ideals of many folks who are also coming into this work for the first time because of police killings. The new folks are bringing a different analysis around things like queerness, blackness, feminism.

Movement work does not happen without funds. Where are the resources going? Who has control over resources? We’re just getting started, and we’re seeing new leaders and new organizations that have fundamental differences, and also some similarities, with black freedom organizations of the 1960s and 1970s.

KEEANGA: This movement is in its infancy. And that requires a certain level of patience within a context of the need to be urgent—an urgency that comes from the fact that people continue to be killed by the police. The last 10 months, which have been bookmarked by two rebellions, one in Ferguson and one in Baltimore, have seen an incredible amount of local organizing that is being referred to in some places as the Black Lives Matter movement. The question is, how do you respect the local organizing and knit it together across the country into a national movement that can raise national demands?

At this point, have we seen any reforms or concessions?

CHARLENE: In St. Louis, a measure for an independent police accountability board has just passed, but that’s also reflective of years of organizing. Perhaps this moment serves as the catalyst. There is more transparency and accountability over at the LA County sheriff ’s office. And in Newark, Mayor Ras Baraka installed a civilian review board that actually reflects the demands of people and organizations in Newark. Here in Chicago, we won a reparations ordinance for survivors of police torture under Commander Jon Burge. That organizing took place over decades, but we would be remiss if we didn’t say that the victory was connected to what’s happening right now.

FRANCES: If we looked closely, and nobody has done this in a thorough way, we would see moderation of police street policies in the cities. But it’s also important to locate Black Lives Matter, the movement against police brutality, in the larger context. As deindustrialization has proceeded in cities over the last several decades, our policies have focused on controlling, disciplining and incarcerating the people who have been made superfluous as a result. We’ve imprisoned millions of young minority men, and we harass them on the streets because we don’t need them anymore to do the work of an industrial economy. In that sense, the Black Lives Matter has a deep connection to the Fight for $15, because both of these movements are protesting against exploitation and exclusion and stigmatization. So it’s not going to be over in a moment, and we’re not going to win easily. It’s a struggle at the very heart of the American economy, and American cities, and American race relations.

Where is the movement headed?

KEEANGA: This is a different era from the ’60s, where you could often point to the eruption of rebellions and then some type of tangible program from the state. A recent poll found that 96 percent of Americans expect some kind of violence in their cities. And that means police are heavily armed in response. Look at Cleveland in late May, when police mobilized to try to intimidate protestors from coming out. That exhibits the difficulty of this fight. As Frances said, this is not just about policing—this is an economic issue that the state has no real resolution to.

They’ve cut the public sector, they’ve turned work into low-wage meaningless work that people can’t survive on, and created a situation where the police become the last functioning public institution, one that is used to maintain the status quo.

FRANCES: And even to make money, as we saw in Ferguson. The DOJ report revealed the extent to which police were criminalizing poor people in Ferguson just to eke out meager revenues.

CHARLENE: In New York, when the police went on a work slowdown and stopped writing tickets, in response to Mayor de Blasio making very mild statements about police violence, it cost the New York City Hall $10 million a week. So not only do we need protests, we also have to start thinking about a completely different kind of society, one that doesn’t rely on police to raise municipal funds and to brutalize communities of poor and working-class people. This is a long and important struggle that we’re just at the very beginning of.

FRANCES: The issue isn’t violence. People who are excluded from important roles in major institutions often have to become disorderly and disruptive and make trouble. And then they are called violent. But the kind of violence that the crowd makes is typically minor. It has to do with breaking windows, not killing people. But this accusation of violence turns public opinion against the people who are trying to have a voice, who are trying to be participants in a political conflict. So it’s important that we be very alert to the abuses of charges of violence.

KEEANGA: Terrible things have been happening to black people around this country, but at the same time, I think that this movement, whether we call it Black Lives Matter or whatever, is a ray of light. It’s the most important thing in black political life in a generation. And that’s a reason for optimism. People are trying to figure out not just how to get this or that police officer arrested, but how to question the entire regime of violence that pervades so much of our lives. And, for that, we should be hopeful about the future, because people are trusting each other to try and end this in ways that we haven’t seen in a long time.

CHARLENE: It’s important for us not to pit so-called good protesters against bad protesters or violent actions against so-called nonviolent actions. Because what we see and what we will continue to see is a physical manifestation of people’s rage and just hurt and pain, and their desire to declare, “No more. I’m here, and this has to change.”

Martha Biondi is a professor of African American Studies at Northwestern University and author, most recently, of The Black Revolution on Campus.