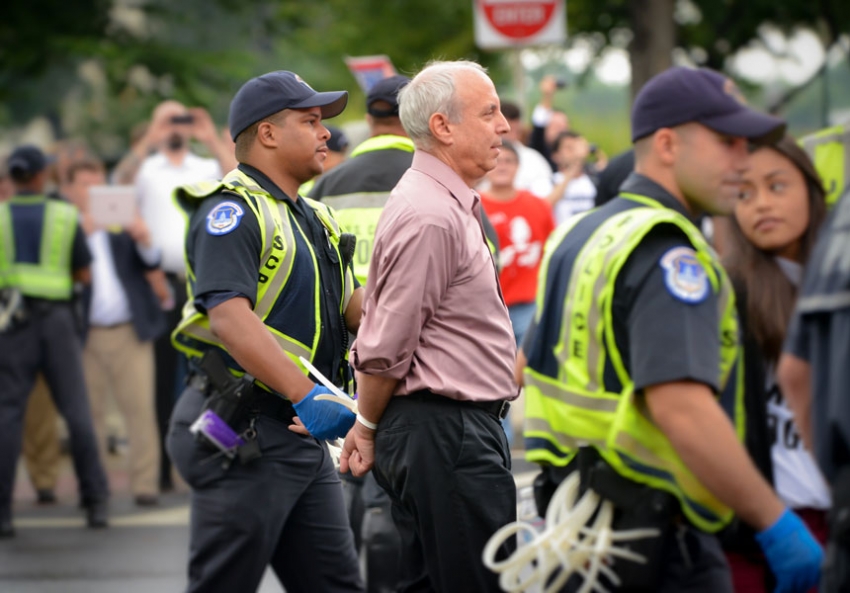 Larry Cohen is arrested at an August 1, 2013 rally for immigrant workers’ rights outside the U.S. Capitol. (Courtesy of Jay Mallin Photography)

Going Beyond Labor’s Limitations: Larry Cohen Reflects on His Time as a Progressive Union President

An interview with Larry Cohen, outgoing Communications Workers of America president, on how the U.S. labor movement can go bigger.

If labor is going to be just a group of unions with different strategies, it’s not going to be a movement. We need to be organizing other people. But given the barriers in the United States, that can’t be primarily around workplaces or collective bargaining.

In early June, Larry Cohen stepped down from his 10-year tenure as president of the Communications Workers of America (CWA), the 700,000-member union of telephone, airline, broadcast, journalism (including In These Times’ staff), and government workers, among others. “That’s unusual for union guys, who like to stay when they’re at the top,” says Martin Morand, a former labor studies professor and organizer.

But Cohen has often departed from the usual. He promoted internal union democracy and membership involvement far more than the average union leader, and mobilized labor for causes that stretch the definition of union politics—from strong environmental action to electoral reform.

“George Bernard Shaw observed that trade unionism is not socialism,” says Morand. “It’s capitalism of the proletariat. But Cohen saw it as a social cause—not an end in itself but a means of transforming society.”

Cohen began his CWA career in the mid-1970s. As a mental health and social services worker in New Jersey, he initiated a campaign that eventually brought 40,000 state workers into the CWA. He rose in the ranks and was elected president in a sharply contested 2005 election.

Along the way, Cohen helped organize Jobs with Justice, a labor and community alliance that promotes solidarity—the historic but languishing heart of unionism—by urging the groups’ members to show up at least five times a year to support the fight of other unions or community groups.

In 2013, Cohen led the CWA, along with the Sierra Club, Greenpeace and the NAACP, in convening the Democracy Initiative to pursue structural political reforms.

Cohen spoke with In These Times about his retirement and what’s next—for him, and for the labor movement.

At 65, you’re younger than most retiring labor leaders. Why did you step down?

After 10 years as president, working at least 80 hours a week, it felt like the right time. I’m not complaining; it’s been an honor every single day. But working overwhelmingly within the labor movement, accepting the fundamentally transactional nature of trying to serve the members, creates limitations. I say to CWA-ers, “If your goal is solely your upcoming contract, those contracts are mostly going to be disappointments, unless we turn around what workers’ rights are like in America.”

If labor is going to be just a group of unions with different strategies, it’s not going to be a movement. We need to be organizing other people. But given the barriers in the United States, that can’t be primarily around workplaces or collective bargaining. Most Americans aren’t organized into anything in terms of a populist movement for economic justice and democracy.

Do U.S. unions have a less unified political agenda than labor movements in other industrialized countries?

Yeah, less for sure. That tension over whether the main federation of unions can agree on a common strategy has been there since the merger of the AFL and the CIO in 1955, and I don’t think it’s improved enough. Meanwhile, the labor movement has unified in some other countries, such as Brazil, South Africa and Germany.

We need reality therapy here. The United States is ranked at the bottom in workers’ rights by the International Trade Union Confederation. We’re in category four out of five, and the ones who are five have no rule of law, like Somalia and Ukraine. The fours include countries like Iraq, Peru and Mexico. Even with the violence in Mexico, I have more hope about significant changes in Mexico than here.

Significant structural reform in American politics has to occur along with economic justice campaigns or else people will simply yawn with indifference at the structural reforms. We connected the need for Senate filibuster and rules reform to the presidential appointment battles that were critical to unions, environmentalists and consumer advocates. This helped confirm members of the National Labor Relations Board, the EPA administrator, the director of the Consumer Financial Protection Bureau director and, eventually, more than 80 federal judges. Linking structural reforms with substantive goals provides a roadmap for organizing for democracy going forward.

No other democracy functions like this, and if we don’t take it head on, economic justice and other issues will be blocked. We have to test a new organizing frame that links voting rights, money in politics and Senate rules with core economic and social justice issues.

I would credit him for absolutely believing in working together. For the AFL-CIO there are limits, because of what the 55 or so affiliates demand. Then there are unions that aren’t even in the tent. So we have a culture that says, “You can be in or you can be out.” And that kind of culture limits how much the federation can push.

How do you assess non-traditional organizing campaigns like the UFCW-backed Our Walmart, or the SEIU-backed Fight for 15?

They are models of what we need to do and are at least as important as political activity. They speak directly to working people, rather than hoping to elect those who will then speak for working people. One of the advantages of the $15 an hour minimum wage demand is that, over time, it sounds more and more realistic. The question is: How do we make such organizing sustainable and get results?

Do you think the Fight for 15 will transform into an official, recognized McDonald’s union?

Yes. To the extent that it wins mass support, which it is doing.

In a similar vein, is there a chance of stopping the Trans-Pacific Partnership (TPP)?

The vote in the House is too close to call. But currently [in late May] 85 percent of House Democrats are voting no. So much for the president as the leader of his party. The work against fast track is a massive coalition of green, faith, community groups, immigrant rights, students and consumers.  Like the Senate rules campaign, it points to the kind of populist coalition that is possible. It’s hard, because you’ve got to get to focus on the issue, but once you do, 95 percent of Americans are on your side. Unless they have what I call a skyscraper job, working in a headquarters of a multinational, people are losing out in these agreements.

Why have the Democrats been so bad on globalization?

Democratic presidents—Obama and Clinton—have been bad. It’s a combination of how the State Department functions day to day, how the National Security Council functions and how a president gets elected—via big money. And the U.S. Chamber of Commerce and the Business Roundtable know how to work the White House; they’re relentless.

But Senate Democrats are probably better now than they’ve ever been. Fourteen of them made me crazy when they voted on May 22 to fast-track the TPP, but I have to keep reminding myself that 30 didn’t. I credit people like Sherrod Brown and Elizabeth Warren. Amazing leadership.

What’s next for you?

I’m going to continue to chair the board of and help build out the Democracy Initiative, which now is supported by more than 50 unions and progressive groups.

Is there something about the American working class that makes it resistant to collective organization?

Historically, the answer has been yes. American workers have paid a heavy price for not embracing a multicultural society, and for thinking that, if they weren’t under attack, they and their families didn’t have to worry. The result has been disastrous. Younger workers today are much more multicultural. Going forward, we have to hold on to that progress but continue to tackle the issue head on. As an old labor song goes: “Unity doesn’t fall like a summer rain. You have to work for it and fight for it, day and night for it.”

CWA is a sponsor of In These Times. Sponsors have no role in editorial content.