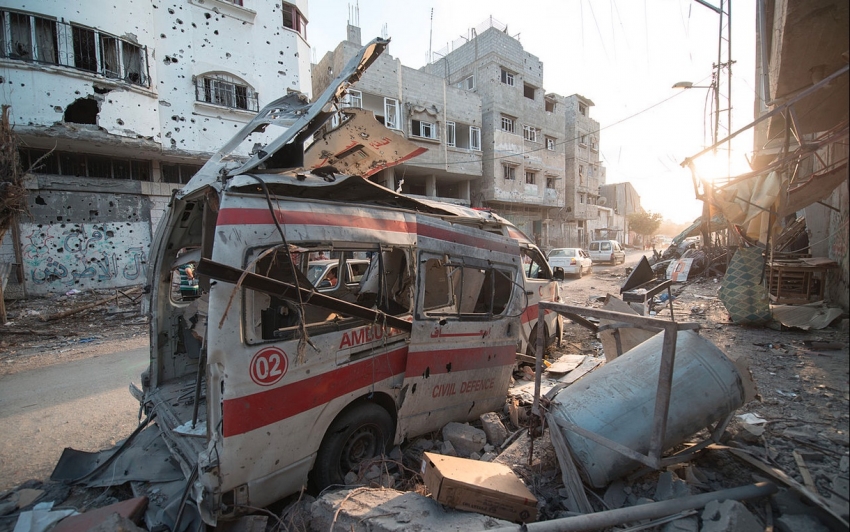 A destroyed ambulance in Shuja'iyya in the Gaza Strip on August 6, 2014. (Boris Niehaus / www.1just.de)

In Max Blumenthal’s ‘The 51 Day War,’ Life in Gaza Looks Bleak, But Resistance is Growing

Blumenthal offers an unembellished look at the misery on the ground in the Gaza Strip during Israel’s Operation Protective Edge in 2014.

Blumenthal allows the young men and women of Gaza to speak.

When American journalist Max Blumenthal arrived in the Gaza Strip on August 14, 2014, it was the 38th day of Israel’s bombardment of the coastal enclave. By the time Operation Protective Edge ended on August 26, over 2,100 Palestinians had been killed, including more than 1,500 civilians and over 500 children, and over 10,000 wounded. With more than 7,000 homes destroyed and 10,000 more severely damaged by Israeli bombing, approximately 30 percent of the 1.8 million residents of Gaza were internally displaced, with hundreds of thousands needing emergency food assistance and seeking shelter in UN-run schools.

Blumenthal’s new book, The 51 Day War: Ruin and Resistance in Gaza, lays bare some of the names, faces and experiences behind these statistics, and stands both as a harrowing account of the destruction wrought by the Israeli army, and a testament to the resilience and strength of the Palestinian people. The book takes us inside the halls of hospitals overflowing with wounded patients and the corpses of innocent adults and children; through the streets of shell-shocked cities and towns, flooded with refugees dodging shrapnel, frantically searching for loved ones and fleeing for safety; and across the blood-stained courtyards of UN schools scorched and decimated by Israeli airstrikes.

Flipping through the pages of The 51 Day War, the reader is confronted by countless atrocities. A teenager sobs as he speaks of his brother, a bright accounting student killed by an Israeli sniper as he searched for missing family members in the rubble of his home. Another man describes witnessing an Israeli soldier execute an elderly neighbor, without explanation, in front of terrified and captive onlookers. A family tells how, under Israeli bombardment, they took to the streets and fled their neighborhood engulfed in flames, illuminating the way with cell phone flashlights as all around them, homes crumbled and civilians perished under Israeli shelling.

During the 51 days of Operation Protective Edge, the Israeli army fired 3 million bullets into the densely populated Gaza Strip—almost two per resident—and dropped around 20,000 tons of explosives, equivalent to one of the atomic bombs dropped by the US on Japan in 1945. Israeli forces attacked hospitals, ambulances and medical staff, power generation and water supply infrastructure, cemeteries, commercial centers, schools used by the UN to shelter civilians and even multistory residential buildings in downtown Gaza City that housed the backbone of the Strip’s media workers and middle class. According to the UN Office for the Coordination of Humanitarian Affairs (OCHA), the scale of damage from Operation Protective Edge was unprecedented since the beginning of the Israeli occupation of the West Bank and Gaza Strip in 1967.

Throughout the book, moments of humanity shine through the surreal fog of death and destruction. As Blumenthal sits with a family atop the rubble of their destroyed home, an elderly neighbor rushes into his dilapidated house and returns to the foreigner with grapes and ice-cold water. At every turn, the stark tragedy wrought by Israel’s destruction is presented simply, needing no embellishment. As Blumenthal wanders away from a press conference organized by the defiant al-Qassam resistance brigades—the military wing of Hamas—and “into the blacked-out streets of Shujaiya, which were lit only by the light of cellphones and piles of broken furniture set aflame, … a dozen young men stood around in silence, staring at the bonfire and the shadows that danced against the pockmarked walls of the homes they used to live in.” Blumenthal allows these young men and women of Gaza to speak.

Since 2007, Israel’s land, air and sea blockade has turned the 140 square mile strip, one of the most densely populated places on the planet, into what British Prime Minister David Cameron once referred to as an “open-air prison.” An internationally condemned act of collective punishment, Israel’s siege effectively seals the strip, denying its 1.8 million inhabitants of freedom of movement; causing constant water, cooking gas, fuel and electricity shortages; crippling the economy; and severely restricting the import of much-needed food, clothing, livestock and construction materials.

Throughout The 51 Day War, Blumenthal depicts the everyday impact of this siege upon Gazans: a doctor struggles in a vastly underequipped hospital to treat the dying and wounded; displaced persons line up for UN rations; a breakdancing troupe from Nusseirat Refugee Camp asks Blumenthal to run to Tel Aviv and bring them back turntables and a mixer; a student blogger yearns for the visa she needs to see the world and study abroad.

In his last book, Goliath: Life and Loathing in Greater Israel, Blumenthal took readers into the religious-nationalist underbelly of Israeli society, laying bare the web of expansionist politicians, fundamentalist religious leaders, xenophobic public figures and war-crazy citizens undergirding Israel’s seismic shift to the right. Though the bulk of The 51 Day War focuses on the people of Gaza, Blumenthal also shines his scathing spotlight, again, upon the violent forces sending Israeli society lurching towards fascism.

As the war unfolds, Blumenthal chronicles popular Israeli rappers working alongside far-right politicians to stir up nationalist sentiment and call for attacks on leftists and anti-war demonstrators. He writes of religious military commanders like Col. Ofer Winter who boast that Israel’s “warriors” are “protected by clouds … of divine honor” as they “shreded” Palestinian civilian homes and infrastructure. He also interviews Israeli leftists, caught off guard by the unprecedented surge of far-right street violence, who organize underground self-defense trainings to protect themselves.

While opinion polls showed Israeli citizens strongly backed the assault on Gaza—some actually dragging lawnchairs up to hilltops to watch and cheer on the bombardment of Palestinian homes in Gaza—hundreds of thousands of people took to the streets across the world to demand an end to Israel’s attack. In Chicago, home to perhaps the largest population of Palestinian immigrants in the country, thousands of people flooded the streets of downtown multiple times a week for massive demonstrations led by a coalition of Palestinian, Arab and Muslim groups. In a slew of direct actions throughout the city, Jewish and anti-war groups (including Jewish Voice for Peace-Chicago, where I work) disrupted pro-Israel fundraisers and rallies, occupied the corporate headquarters of war profiteer Boeing and more.

Such sentiment shows that while Israeli civil society may be sliding ever further to the right, Israel has become more and more isolated internationally—a trend likely to accelerate after the recent re-election of Prime Minister Benjamin Netanyahu alongside perhaps the most right-wing coalition in the country’s history.

Today, Gaza’s poverty rate remains at 70%, its unemployment rate has risen to 44%—the highest in the world, and much higher for youth aged 20 to 24—and its infrastructure remains severely damaged, with donor countries failing to deliver $5.4 billion in promised rebuilding aid. As facts on the ground worsen for Palestinians, the global Boycott, Divestment and Sanctions (BDS) movement against the Israeli occupation continues to gain momentum.

First called for by Palestinian civil society organizations in 2005 and modeled after the 1980s global boycott movement that helped end apartheid in South Africa, the BDS movement has in recent months caused multinational corporations profiting from Israel’s occupation to lose billions in lucrative contracts, led the push for the labeling of settlement products entering the EU, compelled celebrity artists like Lauryn Hill to cancel concerts in Israel, and more.

In America—the country, as Blumenthal repeatedly reminds his readers, that replenished Israel’s weapons stocks during Operation Protective Edge, and just approved another massive $1.9 billion arms sale to Israel—advocacy groups closely aligned with the Israeli government are pushing national and state legislation designed to fight the BDS movement and scrambling to stamp out a groundswell of support for BDS on college campuses. In the past year alone, a record 15 universities have adopted resolutions demanding that college funds divest from Israel, while on countless more campuses, chapters of Students for Justice in Palestine (SJP) and Jewish Voice for Peace (JVP) have educated thousands of students about Israel’s occupation and the call for BDS.

In the pages of The 51 Day War, Blumenthal shows that, in the hearts and minds of everyday Gazans, the Palestinian liberation movement is alive and well, animated by values common to anti-colonial struggles throughout history—values like sumud (steadfastness), fidaa (sacrifice/redemption), and ebaa (stubbornness in the face of power). His reporting makes clear that in Gaza—where a six-year-old child has already lived through three Israeli bombardments—the situation is bleak, but the resistance is strong.

Ben Lorber is Campus Coordinator for Jewish Voice for Peace.