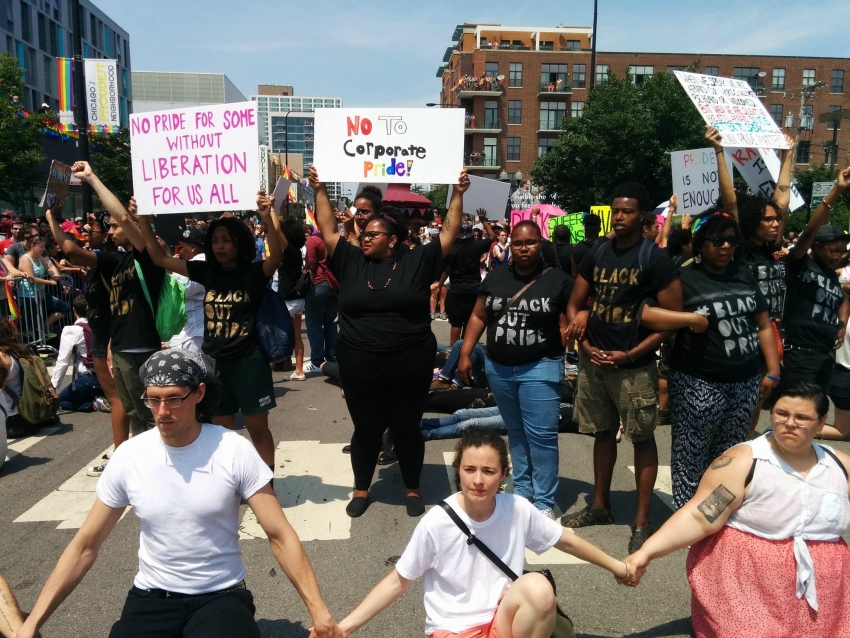 “We tried to make it clear that we’re not looking to transform Pride, but have the larger LGBT community, mostly gay and lesbian cisgender white folks, understand what it means to invest in communities of color that are trans and queer.”

The members who organized the protest were interested in developing an action based on the history of pride starting off as a riot and ending in front of the women’s detention center in solidarity with some of the liberation fighters during that time period. We wanted to call attention to the history.

On June 28, a group of black queer and trans community organizers, activists, artists and allies halted Chicago’s gay pride parade for about 15 minutes with an action called #BlackOutPride. The day after the parade and the action, I spoke with NIC Kay, one of the organizers of #BlackOutPride, about why they felt it was important to disrupt the Pride Parade, how to shift the focus of the LGBT community and the meaning of celebration.

What are the origins of #BlackOutPride? What inspired it and how did that lead to organizing the action?

The members who organized the protest were interested in developing an action based on the history of pride starting off as a riot and ending in front of the women’s detention center in solidarity with some of the liberation fighters during that time period. We wanted to call attention to the history. From there, we developed our collective statement as well as what we would do during Chicago Pride.

The location of the protest was very intentional, right in the heart of “Boystown” in the Lakeview neighborhood at Addison and Halsted, the intersection of Center on Halsted (an LGBT community center), the police station and Whole Foods. I think a lot of people both inside and outside of Chicago, both straight people and many gay and lesbian folks, see that area as the safest or one of the safest places in the city for queer and trans people.

Can you talk about how we can move beyond this idea that there’s only this one place in the city where all queer people are supposed to go? How do we build a whole city that is welcoming?

During our conversations, we talked about the implications of having Boystown be the gay neighborhood, this homogenous space where all LGBT folks feel comfortable. What are the traps of saying such things when we know about the policing of young queer and trans black folks in Boystown, at the Center on Halsted, in the neighborhood where the Broadway Youth Center was located, the experience of going to town halls to make sure BYC could have a home at Wellington Church. I used to live right in that area, and experienced firsthand the Take Back Boystown protest when I moved to Chicago in 2011, and the work that they were doing that was blatantly racist and transphobic. [Editor's note: You can read more about that battle here.] Those things are what we tried to center when we were thinking about what our demands were.

We tried to make it clear that we’re not looking to transform Pride, but have the larger LGBT community, mostly gay and lesbian cisgender white folks, understand what it means to invest in communities of color that are trans and queer. That would of course extend beyond Boystown due to the geographic makeup racially of the city. We know that most of the people who are being served in the neighborhood at these institutions don’t live in the neighborhood. They are experiencing homelessness or traveling long distances to receive services at Howard Brown Health Center or BYC or COH.

Why do you think a lot of those resources are centrally located in one place?

Think about what it’s like for business. If you can concentrate gay people going to a specific neighborhood—where the parade route is, where the organizations are housed, where the clubs are—it’s fueling commerce in that neighborhood. If you have all these gay businesses in one location, that’s a destination not only for people in Chicago, but for people throughout the Midwest. I think it all has to do with commerce and wanting to concentrate dollars in one area.

One thing you mentioned was trying to target gay and lesbian cisgender people to draw their attention to supporting queer and trans black folks. Do you think that there is a way to make members of the gay and lesbian community wake up?

It has to happen. Liberation and change is about making it happen. That’s the work of the organizers.

We were specifically calling out folks, but this is also to let other black queer and trans folks know that there are people out there that feel the same way and are doing the work and willing to do the work. That is what’s important to center, the conversation is not always and shouldn’t be centered in whiteness. This is about black queer trans folks who know that we have the power to collectively organize and create change and visibility. We don’t need to always have a large organization recognize us.

Can you describe the action in your own words? What occurred when you stopped the parade?

We were in the parade. Then we got to the intersection and had a chant. We created a formation. We had folks who did a die-in, other folks who created two circles around the die-in. Some who had posters, others who were just holding hands in the outer circle. I was in the middle speaking the statement and we did that in a “mic check.” After we read the statement, we continued to cheer and then the police arrived.

How did people respond to what you were saying and doing?

I think people were excited. People are excited at Pride for any type of performance. People were chanting with us in the beginning. After four or five minutes they realized it wasn’t the type of performative action they thought. It was in line with what was happening with other contingents in Pride and some people were confused and showed some opposition but for the most part, the message was relayed.

How did it feel for you on a personal level to halt and stop the Pride Parade?

It felt like I was coming full circle. I’ve been participating in Pride marches and Pride activities since I was 15. I was part of the Gay-Straight Alliance at my high school. It was a whole different experience for me then. As someone who wasn’t even out of the closet, I was an ally. It felt really great to be surrounded by people that I’ve known and built with in Chicago for the last four years. Without community, I would not have come this far to be able to do this sort of action.

There were a range of organizers and activists from various organizations in Chicago like Dyke March, Project Fierce, Black and Pink and We Charge Genocide. How did that group come together?

From reaching out to people and seeing who was down to do something. We didn’t have any model really. I started planning after a friend of mine who’s a Brown Boi did an action in Boston. That was somewhat of an influence, but we just kind of reached out to friends and people that we knew and started to build a contingent of folks who were interested in participating and doing a direct action.

Looking at the demands, they are both specific to Chicago and not specific to Chicago at all. They mention a lot of things like stop and frisk, ending policing, reopening schools and getting access to mental healthcare that are pretty broad and applicable to communities across the country. The demands seem like a vision for the future. How do you see the demands—what should people do with them going forward?

A vision and a launching pad for future conversation, action and organizing. When you talk about stop and frisk, when people talk about school closings and mental health clinics, those are separate conversations. These are all of our issues. These are things that we wanted to center because they are LGBT issues.

Do you think there is room for celebration that is inherently political or that also involves the type of action that you did at the parade?

My question similar to “Why Boystown?” is “What are we celebrating?” At 15, I was celebrating an awakening. At 16 or 17, I was celebrating being open about my relationship. At 17 or 18, I was going to Dyke March and exploring what it meant to occupy a queer space, learning about queer theory and politics. Those are celebrations for me. That’s how I embodied my pride.

I understand that everyone is at a different step in their journey. Those straight couples, what are they celebrating? Are they celebrating as allies? I’m not here to rain on anybody’s parade, but I think there’s room within celebrations to always remember the struggle. There is room for both, to celebrate where we have come from but to center the urgent issues.

How do you celebrate? What do you think is worth celebrating or what would you like to be able to celebrate in the future?

I think that’s a hard question. It’s a really tough time in our country right now to be a black queer person. I think it’s always a tough time to be a black queer person in this country. Celebration is tough but I definitely felt celebratory with the folks that organized the action, recognizing the amount of work and sacrifice and energy that went into doing something that felt really dangerous and impossible at times.

It would be great to celebrate an end to stop and frisk, a commitment to ending policing of trans and queer youth and the actual investment in the future of trans and queer black youth in Chicago through job placement, the building of a shelter, protection against workplace discrimination. All those things would be amazing and great things to celebrate.

Even though I think a lot of people would see #BlackOutPride through the lens of an action or a protest, I think it was a celebration too, an affirmation of what and who really matters.

A celebration of resistance, of continued fight. Definitely.

H. Melt is a transqueer poet and artist and the author of SIRvival in the Second City: Transqueer Chicago Poems. They live in Chicago.