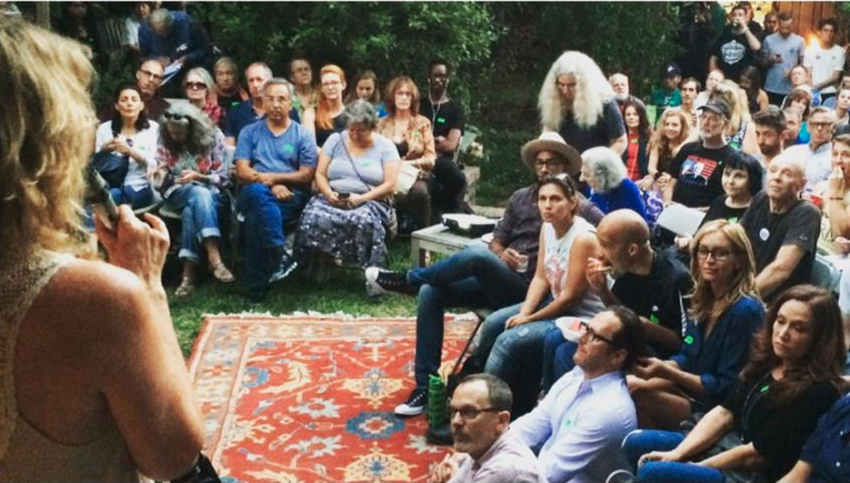 Attendees at parties across Iowa say that Bernie is “the guy we need right now.”

“I just really like Bernie Sanders because he says what he thinks. He’s been consistent. It’s his belief. It’s not about him wanting to be president.”

IOWA CITY, IOWA—More than 100,000 supporters of insurgent presidential candidate Bernie Sanders attended 3,500 house parties in all 50 states Wednesday night, according to campaign organizers, to hear the socialist candidate renew his call for a “political revolution” and ask them to join his campaign as active volunteers.

Punctuating each point and policy proposal with the activist phrase “enough is enough,” Sanders railed against “the billionaire class” and “major corporations who make billions in profits and, in some cases, pay nothing in federal taxes.”

Sanders also attacked “institutionalized racism” and said we should be sending kids to college, not to jail.

“Enough is enough. We are tired. We are tired of seeing black women yanked out of a car, thrown to the ground, assaulted, put in handcuffs and then sent to jail. And die three days later, in the case of Sandra Bland. For what crime?” Sanders said. “And we are seeing that all over the country. Enough is enough. We have got to combat institutionalized racism in America.”

At least 25 house parties were held in Iowa, the state with the first party caucus in the nation, including four in liberal Johnson County, a powerhouse in state Democratic politics. Forty people turned out to one house party on the east side of Iowa City, just two blocks from the local area high school, while more than two dozen attended a similar event downtown at the Iowa City Public Library. Thirty people attended a Sanders campaign event in the nearby town of North Liberty.

Julie Casella is a stay-at-home mother with two children, and her husband Paul is an adjunct professor at the University of Iowa medical school. She organized a potluck house party at her home and set out several televisions and computer monitors so her guests could watch Sanders’ speech from the living room, kitchen or front porch while snacking on food, drinking beer and socializing.

“I just really like Bernie Sanders because he says what he thinks,” Casella said. “He’s been consistent. It’s his belief. It’s not about him wanting to be president.”

“I’ve never done this before,” Casella continued. “I’ve never tried to host a house party. The last time I got really involved was George Bush’s second election and I wanted him to lose so badly. I always caucus, I always vote, sometimes I give a donation. But this is the first time I’ve ever felt like I really want to work hard for this.”

At the Iowa City Public Library, attendee after attendee expressed similar motivations. Although many were college students too young to have ever voted or worked for a political candidate before, many middle-aged professors, professionals and elderly retirees said the Sanders campaign inspires them to get involved in politics for the first time.

“I’ve never worked on a campaign before, but I saw Bernie and I liked what I saw,” said Darlene Placke, who brought her daughter Kate with her to the campaign organizing event at the Iowa City Public Library. Kate admitted she didn’t know anything about Bernie but was excited to learn more about him.

“I’ve been wild about Bernie for some time,” said Jim Bradley of Iowa City. “I just love his message. He’s so timely. He’s the guy we need right now.”

A University of Iowa nursing professor stood up to say about Bernie, “This man is not a politician. He is a real human being.”

Trey Abel, a young man who helped organized a campaign event in nearby North Liberty also said this is the first time he has ever taken an active interest in the political process.

“I’m so attracted to Bernie and his platform and everything he’s doing,” Abel said. “I started doing calls for the campaign in Iowa City three or four weeks ago. We’re bringing in our own laptops and cell phones to the office. We called registered Democrats and Bernie supporters and asked them to become volunteers.”

It’s difficult to determine if Wednesday’s events actually succeeded in helping Sanders to organize his followers and turn them into dedicated volunteers like Abel. More than 100,000 people gave his campaign their names and email addresses when they registered online to attend one of 3,500 house parties across the country. In Iowa City and North Liberty at least, the actual turnout closely mirrored the projected RSVP numbers, according to organizers.

At the Iowa City Public Library, everybody who walked through the door filled out a sign-in sheet, so the Sanders campaign could record more information about people such as their mailing address, telephone number and what kinds of volunteer activities they are willing to do. Everyone received a “commit to caucus” card.

But the format and agenda at each house party varied widely from event to event and not all of the volunteer organizers followed the script provided by the Sanders campaign. Some house parties were very informal and did not include serious discussion about organizing. At some places, sign-in sheets and other campaign materials were not widely distributed. House parties held halfway across the state in Ames, Iowa also had similar issues, according to people present at the events.

“No president, not Bernie Sanders or anybody else, can do it all,” Sanders said during his livestreamed address. “The powers that be—that is corporate America, Wall Street, insurance companies, the drug companies, the military industrial complex—these guys are enormously powerful. They’ve got the money, they’ve got the power, but we have the people.”

“Our job now is to turn this energy into a political organization, to figure out how we knock on doors, how we make telephone calls, how we just get out there and get the word out there to our neighbors that now is the time, not for old-time, establishment politics, but for a political revolution that can transform America.”