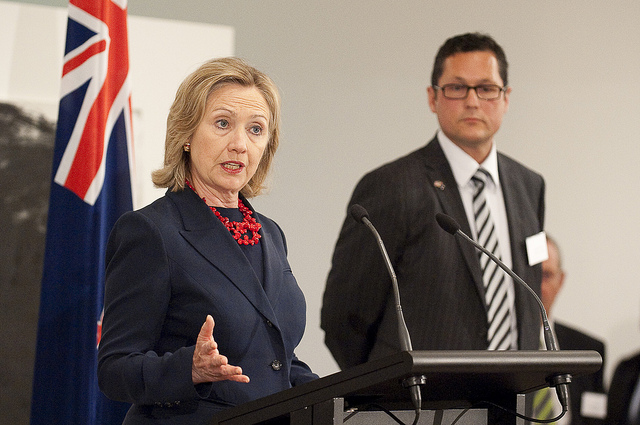 Is Clinton putting up a front to gain votes from the middle class? (US Embassy / Flickr)

Suddenly, Hillary Clinton Is a Critic of the TPP

After years of support for the trade deal, Clinton has seemingly backed off, as part of her newfound populism.

In June, CBS News reported that "a senior administration official told CBS News Correspondent Julianna Goldman that Clinton was one of the biggest backers of TPP."

In her quest for the Democratic presidential nomination, Hillary Clinton has lately promoted herself as a populist defender of the middle class. To that end, she attempted to distance herself last week from a controversial 12-nation trade deal known as the Trans-Pacific Partnership, which would set the rules of commerce for roughly 40 percent of the world's economy.

As with similar business-backed trade pacts, labor unions, environmental groups and public health organizations are warning that the deal could result in job losses, reduced environmental standards, higher prices for medicine and more power for corporations looking to overturn public interest laws. And so, in her quest for Democratic primary votes, Clinton is suddenly trying to cast herself as a critic of the initiative.

“I did not work on TPP,” she said after a meeting with leaders of labor unions who oppose the pact. “I advocated for a multinational trade agreement that would 'be the gold standard.' But that was the responsibility of the United States Trade Representative.”

The trouble, of course, is that Clinton's declaration does not square with the facts.

CNN has reported that during her tenure as U.S. secretary of state, Clinton publicly promoted the pact 45 separate times. At a congressional hearing in 2011, Clinton told lawmakers that “with respect to the TPP, although the State Department does not have the lead on this—it is the United States Trade Representative—we work closely with the USTR.” Additionally, secret State Department cables published by the website WikiLeaks show that her agency—including her top aides—were deeply involved in the diplomatic deliberations over the trade deal.

In a November 2009 cable, the U.S. embassy in Tokyo detailed TPP discussions between Japanese government officials and Robert Hormats, a former Goldman Sachs executive who was then serving as Clinton's undersecretary of state. In a December 2009 cable, State Department officials in Hanoi reported that the U.S. Ambassador “hosted a dinner on December 21 for Trans-Pacific Partnership (TPP) Agreement country representatives.” The cable thanked the Clinton-run State Department for providing “regular updates” that “have been key to helping us answer the many TPP-related inquiries we receive.”

The involvement of the Clinton-led State Department in the TPP is hardly surprising: In June, CBS News reported that “a senior administration official told CBS News Correspondent Julianna Goldman that Clinton was one of the biggest backers of TPP.” In a Bloomberg News interview that same month, President Obama's National Security Adviser Susan Rice disputed the idea that Clinton was not involved in the TPP.

“She was integrally involved in all of the major initiatives of the first term of the administration,” said Rice, who served as U.S. Ambassador to the United Nations when Clinton was Secretary of State. “She was instrumental in formulating and implementing the rebalance to Asia, of which the Trans-Pacific Partnership is a part.”

Considering all the evidence, Clinton nonetheless pretending she had nothing to do with TPP is clearly a strategic calculation: She is betting that few voters will notice the gap between her rhetoric and her own record. It is certainly a cynical tactic. Time will tell if it is a politically shrewd one.