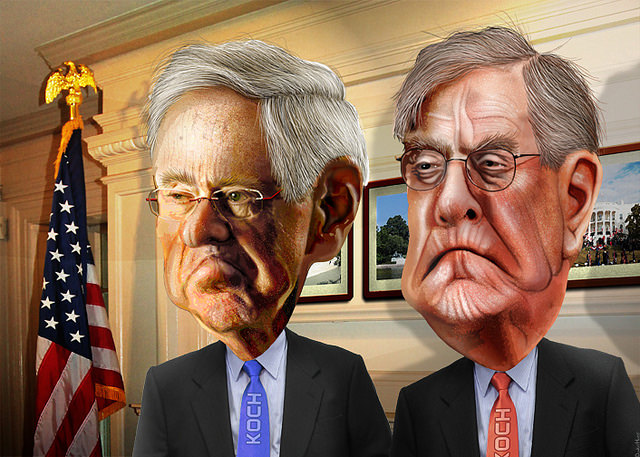 Charles Koch argued for an end to preferential treatment for corporations—but did he mean it?

As Big Business has used campaign cash to secure more control over politics, elected officials have been approving more and more taxpayer subsidies for corporations.

Earlier this month, billionaire Charles Koch had a surprising message: In a speech to his fellow conservatives, he said politicians must end taxpayer-funded subsidies and preferential treatment for corporations.

Why is this surprising? Because the demand came from an industrialist whose company and corporate subsidiaries have raked in tens of millions of dollars worth of such subsidies.

“Where I believe we need to start in reforming welfare is eliminating welfare for the wealthy,” said Koch, who, along with his brother David, is among the biggest financiers of conservative political causes. “This means stopping the subsidies, mandates and preferences for business that enrich the haves at the expense of the have nots.”

Yet, in the last 15 years, Koch's firm Koch Industries and its subsidiaries have secured government subsidies worth more than $166 million, according to data compiled by the watchdog group Good Jobs First. The group says since 1990, Koch-owned properties have received 191 separate subsidies worth a total of $195 million.

Koch Industries and its subsidiaries, which are a privately held, are involved in everything from oil refining to manufacturing to high finance. In 2012, Charles Koch issued a similar jeremiad against government-sponsored subsidies for corporations. In a Wall Street Journal op-ed, he said, “We are on dangerous terrain when government picks winners and losers in the economy by subsidizing favored products and industries.” In his essay, he specifically derided tax credits—yet even after the op-ed, Koch-owned properties accepted more than $77 million worth of such taxpayer-funded preferences from governments, according to Good Jobs First.

Among the biggest subsidies received by Koch-owned companies was a $62 million Louisiana property tax abatement for Georgia Pacific—a paper and chemical conglomerate that was acquired by Koch Industries in 2005. Georgia Pacific also received a separate $11 million tax credit from Louisiana in 2014 to upgrade its facilities.

Since 2007, Good Jobs First says Koch Industries itself has received more than $20 million in subsidies through an Oklahoma program designed to incentivize investment and job creation. Oklahoma’s government website lists more than $28 million in such tax credits to the firm and its subsidiaries.

Koch, it should be noted, is not like other top executives of major corporations. His company is not publicly traded—it is privately held, with most of the company owned by him and his brother, David. That means the Kochs could reject subsidies and not have to justify the move to hordes of shareholders. Instead, though, they have accepted the government support, even as they fund conservative campaigns that deride the influence of government on the economy.

Of course, Koch’s speech certainly did identify a growing trend in America. As Big Business has used campaign cash to secure more control over politics, elected officials have been approving more and more taxpayer subsidies for corporations. Conservative opposition to those expenditures will no doubt be key to reining them in.

However, it is difficult to believe that the head of a company that has benefited from so much taxpayer support is really going to use his political power to end the largesse. In other words: The message may be compelling, but the messenger is not particularly credible.