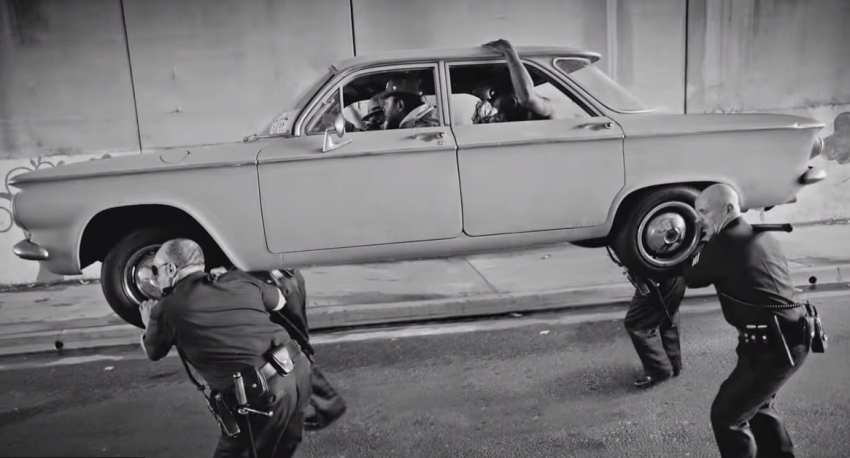 A scene from the music video for Kendrick Lamar's "Alright." (YouTube)

The New Anthems of Resistance: Hip-Hop and Black Lives Matter

Black Lives Matter and hip-hop have taken the omnipresent tensions around racism in America and put them into the center of mainstream consciousness.

It would be too simplistic to say that songs like these are somehow “radicalizing” mainstream music. But the past year has shown that a movement can permeate ideas into a mainstream that is usually able to keep such ideas at bay.

It’s been a year since the death of Michael Brown, a year since the rebellion in Ferguson, a year since the Black Lives Matter movement began to shift the conversation in just about every avenue of American life. That shift can be seen in politics (from #BowDownBernie to Donald Trump’s threats to beat up protesters) and economics (the Black Youth Project’s embrace of the Fight for 15). It can also be seen, perhaps most obviously, in our culture—and in music, in particular.

Not surprisingly, hip-hop has led the way—not just through a predictable barrage of tweets by musicians and artists, but a sustained, meaningful wave of creativity and outspokenness engaging with a bold, sometimes chaotic movement.

The examples are many: Run the Jewels’ second album, recorded months before the verdict letting Officer Darren Wilson off the hook, which tapped into the profound anxieties of “post-racial” segregation, surveillance and police brutality. We’ve seen R&B artist D’Angelo’s return from a 15-year hiatus with an album some are comparing to Marvin Gaye’s What’s Going On. Kendrick Lamar’s W.E.B. Du Boisian To Pimp a Butterfly is being hailed as a masterpiece and is even being taught in college courses. Jay-Z and Beyonce paid bail for several demonstrators arrested during the Baltimore rebellion. It is no coincidence that performers like Killer Mike and Talib Kweli have emerged as de facto artistic spokespeople for this moment.

Those with an awareness of hip-hop history might answer such observations by saying that there are always artists in rap and R&B seeking to distill the spirit of the time down to something poignant and fresh, if one simply looks beyond “what the radio is playing.” These commentators are, of course, correct. But the context of a movement in the streets has put all of this on a different level.

Black Lives Matter has taken the ever-present tensions percolating from centuries of American racism and put them into the center of mainstream consciousness. The same has happened at several key points in modern music’s history (with hip-hop, in particular). Popular artists make themselves meaningful again—not to the directives of a profit-hungry music industry but to the logic of a movement. That movement, in turn, has engaged with music in a conversation.

First came an incident of heavy policing at the Black Lives Matter conference in Cleveland. When police bore down on attendees in response to an alleged incident of public intoxication with pepper spray and handcuffs, demonstrators chanted back the refrain of the most recent single from Lamar’s To Pimp a Butterfly: “We gon’ be alright! We gon’ be alright!”

The incident was more than a simple act of defiance. “Alright” is something of a keystone on To Pimp, bringing together the album’s tropes—the pain, inner turmoil and rage of American racism—and inverting them into a declaration of uncertain hope. The surreal video follows suit: Lamar and his friends in a car carried by LAPD officers in place of wheels, the artist balancing atop a streetlight before being shot down by a surly cop.

The performance of the single at the BET Awards pushed further in that same direction, with Lamar performing in front of Jumbotron footage of a waving American flag while stomping on a graffitoed police car. On Fox News, Geraldo Rivera was characteristically quick to raise the alarm, claiming that the performance “incited violence.” Lamar replied, “How can you take a song that's about hope and turn it into hatred?”

What happened in Cleveland brought Rivera’s worst fears to life. Here was a contingent of militant Africans and African Americans, as confident as they were angry, declaring defiantly against state repression that they will be “alright”—surely enough to make any Fox News anchor squirm in their seat.

From music finding resonance in the streets, we go the next stage in the call-and-response: the noise of the streets being echoed back in music. Last week, Janelle Monae, Jidenna and other members of Monae’s Wondaland Records collective released their surprise single “Hell You Talmbout.” The day before, they had performed the song a capella at a march against police brutality in Philadelphia (the Wondaland roster was in Philly for a concert to promote their Eephus EP, released on Friday).

Wondaland artists perform “Hell You Talmbout” at a concert in Philadelphia on August 12, after the march against police brutality.

The collective has performed similar concerts and at demonstrations since, signaling that the song has been composed with the clear intent that it be used, literally, as a rallying cry.

The recorded song isn’t too far from the live version; the only instrumentation comes in the form of marching band drums, which is rather uncharacteristic of an artist known for complex and creative production. The only chorus is the refrain of the title; the only lyrics for the verses are the names of those murdered by the police or vigilantes— Walter Scott, Freddie Gray, Aiyana Jones, Amadou Diallo, Sandra Bland, Miriam Carey, Eric Garner, Michael Brown, Trayvon Martin, Emmett Till and others—followed by the command “say her name” or “say his name.” The song’s inclusion of female victims is significant: A common criticism of the movement against police brutality is that the treatment of black women doesn’t as often provoke the same response as that against black men.

Given the song’s simplicity, it may sound tedious, but it is anything but. The past year has seen the command of “say her/his name” become a regular fixture at protests and vigils against police killings of African Americans. Anyone who has seen it done with purpose can attest to its emotive power. Monae, Jidenna and Wondaland understood that the target audience for this song would know what they were hearing.

And the inclusion of the sharply rhythmic marching drums is deliberate. Versions performed in different cities have included different names, from Ramarley Graham to slain Black Panther leader Fred Hampton. This isn’t just an encapsulation of the aesthetics of protest, but a skillful channeling of the rage undergirding them—which, despite the song’s seven-minute length, never dies away.

In a statement released on Instragram, Monae declared:

This song is a vessel. It carries the unbearable anguish of millions. We recorded it to channel the pain, fear, and trauma caused by the ongoing slaughter of our brothers and sisters. We recorded it to challenge the indifference, disregard, and negligence of all who remain quiet about this issue. Silence is our enemy. Sound is our weapon. They say a question lives forever until it gets the answer it deserves. … Won't you say their names?

The song has, similar to Lamar’s “Alright,” put certain media gatekeepers on edge. The decision of “Today Show” producers to cut to commercial right as Monae launched into a speech against police brutality on Friday’s telecast is sadly predictable. So is the network’s excuse that “the performance was not intentionally cut off.”

In both of these songs and their real-world echoes, there is a strong sense of convergence, a reminder that what happens in the underground doesn’t always stay underground and that the mainstream isn’t impenetrable. It would be too simplistic to say that songs like these are somehow “radicalizing” mainstream music. But the past year has shown that a movement can permeate ideas into a mainstream that is usually able to keep such ideas at bay. Times of struggle make collision inevitable. Nowhere is that perhaps more true than the United States, which seems to specialize in deferring dreams bound to explode.

Alexander Billet is a writer, poet and cultural critic living in Chicago. He is a founding editor at Red Wedge magazine and has written for The Nation, Jacobin, New Politics and other outlets. Follow him on Twitter: @UbuPamplemousse.