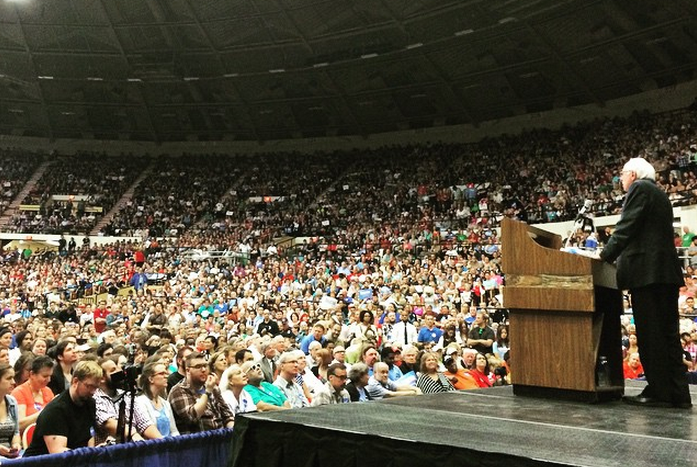 Mainstream commentators are insistent that the outpouring of enthusiasm for Sanders’ progressive vision is meaningless.

If Sanders’ rallies, like Obama’s, are signs of a growing movement, why do the Post’s columnists focus their articles on doubting the political potential of that movement and hailing the inevitability of Hillary Clinton?

With each city Democratic presidential candidate Bernie Sanders visits, the number of supporters he draws to his rallies keeps growing. Since June 1, Sanders has spoken to 100,000 people across seven events.

In Phoenix, Arizona, on July 18, he drew 11,000 people, setting a new record for 2016 presidential candidates. His record continued in Seattle with 15,000 supporters, and then in Portland with 28,000 supporters. In Los Angeles on August 10, Sanders drew about 27,500 supporters, according to the Sanders campaign.

But for Washington Post columnist Philip Bump, those numbers “don’t matter much.”

Another Post columnist, Chris Cillizza, also attributes Sanders’ crowds to the cities being majority liberal, writing, “Portland is a known den of progressivism where President Obama drew massive crowds during his 2008 campaign.”

So far, Clinton’s largest rally had 5,500 supporters. Bump claims Clinton’s lack of large crowds is intentional; she prefers “neatly tailored group[s] of a few thousand” in “a space meant to display an audience that size for the cameras” as part of a strategy to distance herself from the image of being an unapproachable juggernaut. Bump writes:

Could Clinton fill an arena in Los Angeles if she wanted to? Of course she could. Unquestionably. … There are unions in Los Angeles that can fill a stadium on a week’s notice. This is not as big a task as it looks.

Sanders, on the other hand, has filled tens of thousands of seats without leveraging unions to artificially fill seats. Regardless, attracting large crowds has indeed been a big task for Republican candidates.

To be fair, Cillizza and Bump recognize Sanders’ ability to draw crowds with grassroots campaigning and enthusiasm. Cillizza writes, “But, crowds are at some level an indicator of organic energy—it is after all how it became clear in 2006 and 2007 that something major was happening with Obama.” Bump writes, “Now, I’ll grant that [filling an arena] is probably easier for Sanders—that he has more energy behind him.”

But these statements always come with a catch. Cillizza framed Sanders’ success in attracting supporters mainly as an irritant to Clinton’s campaign — not because he could win, since “Clinton isn’t in the danger of losing the Democratic nomination that she was in 2008.” Rather, visible enthusiasm for Sanders could create a dangerous “perceived lack of passion” for Clinton:

Republican base voters will be fired up beyond belief to take back the White House—and vote against Clinton—next November. She has to find ways to create that passion for herself within the Democratic base.

A more recent op-ed by Cillizza rejected the entire premise that Clinton could be overtaken, saying, “It’s too late for Democrats to start rethinking Clinton’s 2016 viability.” He writes Clinton has more political favor than Biden, Al Gore or “your ideal rich-person-with-no-record-and-a-fresh-faced-appeal.” The only mention of Sanders is in the second-to-last paragraph as “the liberal alternative.”

Bump noted that supporters at the LA rally—which he rounded up to 28,000—are only a tiny fraction of the 2.5 million of LA residents who voted for Obama in 2012, and therefore do not show us how many people will vote for Sanders in 2016. This metric is meaningless; of course the number of people who vote for a presidential nominee is going to be larger than the number of people who attend a rally more than a year before the election.

Cillizza compared Sanders’ 28,000 turnout in Portland in August to Obama’s 75,000 in the same city in May 2008—even though Obama’s rally, the largest of his 2008 campaign, occurred during the height of primary voting in Oregon, whereas Sanders’ was approximately nine months in advance of the primary.

A fairer comparison would hold Sanders’ rally in LA up to Obama’s LA rally in February 2007, which was about one-third as large. Despite some corporate media naysaying, Obama’s LA rally was highlighted by the Post as a noteworthy achievement, since 9,000 “is a larger turnout than President Bush usually gets and certainly more than Obama’s rivals in the 2008 campaign are pulling in.”

If Sanders’ rallies, like Obama’s, are signs of a growing movement, why do the Post’s columnists focus their articles on doubting the political potential of that movement and hailing the inevitability of Hillary Clinton?

Michael Tkaczevski is a student at Ithaca College and an editorial intern at Fairness & Accuracy In Reporting (FAIR).