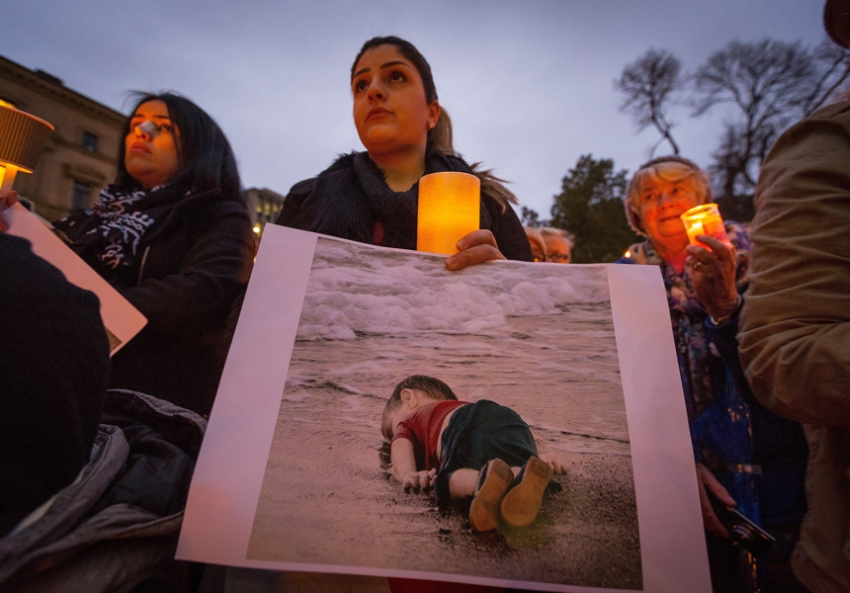 Holding a photo of a drowned Syrian child, protesters call on the Australian government to increase its refugee quota (Chris Hopkins / Getty Images)

The Surefire Formula for Doing Good?

The altruists profiled in Strangers Drowning have made huge personal sacrifices for others. But what should we make of their extremely individualistic approach?

MacFarquhar does not invite us to worship her subjects so much as to understand them and our own (often hostile) reactions toward them.

If you walked past a shallow pond and saw a neighbor's child drowning, would you stop to pull her out? Of course you would; if you didn't, you'd be some kind of monster. But what if it was a choice between a stranger's child and your own? Or what if the child was dying farther away, in a distant country, made visible to you only by the evening news? Does that make your moral obligation different?

We're all familiar with these thought experiments, designed to shock us out of our willful blindness to the suffering of others, or our tendency to spend money on ourselves that we might otherwise give to charity. But for some people, this casual blindness is impossible. The “do-gooders” profiled in Larissa MacFarquhar's new book, Strangers Drowning: Grappling with Impossible Idealism, Drastic Choices, and the Overpowering Urge to Help, ignore the boundaries we usually draw between family and strangers, those to whom we owe care and those whose suffering we can overlook. To MacFarquhar's subjects, there is always a child drowning, just out of reach.

These do-gooders are mostly not famous, but they are extremists: those whose youthful zeal to change the world has continued into adulthood. Among them are the Indian founder of a remote leper colony, a Japanese Buddhist priest who tries to talk his suicidal countrymen back from the brink, and people who have driven themselves to extreme poverty in order to donate as much money as possible to charity. For Aaron Pitkin, an animal rights activist, doing good became a “numbers game”: He devoted his life to improving the lot of factory-farmed chickens, calculating that in terms of lives saved and suffering eased, no other cause have a greater impact.

Some are religious and some aren't, but their stories tend to read like the lives of saints—recognizably human but driven by a mystical certainty that can be, well, mystifying.

Yet MacFarquhar does not invite us to worship her subjects so much as to understand them and our own (often hostile) reactions toward them. Her profiles are interspersed with a history and analysis of how we have come to pity and pathologize do-gooders, following the lead of economists, psychologists, historians, philosophers and other experts who are deeply suspicious of selflessnewss. Do-gooders fare particularly badly in literature, from Charles Dickens to Jonathan Franzen, where they are generally portrayed as ridiculous, pompous and useless. In the secular, capitalist West, she suggests, we can stomach moral extremism only in wartime, when a man who abandons his family in the name of an abstract cause is a hero instead of a deadbeat. For MacFarquhar's do-gooders, however, “it is always wartime.”

Many of the subjects encountered utilitarian philosopher Peter Singer's 1971 essay, “Famine, Affluence, and Morality,” at an impressionable age, from whence the drowning child analogy comes. Singer used it to attack wealthy Westerners for spending money on themselves while foreign refugees starved; distance (and invisiblity) are no moral anesthetic. Inspired by this idea, one of MacFarquhar's subjects, Charles Gray, held himself to what he called his “World Equity Budget”—the world's total annual income, divided by its population—of a little over a thousand dollars a year. But for others, Singer's argument presdented a conundrum: Was it better to devote oneself to the low-paying, caring work of a nurse or a social worker, or to earn as much as possible and then donate the most money? And how could you be sure your money was doing as much good as it could?

In the past few years, the “effective altruism” movement has entered the fray to help nascent do-gooders make this decision by ranking charities according to how much good they do, measured by “quality-adjusted life years” saved per dollar. Not surprisingly, the movement has proved particularly popular with those in the earn-more, give-more camp, whom MacFarquhar identifies as mostly “well-educated young, white men of technological background and rational disposition.”

Yet for many of us, effective altruism's urge to assign a calcuable value to human life feels alien, and the scientific rationalism so beloved of tech-minded young, white men seems reductive at best. We are not rational, perhaps, when we prefer to donate to a cause in our neighborhood rather than to more urgent disaster relief overseas. But there's a value in community that most of MacFarquhar's do gooders seem, quite painfully, not to understand. Although many of them have partners, with whom they plunged at young ages into relationships dominated by debates about how to save the world, few are connected to a wider human group. They do not pursue political or collective solutions to the world's ills, but are weighed down by an almost unbearable sense of individual responsibility. In several cases, despite MacFarquhar's sympathetic storytelling, that individualism starts to sound a lot like narcissism. Of those profiled, a pastor, a nurse and a Buddhist priest come closest to doing the type of good that doesn't merely save a life but tries to improve it, too, in its fullness. It's a complicated business that does not fit easily into a utilitarian schema, but it's what most of us know instictively to be true: Saving a life is just the beginning.