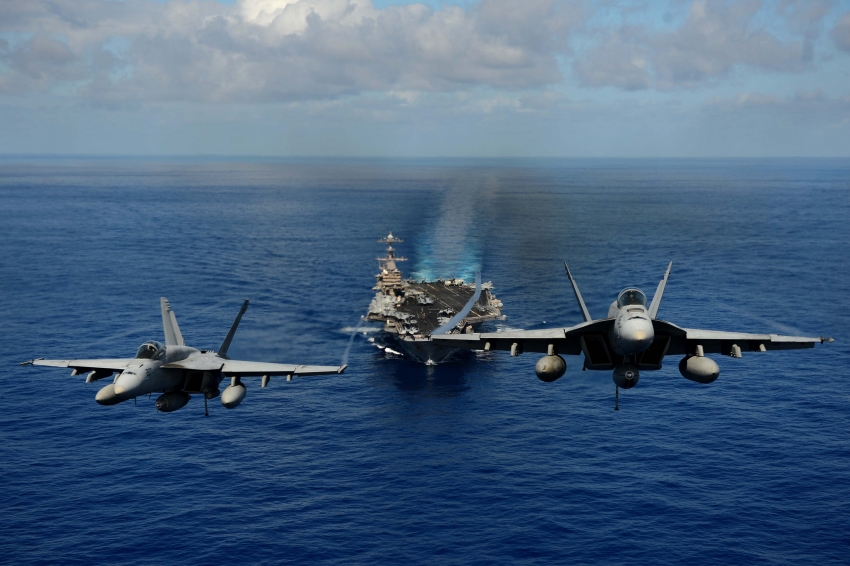 Reporter Helen Cooper won’t let innocent civilian deaths get in the way of a “good” story.

Trying to wring some melodrama out of the not-particularly-dangerous lives of U.S. bomber pilots, the New York Times' Helene Cooper starts off an article with an anecdote about two U.S. Navy jets taking off from an aircraft carrier on a bombing mission in Iraq:

In one of the fighter jets was Navy Lt. Michael Smallwood, 28, call sign Bones, and in the other was his friend and roommate, Navy Lt. Nick Smith, also 28, call sign Yip Yip.

For a minute or two that day in May, the Hornets were right next to each other in the sky, but then Lieutenant Smith’s plane had engine trouble and began to lose altitude. Over the radio, Lieutenant Smallwood could hear his friend turn around, try to land back on the carrier and then eject into the Persian Gulf. The $60 million Hornet crashed into the sea.

Lieutenant Smallwood found himself fighting to keep his mind off the fate of his friend, but his orders were to continue climbing and fly on to Iraq.

Midway through the article–whose main point, according to the headline, is that “For U.S. Pilots, the Real War on ISIS Is a Far Cry From Top Gun“—Cooper teases readers again:

As Lieutenant Smallwood’s plane flew toward Iraq in May after his friend had ejected from his own jet, he could hear from the chatter on the radio that a recovery effort was underway. But Lieutenant Smallwood knew better than to clog up the frequency asking if Lieutenant Smith and his weapons officer on the plane had been found alive.

Five more hours to go. Arriving in the skies over Iraq, Lieutenant Smallwood’s Super Hornet connected with a refueling tanker to get gas, then continued with the task at hand. But whenever there was a lull in the flight, “all I could think about was my roommate and his W.S.O.,” Lieutenant Smallwood said, using the military term for weapons officer.

At the end of the article, Cooper finally reveals the information withheld from her initial anecdote: Spoiler alert! The pilot who ejected was fine. She ends with a quote from his roommate:

“But I still had to run down to the room to see for myself,” Lieutenant Smallwood recalled. “First thing I did was hug him.”

This cozy ending to Cooper’s drawn-out tale was not altogether surprising, given the low casualty rate for US military personnel in what the Pentagon refers to as Operation Inherent Resolve: The Navy has lost only two people in a year of combat, both in non-combat related injuries, one of which involved falling off a balcony while on leave.

Cooper does her best nevertheless to make the reader empathize with the risks faced by bomber pilots, despite a former flyer’s admission that “if you stay above 10,000 feet, you’re not going to be hit.” Though the mechanical difficulties faced by Yip Yip dominate the story, Cooper asserts that “engine troubles are not the only risk at 25,000 feet.” What else is there? Well, there’s acceleration: “The F/A-18s today require more G-forces than the planes of the Top Gun era, and pilots today pull nine Gs instead of four and five Gs”—so pilots have to make sure they are “not dehydrated or hungover from drinking and crooning the Righteous Brothers to Kelly McGillis at a bar the night before.”

For comparison purposes, riders on the Shock Wave roller coaster at Six Flags Over Texas experience six Gs—placing the amusement park-goers somewhere between Maverick and Bones on the toughness scale.

There’s one other risk “beyond that” that Cooper presents the bomber pilots as facing, though they’re not actually the ones facing it:

Despite the precautions the pilots say they take, there are civilian casualties from airstrikes, although the number is in deep dispute. Officials with United States Central Command, which oversees American military operations in the Middle East, recently said that they had received reports of 31 episodes involving civilian casualties since the airstrikes began, and had dismissed 17 as not credible, with six still under investigation. One report, investigated for more than six months, led Centcom officials to conclude that two children were probably killed by a coalition airstrike.

That paragraph is followed by a one-sentence paragraph: “Monitoring groups say the command’s figures are a gross understatement.” But that’s the last we hear from these monitoring groups; instead Cooper goes back to a Navy officer, who assures us that “in the war against the Islamic State, bombs hit their intended targets almost all of the time,” because “world opinion swings very violently against you when you start killing the wrong people.”

Cooper also tells us that flyers “spend a lot of their time in the air watching patterns of civilian life, to determine whether a movement on a road just outside of Ramadi is a truck full of Islamic State fighters or a pickup with civilians,” and that “they very often return to the Roosevelt [aircraft carrier] with all of their bombs still strapped to the planes.”

If she had talked to some of those monitoring groups, readers would have gotten a very different picture. The monitoring project Airwars, for example, says that at least 575 civilians have been killed in well-reported incidents connected to confirmed U.S. or U.S.-allied airstrikes from August 2014 through August 2015.  With nearly 5,000 airstrikes conducted by the US and its allies in the first 11 months of the bombing campaign, this suggests that for every 10 air raids Yip Yip and Bones carry out, roughly one civilian is killed.

Cooper is right about one thing: That sure doesn’t sound like Top Gun.