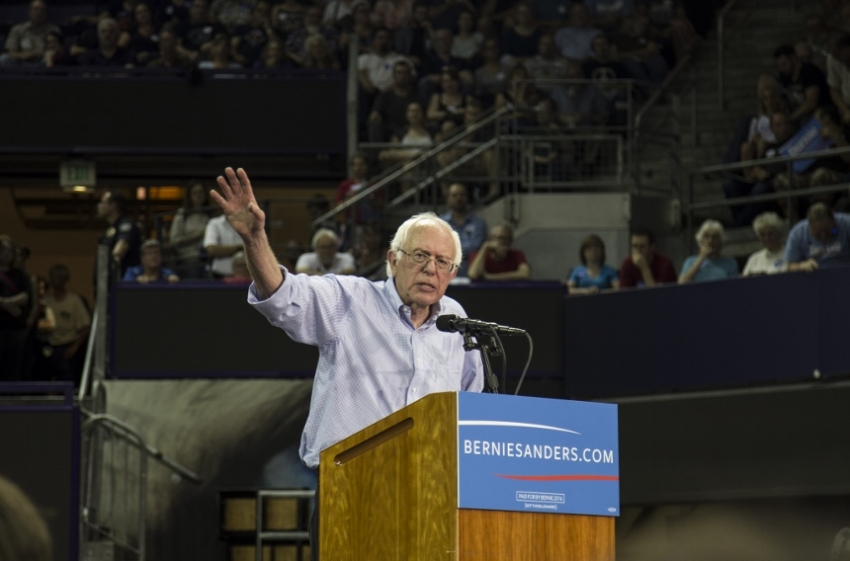 The democratic socialist is taking a stand by running a clean campaign, and it’s already making a big impact on the race for president.

If Clinton ran an attack ad, she risked coming off as desperate or a bully. But by not running attack ads, she would essentially render herself unable to combat any surge in the polls by Sanders.

When Bernie Sanders’ Senior Advisor Tad Devine announced in August that the Democratic presidential candidate would not be running any attack ads against Hillary Clinton, many saw the move as simply being consistent with his previous campaign strategies and his progressive platform. Sanders has said he “hates and detests these 30-second negative ads” and has never run one. He sees the ads as part of what’s broken with American politics, and his disavowal of them fits with his electoral reform policies, which condemn super PACs and the buying and sensationalizing of U.S. elections.

But Sanders’ refusal to produce attack ads has proven to be more than a matter of simple moral consistency. His pledge represented a shrewd political decision by the Sanders campaign—a decision that has now paid off.

Electoral reform is central to Sanders’ platform for president. By swearing off attack ads against his opponents and cash from super PACs which often fund such ads, he has attempted to show that unlike his opponents, he can actually carry out the ideals he speaks so often about. In fact, shortly after Bernie’s announcement, his campaign sent a cease-and-desist letter to a PAC supporting him, which was first formed by Congressional lobbyist Cary Lee Peterson to encourage the Vermont Senator to run.

Meanwhile, Clinton, who earned a reputation for cutting attack ads during her 2008 presidential bid against Obama, is running on a similarly progressive electoral reform platform—while also gladly accepting more than $20 million in support from Priorities USA Action, her Super PAC. At the same time as her own website criticizes the Supreme Court’s Citizen United case, saying it “helped unleash hundreds of millions of dollars of secret, unaccountable money into U.S. elections that is drowning out the voices of ordinary Americans and distorting our democracy,” Hillary is seeking some $2 billion, much of it PAC money, for her campaign.

However, the political depth of Bernie’s refusal to run negative attack ads has proven far more important than revealing contrasts between the two candidates. This decision actually forced Hillary’s campaign into an incredibly difficult position. If she ran an attack ad, she risked coming off as desperate or a bully. But by not running attack ads, she would essentially render herself unable to combat any surge in the polls by Sanders.

Until recently, Clinton had held off on running negative publicity. But Sanders’ self-identification as a socialist must have been too hard for her campaign to resist attacking.

On September 14, the Huffington Post received an email from one of Clinton’s Super PACs that intimated Sanders would begin diplomatic ties with terrorists and linked him to the socialist former President of Venezuela, Hugo Chavez. In its report on the email, HuffPost concluded it was unclear whether the message would be disseminated to anyone else. If it was, however, “the attack would be in the vein of what Sen. Claire McCaskill (D-Mo.) said about Sanders earlier this year—that he's unelectable, since he's a self-identified democratic socialist.”

Sanders’ campaign was quick to react to this attack, sending out an email that illustrated the difference between his political strategy and that of the “billionaire class.” “Let’s send a powerful message that we have had ENOUGH of the billionaire class buying elections,” the email read. “If we stand together to fight back against these ugly attacks, we can ensure this election is about who has the best ideas, and not who has the biggest donors.”

Within two days, the Sanders campaign had raised $1.2 million in grassroots contributions. According to the executive director of ActBlue, the progressive fundraising website Bernie uses to receive online donations, at one point during the blitz, they were receiving 180 contributions per minute.

And on September 20, less than one week after the Super PAC attack first went live, Hillary promised CBS News’ John Dickerson on “Face the Nation” that she has “no interest” in running attack ads on Bernie. “I want this to be about ideas and about policies,” she said. “I know Bernie. I respect his enthusiastic and intense advocacy of his ideas. That's what I want this campaign to be about, and I hope people who support me respect that.”

In fact, this was one of the first times since his announcement that Sanders was explicitly mentioned by Clinton. In the past, she has avoided saying his name and declined to comment on the threat his campaign poses to her success in the primaries.

Sanders’ commitment to refrain from producing attack ads paid off, allowing him to illustrate a vital contrast between himself and Clinton—and raising his campaign more than a million dollars in donations in the process. Furthermore, his consistency forced Clinton to backtrack on an important issue under public scrutiny, reinforcing the notion that she is simply a politician willing to do whatever it takes to win while Sanders operates out of an ironclad commitment his progressive ideals.

Such commitment is a big part of why Sanders’ campaign has proven so refreshing for so many American voters, and for millennials in particular. This generation has largely been disillusioned with U.S. politics: Fewer millennials vote, join political parties or consider politics one of their interests than in previous generations. But Sanders’ campaign has reinvigorated a large proportion of the country’s newest voters: some 59 percent of college-aged Democrats support Sanders, compared to Clinton’s 18 percent, a Chegg Media Center poll reports. Almost half of the students surveyed find Hillary “unfavorable.”

Sanders has managed to pull Clinton to the left on yet another issue. As he continues to surge in the polls, Clinton is responding by moving left on issues as diverse as Black Lives Matter, the Keystone XL pipeline, Wall Street and electoral reform and even the Fight for 15. As long as Sanders continues to maintain his progressive stances on a number of other issues, his principled campaigning will likely continue to translate into tangible political gains.

By the end of the primaries, regardless of who wins, the candidate will either be a true progressive dedicated to combatting inequality, fighting systemic racism, and running a clean campaign, or someone forced to champion a number of progressive causes that she likely would have barely considered otherwise. And, unlike Hillary Clinton, that’s what matters to Bernie Sanders—that someone, anyone, gets the job done.