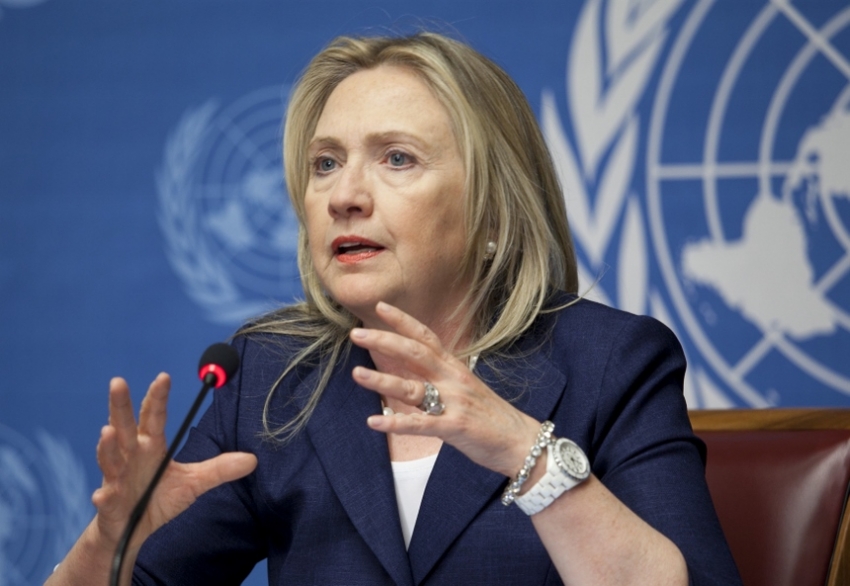 Hillary Clinton was urged by her unofficial advisors to involve the US in Libya's 2011 civil war. (United States Mission Geneva / Flickr)

Responding to an email from Slaughter about the Egyptian Revolution, the former Secretary of State told her she would include her points in her upcoming interviews, concluding: “Thx so much. Pls keep the ideas coming!” Meanwhile, when Blumenthal suggested establishing a no-fly zone over Libya, Clinton forwarded it on to her Director of Policy Planning Jacob Sullivan within 10 minutes, asking him, “What do you think of this idea?”

The latest release of emails from Hillary Clinton’s private server has prompted numerous stories about the former Secretary of State’s battle with an intransigent White House phone operator, her preparations for an appearance on Ellen DeGeneres' TV show and the fact that even the United States’ top diplomat gets sent the same kind of scam emails that the rest of us do. What hasn't been reported is how the current Democratic frontrunner was urged by her unofficial advisers to take up the interventionist stance she eventually adopted toward the Libyan civil war during her time in cabinet—with disastrous results.

Back in 2011, the United States, along with a number of other Western powers, intervened in an increasingly violent civil war in Libya, first by imposing a no-fly zone and then by commencing a bombing campaign that forced dictator Muammar Gaddafi to flee the capital. Clinton was reportedly instrumental in not just convincing President Obama to approve the U.S.’s involvement, but in keeping the entire fractious coalition of Western powers together.

After Gaddafi was toppled, Clinton was quick to declare the operation a success, flashing a peace sign in Tripoli and declaring it “Libya’s victory.” She publicly praised the United States’ “smart power,” while privately—as previously released emails revealed—her advisers urged her to take credit for the operation’s supposed success.

But Clinton’s enthusiasm for intervention in Libya didn’t emerge out of a vacuum, as the most recently released emails show. She was encouraged to back military action early on by two key figures: former White House official and friend Sidney Blumenthal and former State Department official and columnist Anne-Marie Slaughter.

Blumenthal’s role as Clinton’s confidante is well established at this point, as previous State Department’s email releases have shown. Hundreds of those emails involved advice from Blumenthal on everything from domestic and foreign politics to ideas for speeches.

But Slaughter’s role is less well known. Serving under Clinton as the State Department’s Director of Policy Planning from 2009 to February 2011, Slaughter stepped down and moved into a professorship at Princeton and, later, a role as President and CEO of New America, a think tank. Slaughter remained a consultant to the State Department’s Public Policy Bureau, however, and continued sending emails directly to Clinton about a variety of topics—including the events in Libya.

Slaughter was one of the loudest voices publicly calling for U.S. involvement in the North African state, and she continued this line in her private correspondence with Clinton. In one email dated February 23, 2011, in reference to images of brutality that were emerging from Libya, Slaughter insisted that “with this level of violence, force can only be met by force.”

In fact, as she saw it, intervening in Libya was vital to America’s global standing, as it would “change the image of the United States overnight, particularly with the millions of young people who are watching.” As historical examples to bolster her case, Slaughter picked three that would have been particularly meaningful for Clinton, having occurred during her husband's presidency: NATO intervention in response to the ethnic cleansing of Muslims in Bosnia, the NATO bombing campaign against Serb forces in Kosovo and, most significantly, the United States' and other countries' failure to act to prevent genocide in Rwanda in 1994.

And the entire world would see, as they saw in Bosnia, NATO forces using force to save Muslims. Remember Rwanda. Even a small deployment could have stopped the killing. … Remember Kosovo.

Slaughter continued to send emails that threw an overwhelmingly positive light on potential Libyan intervention. In another email three days after her initial one, she urged Clinton to issue a public statement of support for Libyan protesters, which she believed would help “impress the young people across the Middle East.” In March, she sent Clinton a copy of an op-ed she had written that was due to appear in the next day’s New York Times, which called for a no-fly zone and touted intervention as “a chance to support a new beginning in the Muslim world.” She also sent Clinton potential talking points on U.S. policy toward Libya for the Sunday talk shows, and advised her to frame the conflict as a “popular revolt” instead of a “civil war.”

Blumenthal also encouraged military action against Libya, passing along an article in February which reported former UK Foreign Secretary David Owen calling for a no-fly zone over the country. Later, in June, he wrote to Clinton about the deteriorating situation in Syria, assuring her that “the most important event that could alter the Syrian equation would be the fall of Gaddafi, providing an example of a successful rebellion.” He attached an article that he had helped develop, which argued the eventual fall of Gaddafi could serve as a new model for removing Middle Eastern dictators: “limited but targeted military support from the West combined with an identifiable rebellion.”

Given that the period from February to March marked Clinton’s transformation form a skeptic to a “strong advocate” for U.S. intervention in Libya, and that the weeks after that saw NATO’s original mission morph into one of regime change, the existence of these messages is significant.

Slaughter and Blumenthal weren’t just yelling into the breeze—Clinton clearly valued their advice. Responding to an email from Slaughter about the Egyptian Revolution, the former Secretary of State told her she would include her points in her upcoming interviews, concluding: “Thx so much. Pls keep the ideas coming!” Meanwhile, when Blumenthal suggested establishing a no-fly zone over Libya, Clinton forwarded it on to her Director of Policy Planning Jacob Sullivan within 10 minutes, asking him, “What do you think of this idea?”

In reality, the outcome of Western intervention in Libya was far more disastrous than Slaughter and Blumenthal predicted. Clinton may have deemed it a “victory” in 2011, but toppling a government is the first, and often easiest, step when it comes to regime change; the trouble, as the United States has found in Afghanistan, Iraq and elsewhere, is everything that comes after.

Today, Libya is an anarchic failed state split between literally hundreds of armed factions and two rival governments, all vying to win control over the country. Food and electricity is scarce while crime and armed conflict is rife. Schools and universities are closed, becoming shelters for the displaced. And with no police to uphold the law, people have turned to armed militias.

It’s tempting to wonder whether things might have been different had Clinton had another, less interventionist set of informal advisors. There was no shortage of voices at the time warning that involvement in Libya, particularly expanding the original mission to focus on toppling Gaddafi, would lead to exactly the state of affairs the country now faces.

The Ottawa Citizen recently revealed that the Canadian military, part of the NATO campaign in Libya, had produced a report four days before bombing commenced in 2011 stating that removing Gaddafi would create a long-term civil war. Four days before that, Retired General Wesley Clark, an “old friend” of Clinton’s, wrote an op-ed in the Washington Post with a similar warning. Even though Clinton cited the article in her memoir, she seems not to have heeded its message.

By contrast, Slaughter's advice to Clinton was dismissive of such concerns:

People will say that we will then get enmeshed in a civil war, that we cannot go into another Muslim country, that Gaddafi is well armed, there will be a million reasons NOT to act. But all our talk about global responsibility and leadership, not to mention respect for universal values, is completely empty if we stand by and watch this happen with no response but sanctions.

By all available accounts, Clinton single-mindedly and aggressively went on to pursue the goal of Western military intervention in Libya. By July, her chief of staff was celebrating that the State Department had managed to feed the New York Times “more ammo” for an op-ed urging the United States to stay the course in Libya. And although Clinton downplayed her role in pushing for intervention in her 2014 book Hard Choices (by which time the country had long plunged into chaos and claiming credit for Gaddafi’s ouster would have been a liability rather than a benefit), her own director of policy planning wrote a timeline of her “leadership on Libya” in August 2011, demonstrating Clinton’s “leadership/ownership/stewardship of this country's Libya policy from start to finish.” The timeline begins two days after Slaughter's first email advocating intervention.

As the Clinton 2016 campaign rolls on, the public will hear much about her foreign policy experience. But it’s not just Clinton herself the public should be keeping an eye on—they should also be assessing the judgment of those who have her ear.