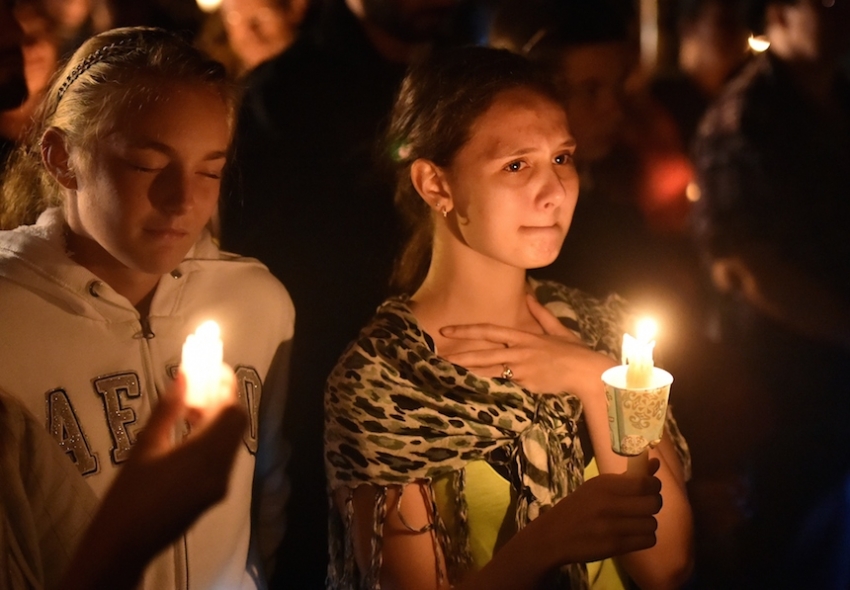 On the night of October 1, hundreds came together in Roseburg, Oregon to mourn the victims of the Umpqua Community College shooting. (Josh Edelson/AFP/Getty Images)

If We Can’t Ban Guns, Can We Make Them Safer?

As mass shootings mount, some activists believe they’ve found a smart way around the political gridlock.

So far, DNSIB has convinced 76 jurisdictions—from municipalities to state governments—to pledge only to buy guns from manufacturers that seriously invest in smart gun technology and sell only to legitimate, above-ground dealers with a strong record of legal sales.

Today, shots rang out at Northern Arizona University and Texas Southern University. Thus far, two students have been reported dead and four others wounded. This is the 282nd day of 2015, and the Northern Arizona shooting was the 299th mass shooting of the year in the United States.

That means that, on average, a single assailant has shot four or more people more than once per day. This summer, these incidents filled the headlines, from the armed brawl in Waco, Texas, to the mass shootings in Charleston, N.C., Chattanooga, Tenn., and Lafayette, La. And the standard definition of mass shooting is a conservative one; the Texas Southern Univerity attack doesn’t count because there were two shooters and two victims. In total, there are more than 83,500 nonfatal firearm injuries per year and more than 30,000 firearm deaths, according to the most recent CDC numbers, from 2013.

Most can agree that at the very least, what’s needed is to ensure guns stay out of the hands of potential criminals or terrorists.

It is in this context that President Obama has all but begged Congress to pass gun control laws. Following the Umpqua shooting, he addressed the nation wearily: “Somehow this has become routine. The reporting is routine. My response here at this podium ends up being routine. The conversation in the aftermath of it. We've become numb to this.” But with Congress controlled by Republicans, and even some Democrats under the sway of the NRA’s $3.36 million-dollar lobby, no legislation has been proposed since a gun control package was shot down in 2013.

Gun-violence prevention group Do Not Stand Idly By (DNSIB) has come up with a plan to bypass Congress altogether. Part of the Metro Industrial Areas Foundation (Metro-IAF), a nationwide multi-faith network of community organizations, DNSIB seeks to use the government’s massive purchasing power to encourage the gun industry to join the campaign against gun violence.

Rabbi Joel Mosbacher, who heads the Beth Haverim Shir Shalom Synagogue in Mahwah, N.J., started the campaign in the wake of the Newtown, Conn., school shooting. Mosbacher is a member of Metro-IAF and has taken part in many of their campaigns. He lost his father to gun violence during a 1999 petty robbery. “We were trying to think, as we always do in community organizing, who else has the power to affect change on gun violence?” he explains.

Mosbacher says that he and his associates soon realized they “were leaving out a pretty big player. And that was gun manufacturers. That they can play their constructive part in reducing gun violence.”

Public officials—such as those in charge of local police departments—can pledge to purchase weapons only from manufacturers who follow certain safety precautions. President Obama could mandate tomorrow that the military follow this model.

DNSIB sees two main ways that the gun industry can improve gun safety. The first is to make the firearms themselves more secure. Smart gun technology can ensure that weapons are fired only by their legal owners. Some of these advanced weapons use behavioral biometrics—how you hold the weapon, the strength of your grip, the positioning of your fingers—to uniquely identify you. Less advanced smart guns are coupled with a ring or bracelet and based on proximity, so they can only be fired when near their corresponding item.

The second goal focuses on the infrastructure through which criminals obtain their guns. Almost 60 percent of guns used in crime in the United States are sold by the same 1.2 percent of dealers, according to a Bureau of Alcohol, Tobacco, Firearms and Explosives report from 2000—“1,020 of the approximately 83,200 licensed retail dealers and pawnbrokers” in the country. This is the most recently available data because shortly after this report was released, Congress—with the support of the Bush Administration and the NRA—passed a law preventing the release of most gun-tracing data to researchers, the media and the public.

These 1,020 dealers are often breaking the law in order to exploit a market of customers who can’t pass a legally-mandated background check—whether because of prior criminal history or mental illness. If gun manufacturers didn’t sell to these dealers, they could more than halve the number of guns reaching criminals.

So far, DNSIB has convinced 76 jurisdictions—from municipalities to state governments—to pledge only to buy guns from manufacturers that seriously invest in smart gun technology and sell only to legitimate, above-ground dealers with a strong record of legal sales. Most notably, Governor Dannel Malloy of Connecticut has signed on.

Mosbacher now hopes to recruit the four largest gun buyers in the country–the federal government and the cities of Chicago, Los Angeles and New York. He says DNSIB activists are planning to meet with Los Angeles Mayor Eric Garcetti in the near future.

As more and more officials sign onto the DNSIB plan, Mosbacher predicts gun manufacturers will react in two different ways. Some will begin a “race to the bottom,” responding to the DNSIB initiative with threats of boycott, relocation or electoral payback while refusing to comply with new standards. Other manufacturers will begin a “race to the top,” eager to tap this market of more selective governments and safety-oriented private buyers.

To encourage the latter strategy, DNSIB and Mosbacher hosted a smart gun show in May. Attended by five smart gun designers, 80 faith leaders and representatives from nine police departments, the event in New Rochelle, N.Y., might have been the first gun show to display smart guns. According to Mosbacher, the event went very well.

Mosbacher sees smart guns as a solution to a large number of gun violence issues. In addition to making stolen or secondhand guns useless to criminals, they can prevent teenage gun suicides and the tragedies caused by young children firing their parents’ weapons.

Still, smart guns face strong opposition from the guns rights activist lobby—especially the NRA. The chief cause for this opposition is the existence of so-called mandate laws. New Jersey’s law is the most well-known. It states that from the moment a smart gun goes on the market anywhere in the country, all gun stores in the state must convert to selling only smart guns within three years. It was passed when smart guns seemed right around the corner by advocates of the safer technology. However, the law has only served to galvanize opposition to smart guns.

Meanwhile, Do Not Stand Idly By itself has faced very little criticism. The most common, says Rabbi Seth Limmer, a member since its founding, is “There’s no way you could do this because the gun manufacturers will never change and you’ll never get it past the NRA.”

But DNSIB has reason to be hopeful. When Mosbacher first started the campaign, Metro-IAF purchased a booth for DNSIB at Europe’s Enforce Tac gun show, an event which caters specifically to law enforcement. They were able to meet with the executives from two companies, SIG Sauer and Glock, to talk about accountability and gun violence.

Meanwhile, according to Mosbacher, when told about DNSIB’s program, then-CEO of SIG Sauer Ron Cohen said his responsibility was to make guns, not ensure the safety of the American public. (SIG Sauer did not respond to numerous requests for confirmation.) This reaction, the rabbi argues, was just as useful.

“A couple of weeks later we were meeting with Gov. Malloy’s staff in Connecticut,” he recalls. “When we told that story about SIG Sauer, all their eyebrows went up. They said, ‘We buy SIG Sauer for our state police.’ And we said, ‘Maybe it should matter next time you buy guns for your state police that SIG Sauer thinks it has no responsibility whatsoever to help keep Connecticut residents safer.’”

The next week, Malloy signed on to the campaign.