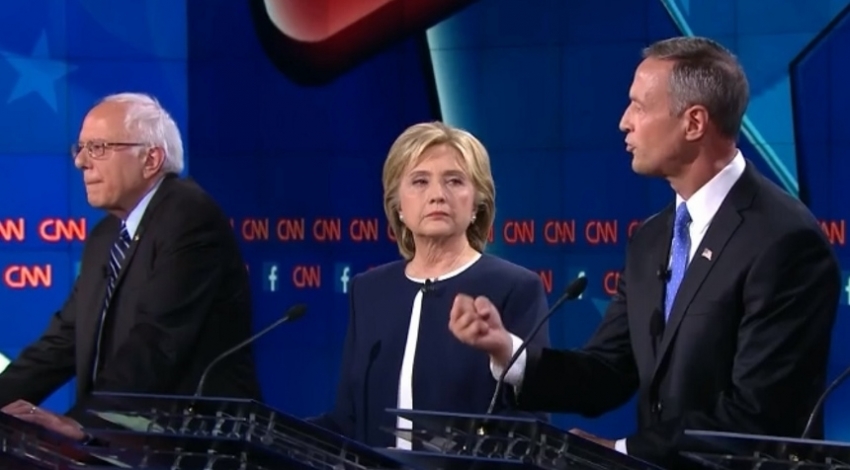 The debate was interesting for what wasn't talked about as much as what was. (CNN)

Israel, Afghanistan and Drones: What the Democrats Didn’t Talk About Last Night

The Democrats’ foreign policy discussions often took a hawkish line and avoided many of the most important issues that a future president will face.

This should have been a slam dunk for Sanders, who could have linked the end of the [Afghanistan] war to his proposed social spending at home—after all, the war has cost approximately $685 billion over its duration.

With inequality rampant, ordinary Americans struggling to make ends meet and the United States as a whole still attempting to drag itself back out of recession, it’s to be expected that foreign policy would not be as prominent a debate topic as it was during the 2003 and 2007 democratic debates. Still, last night’s debate was instructive on the subject—more because of what both the candidates and the moderators didn’t talk about than what they did.

The United States and Israel

Despite ongoing unrest in Israel and occupied Palestinian territories that has seen 29 Palestinians and seven Israelis killed over the last two weeks, as well as what some are calling the possible beginnings of a “third Intifada,” there was not a single question about U.S. policy toward Israel.

The clashes are driven in part by the fact that illegal Israeli settlements have continued to spread during the Obama administration, with the Israeli settler population growing by nearly 25 percent between 2009 and 2014, making a two-state solution closer and closer to becoming an impossibility. Yet the only time Israel was even mentioned was by Jim Webb, who slipped an adoring reference to Israel as “our greatest ally” in an answer to a question about Russia.

Given that U.S. support of Israel, which is the largest recipient of U.S. military aid in the world, is one of the chief sources of resentment toward the United States in the Middle East, it’s a topic worth discussing. After all, it’s this resentment that helps drive the terrorism that many of the candidates did talk about during the debate, and which Hillary Clinton and Martin O’Malley specifically deemed the United States’ “greatest national security threat.”

This silence might be related to the fact that there may not be much daylight between the two front-runners on this issue—Clinton is a major supporter of Israel, while many on the left see Bernie Sanders' relationship with Israel as uncomfortably cozy.

The war in Afghanistan

The U.S. war in Afghanistan is still going on. In fact, last week, the United States was responsible for the bombing of a Doctors Without Borders hospital there which killed 22 doctors, nurses and patients. At 14 years and counting, it’s currently the longest foreign war in the history of the United States. And while the White House would like you to think the war ended at the end of 2014, in reality, the military left nearly 10,000 troops in Afghanistan and continues to bomb the country.

You would not know any of this from last night’s debate, where Afghanistan was either used as a rhetorical crutch (Anderson Cooper: “tell an American soldier who is watching right now tonight in Afghanistan why you can be commander-in-chief”) or received unquestioned support (“I supported the war in Afghanistan,” said Sanders, disputing that he is a pacifist). The one time a discussion about the war was brought up, it was as a throwaway question inserted in the middle of Lincoln Chafee’s answer about how his administration would differ from Obama’s, meant as clarification. (To his credit, Chafee was clear that “We’ve got to stop these wars” and mentioned the bombing of the hospital.)

The U.S. war in Afghanistan, which may well go into its 16th year, surely warranted some discussion. Sanders attempted to differentiate himself from Clinton by opposing U.S. involvement in Syria, calling it “a quagmire in a quagmire”: “I will do everything that I can to make sure that the United States does not get involved in another quagmire like we did in Iraq,” he pledged. Yet Afghanistan is as much a quagmire as Iraq, a graveyard for imperial powers that last helped bring down the former Soviet Union.

Sanders’ silence on the issue is in stark contrast to his words of warning regarding Putin’s involvement in Syria, that he “is going to regret what he is doing” when he “gets bogged down” in the country. This should have been a slam dunk for Sanders, who could have linked the end of the war to his proposed social spending at home—after all, the war has cost approximately $685 billion over its duration. Compare this to Dennis Kucinich speaking at the September 25, 2003 Democratic debate:

I’m disappointed that my fellow colleagues here haven’t continued to make the connection between the rising deficit and the war in Iraq. … They’re talking about spending hundreds of billions of dollars for this war. And if you look at the maldistribution of wealth, it’s going to be accelerated by this war. … I think we have to reorder our priorities. It begins with getting out of Iraq and putting money again into health care, into education, into job creation.

Exchange “2003” for “2015,” and “Iraq” for “Afghanistan,” and this could sound like your run-of-the-mill Bernie Sanders stump speech. This was a missed opportunity.

Although the United States only has ground troops in Afghanistan and Iraq, and is nominally at war only in Afghanistan, the use of drones has meant that in reality it’s bombing at least four different predominantly Muslim countries. The strikes have killed more than 3,000 people at least, many of them civilians.

The expansion of the United States’ use of drones is one of the most significant developments of the Obama administration. While Democrats spent much of the 2003 and 2007 Democratic debates lambasting George Bush’s use of executive power and foreign entanglements, Obama’ drone program has far outpaced anything Bush ever did. It has also created a government assassination program based on dubious legal grounds with no Congressional oversight that has killed at least four U.S. citizens since 2009 with no due process.

Given that it’s a Democrat, not a Republican, in the White House that has presided over all this, it’s perhaps not surprising that many of the candidates would remain tight-lipped during the debate—aside from Lincoln Chafee, who, again, specifically denounced the use of drones. This was also a failure of the CNN moderators, who were focused on the latest foreign policy boogeyman of the day—Russia—at the expense of other issues.

What the candidates did talk about when it came to foreign policy often stuck to a hawkish line. O’Malley declared that a nuclear Iran, along with ISIS, was the United States’ greatest national security threat. Clinton argued for confronting Russia and defended the disastrous U.S. intervention in Libya she pushed as Secretary of State, while bragging that she had made enemies of “the Iranians.” Jim Webb, far and away the most aggressive of the five candidates, saw China as America’s next great threat, blamed the Iran deal for “bad body language” that spurred Russia to invade Syria and even joked about murdering a guy in Vietnam. The only candidate who consistently held an antiwar, anti-intervention line was Lincoln Chafee, who may well not make it through all of the debates, given his poll numbers.

“[T]here is such a difference between everything you’re hearing here on this stage, and what we hear from the Republicans,” Hillary Clinton said at one point last night. Yet if the Democratic candidates keep toeing this aggressive line on foreign policy, that will get less and less true. Compassion for ordinary people is what’s meant to set the Democrats apart from their Republican colleagues, at least according to their own campaign material—that should be as true for foreign policy as it is for anything else.