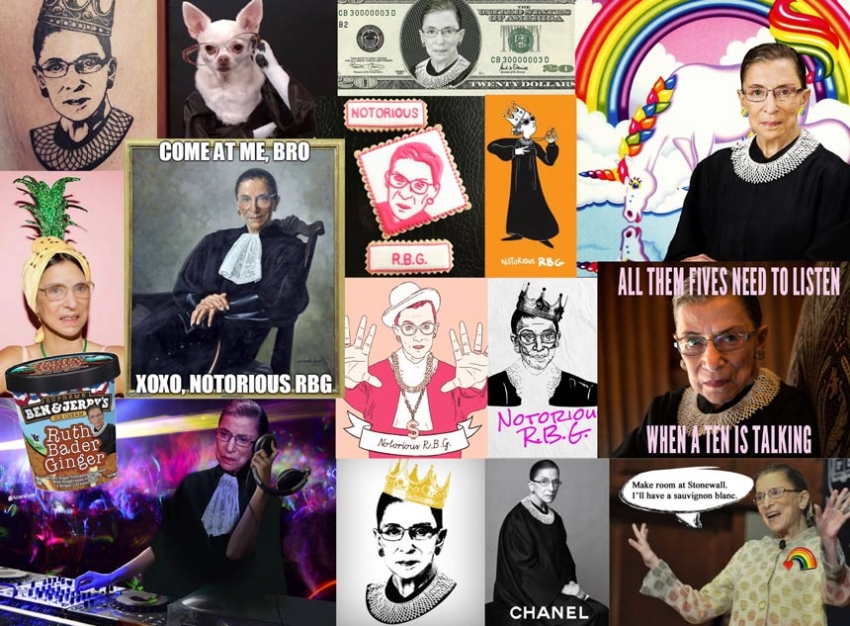 A collection of memes featuring Justice Ginsburg (via NotoriousRBG.Tumblr.com)

The psychology behind the ‘Notorious RBG’ phenomenon.

Ginsburg isn’t the first or the only female Supreme Court Justice, nor the only liberal justice, and she is far from the only justice ever to offer a memorable dissent. So how did she go from simple respect to cult status? How did a quiet 82-year-old opera fan become the face of feminist rage?

Supreme Court Justice Ruth Bader Ginsburg makes for a spectacularly unlikely Internet celebrity. She’s 82 years old, for one thing, born in 1933, two years before the Hoover Dam was completed and just 13 years after women were guaranteed the right to vote. She’s instantly recognizable— distinctive glasses, hair tightly pulled back, lace collar—but, unless voluminous black robes are your thing, she’s not easily described as “glamorous.” Nor is she very hip; her abiding musical passion is opera. (Her early 1990s exercise classes, she once noted, were set to “loud music, sounding quite awful to me.”) She lives for work, and her work is writing technical legal opinions in a style she describes as “bland.” Indeed, unlike famous feminist firebrands, Ruth Bader Ginsburg’s affect bears the marks of a time when women’s emotions and expression were even more strictly policed than they are now; she is quiet, polite, ladylike. She believes that being angry is a waste of time. Despite disagreeing with fellow Justice Antonin Scalia on pretty much every important question of our day, Ginsburg is friends with him.

And yet. The kids are really into Ruth Bader Ginsburg— aka Notorious RBG, a play on the name of rapper Notorious B.I.G., and the title of a popular Tumblr by Shana Knizhnik. Ginsburg has become a feminist and pop culture icon. A quick Internet search turns up pictures of her face Photoshopped onto Marvel’s Black Widow and Game of Thrones’ Khaleesi. T-shirts are sold, emblazoned with “You Can’t Handle the Ruth” and “Ruth Badass Ginsburg.” (One features a cartoon of Ginsburg flipping off the viewer, with the word “DISSENT” beneath it.) Planned Parenthood and the Human Rights Campaign have both used her work as a starting point for their social-media campaigns. Natalie Portman is slated to play her in the biopic and Kate McKinnon parodies her on SNL (catchphrase: “You just got Ginsburned”). This is relatively unprecedented for women in politics. By way of context, googling “Hillary Clinton memes” turns up an image of Hillary with the words “WHEN ARE YOU GOING TO TELL THE TRUTH ABOUT BENGHAZI? YOU DIRTY WHORE SLAG” typed over her face. It’s one of the nicer options.

Notorious RBG: The Life and Times of Ruth Bader Ginsburg is also the title of Knizhnik and Irin Carmon’s new biography of Ginsburg. It turns out that beneath the voluminous robe beats a heart of steel. RBG’s “toughness” is not purely mental: The woman has said she can function on one or two hours of sleep, survived cancer twice without missing work, and insisted on going to the gym when she had two broken ribs. She also, surprisingly, makes fashion statements: Each of those lace collars has a meaning. When she wears the “dissent collar,” watch out.

The book is light—visual and meme-inclusive, as befits its Tumblr origins— but, Carmon tells me, the Internet has taught us that “you don’t really have to choose between being substantive and having a lot of fun.”

And the substance is there. RBG’s most important briefs and opinions are excerpted at length and cleanly annotated. For example, the sentence “In addition to its reliance on a sex-based stereotype no less invidious than one racial or religious, the regulation invoked against petitioner operates as an unconstitutional infringement upon petitioner’s right to privacy in the conduct of her personal life and her right to free exercise of her religion” turns out to (a) forward the contentious idea that women can be treated as an oppressed class in the eyes of the law, and (b) say, “It’s not OK for your boss to fire you if you get pregnant.”

This, in part, is what has turned Ginsburg into an icon of dissent. The memes about her ferocity stem from the relatively few dissents she has issued: against the 2006 gutting of the Voting Rights Act, against the Hobby Lobby decision, against Citizens United. While it’s fun to imagine Ginsburg mowing down her enemies with targeted insults, the fact is these dissents are powerful precisely because Ginsburg is so cooperative and reserved. When the woman who has a rule against getting visibly angry sounds upset, “then you know that something is really wrong,” Carmon says. It’s not that she never gets angry. “She just thinks about the right time and place to show it publicly.”

This explains why Ruth Bader Ginsburg deserves your respect, but it doesn’t quite explain her Internet fandom. Ginsburg isn’t the first or the only female Supreme Court Justice, nor the only liberal justice, and she is far from the only justice ever to offer a memorable dissent. So how did she go from simple respect to cult status? How did a quiet 82-year-old opera fan become the face of feminist rage?

One answer, hinted at in Notorious RBG, is that Ginsburg’s story is, in many ways, the story of women in the 20th century. From an upbringing in which her mother told her never to get angry, to raising children while attending law school, to being outright asked by a professor why she was taking a spot away from a male student by being there (she told him it was so that she could be a more understanding wife to her lawyer husband—a lie), to having a feminist “click” moment while teaching young female students in the 1960s, to negotiating an egalitarian domestic relationship with her husband (he did the cooking—after tasting hers, the decision was inevitable), to earning a seat on the Supreme Court, every gain made by women in the 20th century has been played out in the gains made by Ruth Bader Ginsburg.

“People can see themselves in her,” Knizhnik tells me. “She has gone through struggles and she hasn’t always had things easy, and her work ethic and her stance on life is to always get back up.”

Ginsburg is not “just like us”; she is, obviously, extraordinary. That is not to say she is perfect. Her decision not to retire during the Obama administration has irked some progressives who believe it leaves the Court open to a far-right takeover if the Democrats don’t win the next election. (“Anybody who thinks that if I step down, Obama could appoint someone like me, they’re misguided,” she told Elle in 2014.) But she is a symbol of how far feminism has taken women in this century, and of the hope that it might take them further still.

There is also this: Whether or not she wanted to be, the Notorious RBG is now permanently associated with the act of dissent. For women and young people—both of whom tend to feel underrepresented in the political process—it is inspiring to see a woman in the nation’s highest court whose power comes from saying “no.” The iconography of the Notorious RBG speaks to the hunger for a woman who can talk back to power. Ruth Bader Ginsburg is the Woman Who Says No. And we need those women, badly, in part because it is so very hard, and thankless, and necessary, to say “no” ourselves.