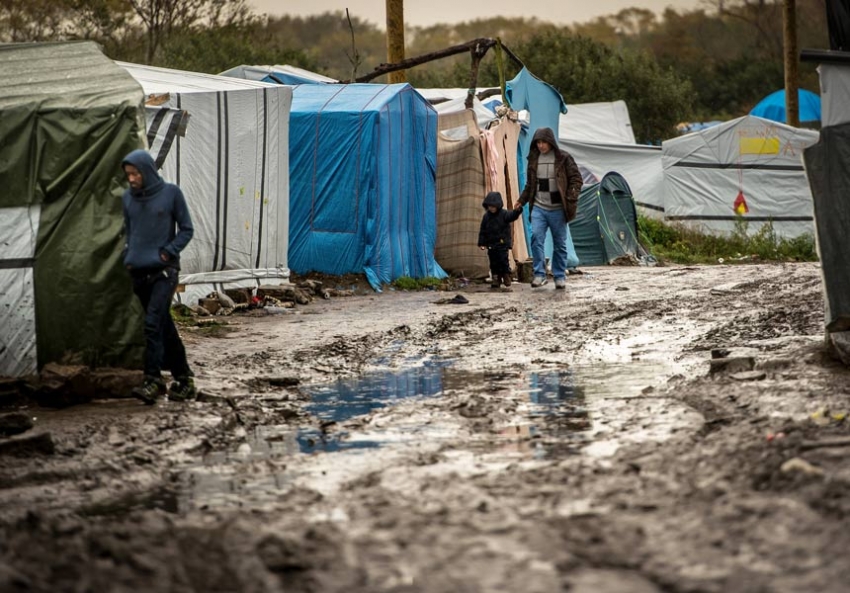 Refugees walk along a mudpath in the ‘New Jungle’ migrant camp in Calais, France. (MILLER/GETTY IMAGES)

The Barriers to Understanding the Refugee Crisis in Europe

It is another irony that it is Angela Merkel who deplores the unwillingness of other European countries to take their share of refugees—the German leader who reminds us that if the European Union fails to uphold human rights in this direst situation, it is nothing.

In 1944, on February 26, in the forests clinging to the steep sides of the Ardèche Gorge in southern France, a motorised column of German soldiers encountered members of the resistance. The confrontation resulted in the death of one German. Six days later, the SS returned to the tiny hamlet of Hameau des Crottes to avenge that death. They lined up 16 inhabitants—men, women and four teenagers—against a wall, shot them, and pillaged and burned the village. No local people ever returned to live in the hamlet, and the event was referred to thereafter as the petit Oradour ardèchois: a reference to the Nazis’ 1944 massacre of 600 civilians, shot in the legs and then burned to death, in Oradour-sur-Glane, a village near Limoges, which has been preserved to this day in its ghostly, ruined state.

I’m just back from an idyllic holiday in Hameau des Crottes, the site of the “petit” massacre. Its huddled houses, built of local stone and so almost intact, have newly built roofs and wood and plaster interiors, and a swimming pool and a tennis court beyond their outer walls. My family swooped like swallows into the village, by train and plane and bus and from far and wide: India, Tunisia, Morocco, Spain, Laos, Cambodia. The young ones woke late, stroked their phones and sometimes cooked for us all. The older ones swam, walked, played tennis, read and shopped in the charming markets of the nearby villages.

Travelling back to London on Eurostar, we were tipped out at Lille to go through French and British security, watched as we did so by armed soldiers, their guns at the ready. The train tore through the tunnel to avoid “trouble” at Calais, where 3,000 refugees are crammed into a makeshift camp, from which they make dangerous and usually unsuccessful attempts to smuggle themselves into lorries or trains travelling to the UK. Passengers on other trains like ours had heard the worrying tramp and patter of feet above as refugees risked their lives by climbing onto the roof and lying flat as the train went through the tunnel under the sea.

These contrasts are intolerable. We, who can travel the world, live, work and holiday more or less where we want to, are encouraged to “debate” whether, where and how many refugees—people who, by definition, are not allowed to debate anything—should be allowed to have somewhere safe to live, to bring up their children, to work and to play. It is impossible to imagine struggling to get your family out of terrifying dangers only to be met with suspicion and even violence in the hoped-for “promised land,” and then await the result of a “debate,” conducted by smartly dressed men and women, about how many of you may or may not be picked out and welcomed into Europe. Razor wire fences and other hideous barriers have been erected to keep these “marauding hordes” out, ostensibly away from the railway lines, but also out of our sight.

Ironically, Germany is ready to take the largest number of refugees. The Germans are welcoming arrivals they see as useful, even necessary, to an aging population: people with the energy and ingenuity needed to accomplish these hair-raising escapes from war and suffering. It is another irony that it is Angela Merkel who deplores the unwillingness of other European countries to take their share of refugees—the German leader who reminds us that if the European Union fails to uphold human rights in this direst situation, it is nothing.

The UK, like everywhere else, has been shocked out of its reluctance to help by that small drowned boy found facedown on a Turkish beach. One wonders whether our political masters would have been similarly shocked had he been black, or naked, or poorly dressed. But we should be grateful that, even if many of Europe’s leaders are unwilling to commit themselves to anything more than the least they can get away with, many of the people they govern have woken up to the horror of what is going on. Even here, and even in Hungary, people are beginning to see that they must resist tyranny wherever it exists, and that to do so may entail acting against—or independently of— their elected governments.