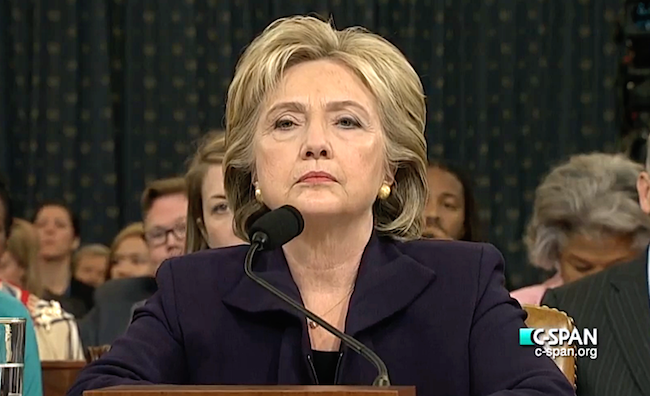 The latest tranche of Clinton emails recalls her pivotal role in the U.S. intervention.

Now that Libya has descended into chaos, Democratic presidential front-runner Hillary Clinton is at pains to dispel the notion that, as secretary of state, she led the U.S. intervention that toppled dictator Muammar Gaddafi in 2011.

Yet the latest tranche of emails from Clinton’s private server, released by the State Department on October 30, shows there’s one individual who would strongly object to those efforts: the Hillary Clinton of 2011 and 2012.

A report in June by the New York Times revealed that in August 2011, Clinton’s advisors had urged her to take credit for what was then seen as a military success in Libya. Now, the newly released emails show that the former secretary of state was herself intent on emphasizing her key role in the affair—and that her team used cozy relationships with the media to help her do so.

In one exchange, on April 4, 2012, a frustrated Clinton complains to her staffers that they’d omitted a number of key details in a timeline titled “Secretary Clinton’s leadership on Libya.” The timeline, which aims to show that Clinton “was instrumental in securing the authorization, building the coalition and tightening the noose around Qadhafi [sic] and his regime,” would later be provided to media.

“Did I meet in Paris w Jabril [sic] (brought to hotel by BHL) on 3/14? It's not on timeline,” she writes in the April 4 email, referring to Mahmoud Jibril, the prime minister for Libya’s National Transitional Council during the country’s civil war, and Bernard-Henri Lévy (BHL), the French philosopher who helped drive France’s own involvement in the conflict. In fact, Clinton’s meeting with Jibril was listed on the original timeline produced by advisor Jacob Sullivan, suggesting Clinton was either referring to a different version of the timeline or, more likely, failed to see it on the document.

“This timeline is totally inadequate (which bothers me about our recordkeeping),” Clinton writes three minutes later. “For example, I was in Paris on 3/19 when attack started. That's not on timeline. What else is missing? Pls go over it asap.” Twenty-three minutes later, Sullivan sent Clinton an updated version of the timeline with the March 19 incident added in.

Clinton emailed her advisors twice more within six minutes, saying, “What bothers me is that S/P [the State Department’s Bureau of Policy Planning staff] prepared the timeline but it doesn't include much of what I did.” Among the items that were left out, she notes phone calls and meetings with Arab officials, as well as her role in securing a March 12 Arab League resolution, which called for a U.N.-imposed no-fly zone over Libya.

The emails also reveal that Clinton’s team was feeding information to the media to push the narrative she is now contesting: that she was the chief force behind intervention in Libya.

In the same email chain, Clinton complains, “The Joby Warrick piece from 10/30/11 includes more detail than our own timeline.” She is referring to a Washington Post article that details Clinton’s “pivotal role” in forging and maintaining the alliance of intervening countries through “her mixture of political pragmatism and tenacity.”

However, Clinton’s team quickly assures her that Warrick’s piece was as thorough as it was because the State Department had diligently furnished him with the necessary information:

The comprehensive tick tock Jake put together … was done in large part for the Warrick piece. The great detail Joby had came entirely from Jake. Joby didn’t do any independent research.

This suggests the timeline was provided to the Post to serve as the basis for the piece. Additionally, the fact that Clinton is rankled that the article’s extensive detail outdoes the timeline, and her staff’s subsequent assurance that Sullivan was the source of this behind-the-scenes detail on Clinton’s leadership, implies that Sullivan—now one of Clinton’s top advisors for her presidential campaign—may have been one of the nameless State Department officials cited by Warrick.

A comparison of the article and the timeline reveals their similarities. The Post piece follows virtually the same progression as the timeline prepared for Clinton. Both cover her arrival in Paris on March 14 and her subsequent meetings with the G8 and Mahmoud Jibril; her work to secure the March 17 United Nations Security Council resolution authorizing a no-fly zone in Libya (as well as Russian abstention on that vote); her efforts to convince Qatar, Jordan and the United Arab Emirates to provide their airpower in the conflict; and her role in pressing more than 20 nations to recognize the Libyan National Transitional Council as the country’s legitimate government.

The piece also leans heavily on unidentified State Department officials and aides who “described the administration’s inner workings on the condition of anonymity.” One, described as a “senior State Department official,” notes that, despite receiving no instructions from the White House to support Libyan intervention upon arriving in Paris, Clinton “began to see a way forward” by her own initiative.

This is all a far cry from the Clinton of today, who tends to paint herself as just one of many pushing for an intervention—and stresses that President Obama made the final decision.

For instance, in her 2014 memoir, Hard Choices, published long after conditions in Libya had deteriorated, Clinton portrays herself as reluctant to push for military action until the March 12 Arab League resolution “changed the calculus.” Likewise, in both the October 13 Democratic debate and her testimony to the House Committee on Benghazi in October 22, she pointed to the Arab League’s “unprecedented” resolution as a key reason she supported intervention.

Yet Clinton’s emails suggest that she saw her own work on the resolution as a critical element in “securing the authorization” for force on Libya. In other words, the Clinton of 2012 saw herself as a principal agent in forging the very resolution that the Clinton of 2015 cites as a turning point in her thinking.

Furthermore, over the last few years, Clinton has tended to lay the decision to go into Libya squarely at Obama’s feet. Clinton says in her memoir that “the president decided to move forward with drawing up military plans and securing a UN Security Council resolution,” rhetorically removing herself from the equation. Likewise, in response to a question by Peter Roskam (R-IL) during the latest Benghazi hearing about whether she “persuaded President Obama to intervene militarily” in Libya, Clinton stressed that “there were many in the State Department” in favor of intervention, and pointedly stated that, “at the end of the day, this was the president’s decision.”

Yet the timeline produced by Clinton’s own team calls her “a leading voice for strong UNSC action and a NATO civilian protection mission” and has her securing “Russian abstention and Portuguese and African support for UNSC 1973 [which authorized a no-fly zone over Libya], ensuring that it passes.” Moreover, the Post article that Clinton’s aides helped influence paints her as the deciding factor in Obama’s decision to intervene. “The president,” the article states, “who had been weighing arguments from a sharply divided Cabinet for several days, sided with his secretary of state,” who had become a “strong advocate” for intervention by the time she spoke with Obama on March 15, according to an anonymous “administration official.”

These emails also raise questions about the relationship between administration officials and the media. The establishment press has been criticized in the past for having cozy relationships with those in power, as well as an overreliance on anonymous administration sources, which allows officials to broadcast their preferred version of events without facing critique or questioning. The New York Times’ Public Editor Margaret Sullivan has noted criticism of such reporting being little better than “stenography” that “takes at face value what government officials say,” and that the Times’ own stylebook advises reporters to use anonymity as a “last resort.”

This wasn’t the only time Clinton’s staffers would work with media outlets behind the scenes to propagate a narrative that benefited them. As reported last month by this magazine, an email to Clinton’s staff by then-Assistant Secretary for Public Affairs Michael Hammer celebrated a June 30, 2011, New York Times editorial urging NATO not to give up in Libya and “stand firmly with the rebels.” Hammer told them that the State Department had arranged for then-Ambassador to Libya Gene Cretz to give NYT Foreign Affairs Editor Carol Giacomo “more ammo” for the op-ed. Tellingly, he added: “We're doing more of this engagement with the editorial writers. Go team!” That piece made no mention of the conversation with Cretz. Other reports have also noted the Clinton team’s massaging of the media on other subjects.

As others have pointed out, despite Republicans’ attempts to use the Benghazi Committee to eat into Clinton’s poll numbers, the real scandal involving Clinton and Libya is her full-throated support for a war that has left the North African nation a chaotic breeding ground for terrorism. Clinton may attempt to run away from her legacy in Libya, but she can’t outrun her own words.