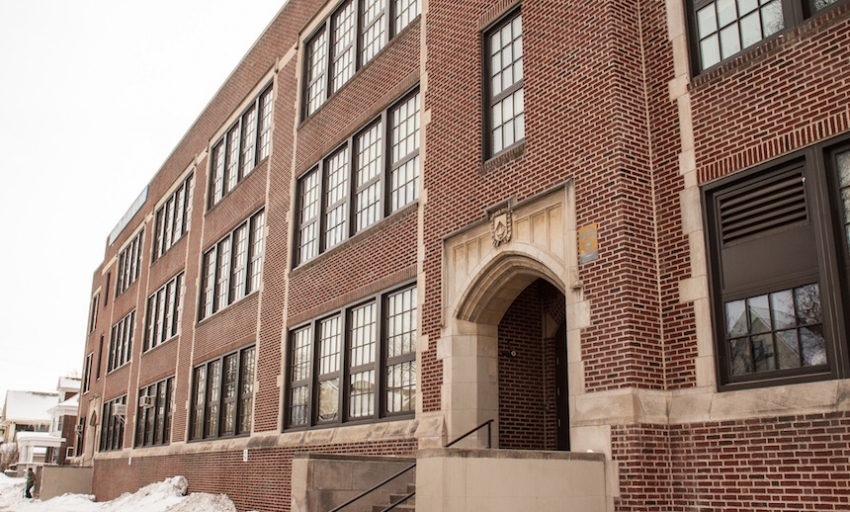 Activists said the reading materials were untested, insensitive and clueless.

The books contained lessons that seemed to be about much more than how to decode words. One book, called “Lazy Lucy,” featured a young African girl who was often too lazy to clean her grass hut.

Community and education activists are claiming victory in Minneapolis after the city’s school board voted on October 13 to push Utah-based reading curriculum company, Reading Horizons, out of the Minneapolis schools.

Reading Horizons entered the district earlier in 2015 by securing a multi-year contract worth $1.2 million to supply the district’s K-2 teachers (and third grade teachers in “high needs” schools) with a phonics curriculum that it promised, if implemented “with fidelity,” would boost reading skills for all K-3 students, while also tackling test-based “achievement gaps” between white students and students of color.

What really made Reading Horizons’ sales pitch appealing, according to district sources, was that the company also promised to provide a set of classroom books, called “Little Books,” for students to use, as a way to practice the teacher-led phonics lessons they would be receiving. To resource-starved teachers, who have reportedly been asking for classroom books for years, this sounded like a great deal.

Until they saw the books in person.

Early in August, the first round of Minneapolis teachers went through a two-day Reading Horizons training session. What first and second grade teachers Shana Dickson and Mandy Perna saw in the Little Books shocked them.

Each set of Little Books included 54 volumes, which matched the various phonics lessons contained in Reading Horizons’ curriculum. The books contained lessons that seemed to be about much more than how to decode words: One book, called “Lazy Lucy,” featured a young African girl who was often too lazy to clean her grass hut. Another, about the invention of the printing press, included images of Christopher Columbus pondering the globe. After reading a book about Marco Polo, the Little Book tells students, Columbus was inspired to set off on his own worldly voyage, where he then “discovered America.”

The books also contained volumes about female characters cheerfully performing domestic duties, such as cooking all day for their husbands. Also, there appeared to be only one Asian character in all 54 books—and that character seemed to have been adopted by a white family. Further, Dickson noted the books promoted only heterosexual families and depicted only white men as kings and only a white woman as a teacher.

Beyond the troubling racially charged, historically inaccurate and sexist images and stories in Reading Horizons’ collection of classroom books, Dickson and Perna reported many other problems:

And then came another shock: Reading Horizons operates with a very religious public profile. On the company’s website, “faith” is listed as the number one “Core Value” for Reading Horizons employees: “We believe in a higher purpose to life. We seek to do His will and to achieve balance in our lives,” the site reads.

This raised a whole new set of questions regarding Reading Horizons: Why was the Minneapolis district giving money to an out-of-state company whose promotion materials contain strongly religious overtones and an apparently all-white board and staff? Could this company, with their deeply offensive “Little Books,” really help all Minneapolis public school kids—the majority of whom are not white—become successful readers?

In response to teacher protests over the Little Books, the school district compelled Reading Horizons to take the offensive materials back, and they were never used in any classroom in Minneapolis. But Michael Goar, interim superintendent for the district appeared to defend Reading Horizons in a statement. Though “[n]o children were ever exposed to the books, and only a small number of teachers were,” he also emphasized that the company had successfully boosted literacy rates in other districts. “Research shows this program has been successful in improving student outcomes across the country, including outcomes in diverse districts like ours.” And the district did move ahead with a full implementation of Reading Horizons’ phonics lessons, minus the Little Books.

Still, public unrest did not die down. A September 8 school board meeting saw a showdown between district supporters of Reading Horizons—including a handful of educators who testified to what they saw as the value of the company’s phonics curriculum—and a vocal group of protesters who were there to demand the district cut all ties with the company.

At the core of the opposition was Shana Dickson, along with fellow Minneapolis teacher David Boehnke, and Minneapolis parent and business owner Chaun Webster.

In late August, Dickson, Boehnke and Webster crafted an open letter to the Minneapolis Public Schools that outlined four demands. Beyond the call for the district to sever its relationship with Reading Horizons, these protesters also want a public review committee for all curriculum decisions, along with an end to the “purchasing of expensive scripted curriculum based on test scores.” Also, the letter calls for more training and resources for teachers so they can come up with their own lessons.

This letter quickly gathered hundreds of signatures, and became the backbone of a persistent, focused protest against the Minneapolis Public Schools’ decision to continue working with Reading Horizons.

The district, however, continued to back the company, and put together a list of talking points in defense of the company’s perceived ability to deliver a worthwhile phonics curriculum to district teachers. At the crux of their support was the idea that test scores show district students need “foundational skills” for reading.

The district’s talking points also offered a tacit admission of wrongdoing on the district’s part by giving a glimpse into how such a controversial decision was made in the first place: “Due to staffing shifts and the desire to get a program in place for the new school year, the books were not comprehensively vetted.”

Minneapolis’ Interim Superintendent Michael Goar had to then admit, at the September 8 school board meeting, that the selection process for Reading Horizons had been “rushed,” and that some who had helped choose the company were no longer working for the district, making it tough to find someone to answer for the mess the district had found itself in.

In fact, the Minneapolis Public Schools seemed unable to publicly handle the swell of opposition to Reading Horizons. After the contentious September 8 board meeting, and in the face of spiraling protest, the district declined to meet with protesters. Instead, Minneapolis officials offered to set up meetings between a Reading Horizons representative and those who had spoken out against MPS’s dealings with the company.

Rather than calm people’s ire, these tactical moves served to further cement opposition to Reading Horizons. This was clearly evident at a board meeting on September 29, when a group of protesters chanting “Whose schools? Our schools!” marched into the meeting and shut it down.

Still, the school district continued to defend Reading Horizons and the strength of its phonics curriculum. In a late September document put together by, among others, Eric Moore, Minneapolis’s director of research and evaluation, the district argued that Reading Horizons’ approach to phonics was adaptable and “multisensory,” and a useful way for teachers to learn how to teach phonics.

The document also admits, however, that there is “limited research on Reading Horizons itself,”  a subtle but important admission on MPS’s part. Up until this report was published, the district had been adamantly insisting that “[r]esearch shows this program has been successful in improving student outcomes across the country, including outcomes in diverse districts like ours.” (Twin Cities blogger Mary Turck took this argument apart in a September post on her News Day blog, titled “Reading Horizons ‘proves’ that Reading Horizons works (and I have a bridge in Brooklyn to sell you).”)

Sustained local resistance to Reading Horizons, along with national media attention, continued to eat away at the district’s ability to defend its contract with the company. Although a corps of Minneapolis literacy specialists continued to stand by the phonics program, partially because the district had not provided access to one in recent memory, pressure continued to build. Finally, at the October 13 board meeting, close to 100 protesters gathered to fill the meeting room with a bevy of bright blue ribbons, to be waved in unison whenever Reading Horizons was mentioned—the idea of retired Minneapolis school teacher Teferi Fufa. Fufa, who emigrated to the United States from Ethopia in the early 1970’s, said he bought the blue fabric and cut it into strips as a way for protesters to show unity.

For Fufa, who taught in the district for 23 years, the decision to get involved in protesting Reading Horizons was not a difficult one. “When I saw the pictures of ‘Lazy Lucy,’ it reminded me of the old depictions of African Americans, and I thought, ‘We should be through all of this.’” Fufa spoke at the October 13 meeting and disputed the district’s insistence that Reading Horizons’ curriculum alone would help boost student achievement.

No curriculum is a “silver bullet,” Fufa said. And “if we put rotten stuff in front of our children, what does it to [their] engagement” in school?

“Instead of relying on outside consultants and corporations,” Fufa said later in an interview, “the district should start valuing the ideas and efforts everyone—teachers and students—is putting in.”

Also joining Fufa at the podium that night was Minneapolis parent Roxxanne O’Brien, who gave a blistering speech about the need to move away from teaching kids to “submit to a white, middle-class, male culture,” and instead implored the district to prioritize progressive values. “Why aren’t we teaching our community’s children to be sustainable and not dependent on corporations?” O’Brien asked, wondering where the lessons on environmental and food justice were, among others.

This time, instead of resisting the protesters’ efforts, the board seemed resigned to the fact that the Reading Horizons issue was not going to go away. Board member Nelson Inz, newly elected in 2014, wrote a resolution calling for the Minneapolis schools to cancel the Reading Horizons contract, on the grounds that it violated a slew of the district’s own policies around equity, diversity and proper procedure regarding how funds are spent.

Inz, who teaches social studies at a Montessori high school in St. Paul, said he wrote the resolution because he spends a lot of time “combating colonial myths” in the classroom: “You see the damage it does to our culture, when you have 16 year olds who believe Columbus discovered America.”

In a moment of calm at the board meeting, where a sense of the inevitable seemed to hang in the air, the resolution passed by a 7-2 vote. The details, regarding whether or not Reading Horizons will return any of the $1.2 million the cash-strapped district has sent them, have yet to be decided.

For teacher Shana Dickson, getting the board to cancel the contract is one small step forward, and part of the “bigger fight for justice and community engagement within the district.” But, she says, “We are still waiting for someone from the district to be held responsible for this decision.”