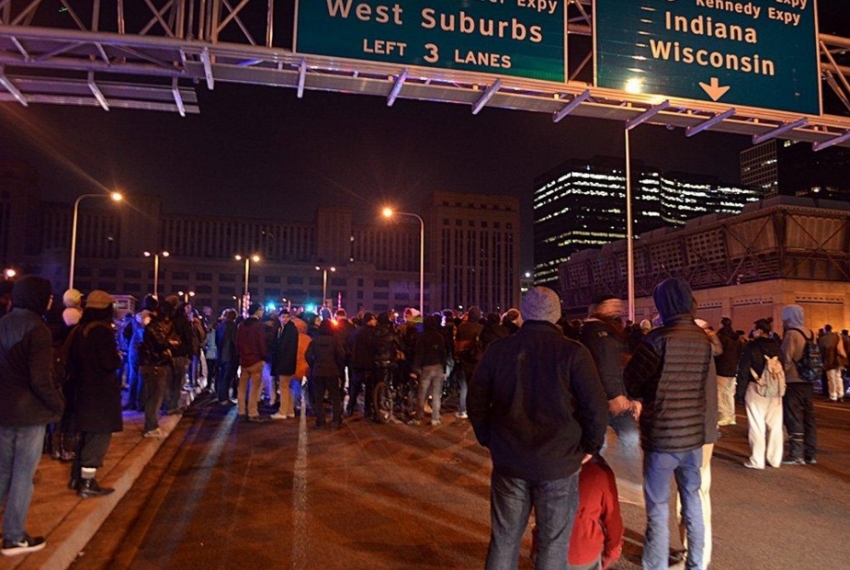 For Laquan McDonald and All Victims of Police Brutality, We Have To Win

If the progressive movement can’t organize itself to fight back against racism and injustice in Chicago and around the country, police murders like those of Laquan McDonald, Freddie Gray and Rekia Boyd will never stop.

After all of this anger is vented and emotions run dry, if we do not move this power into policy, we will have rattled our sabers for nothing.

There is no ache more profound as the experience of losing a loved one, so my heart goes out to LaQuan McDonald's family. This young man is more than a symbol of a violent and morally bankrupt system—he was someone’s child. So, let my first words be words of love and condolences of his family.

Sixteen shots. Four hundred some-odd days. Countless tears and empty promises. Laquan was murdered by the state. And we have to recognize that this moment is not an isolated incident—not in Chicago and not in America. Anyone who believes that Chicago police chief Garry McCarthy, Mayor Rahm Emanuel or State’s Attorney Anita Alvarez care at all for this boy is deluded and disconnected from the realities our black communities face. These three have no concept of truth. They can’t handle the burden of admitting that they have failed in their most sacred duty, to protect and serve, and instead have become symbols of oppression, corruption and racism. Their pretty words are full of poison, and their villainous record speaks louder than any press conference. They never loved us, and they never will.

While this city erupted in pain and protest, Mayor Emanuel was at a Christmas tree lighting ceremony, keeping up the charade that everything is just fine in Chicago. Alvarez’ office waited over a year to charge Jason Van Dyke, the officer who shot McDonald, until a dogged journalist pried the dash cam video out of the department’s hands and forced them to release it to the public. And we all know her office let officer Dante Servin get away with 22-year-old Rekia Boyd’s 2012 murder for as long as they could get away with it. McCarthy’s blue wall of silence has Alvarez’s office on one side and city hall on the other. None of them can be trusted, and none of them should be able to keep their jobs.

But, those of us in the “movement” are not without blame. If “we who believe in freedom shall not rest,” that means as long as one of us is oppressed, none of us should rest comfortably. After marching in the streets last night, being led by the fearless leadership of Black youth in our city, I have been chastened to do better by my community. We have to examine how our own “liberal” and “progressive” systems allow oppression and privilege to taint our decisions, even in the midst of displays of solidarity. Last night, I saw the press flock to white allies, who were readily available with a soundbite, instead of redirecting the focus to the youth and Black folks who were leading the fight. If our theory of change is that the people most affected by the issues of injustice should be leading us, then we have to practice what we preach.

Being anti-racist means that you actively shift the dynamics of power that support racism. In the movement for Black lives, if you aren’t Black, you shouldn’t be clamoring for the limelight, leading marches or trying to be anyone’s savior; this is the time for you to listen, support and use your privilege to lift up Black leadership. This isn’t the time for elected officials to posture and grandstand—it’s time for them to stand up against the racist and classist systems and take to the streets with us. We have to humble ourselves in front of our brothers and sisters and listen to what they know, or else we show that we don’t really know anything at all.

I don’t want to hear any Black-on-Black crime statistics. Yes, violence in our communities is a real issue, and all black lives matter everywhere. But the root causes of crime and violence in our community is the poverty and lack of resources that have systematically destabilized our communities for decades. You know who controls the resources, stands in the way of equitable revenue solutions, supports the 1% and destroys public education? These same clowns who are now asking us all to be “peaceful, patient, and respectful.”

At the Chicago Teachers Union’s mass rally earlier this week, a Chicago Public Schools student took the microphone and mentioned that if we don’t pay attention to the intersectionality of issues, we will miss the forest for the trees. Everything is connected. We have to require the divestment of money from the policies and systems that uphold poverty (militarization of police, corporate loopholes and subsidies, tax cuts for the wealthy) and invest those funds into education and other programs and policies that will contribute to the long-term sustainability of our most marginalized communities. If a budget is a moral document, then our city's and state’s budgets should reflect the morality that people’s lives matter more than corporate greed. All this has happened before, and will happen again if we don’t interrupt the cycle.

After all of this anger is vented and emotions run dry, if we do not move this power into policy, we will have rattled our sabers for nothing. As long as we are letting our enemies dictate our tactics, box us in and keep us fighting amongst ourselves they will always be a step ahead of us. This movement cannot be scripted. Our talking points will ring hollow if they are not from the heart. The late Hueron Wilks, who was a long-time organizer at Action Now whom I had the pleasure of working with, always used to say “what comes from the heart touches the heart.” If we are speaking from our hearts, from a place of love, we will reach one another.

We will make mistakes, but that’s a part of growth. We will disagree, but that will challenge us to refine or reinforce our beliefs. We will miss opportunities, not get the “credit we deserve” and make all sorts of unsound decisions. But that can’t stop us. Let them call us disorganized, let them marginalize us “too young” or “too angry.” Let them call us irrelevant. We will challenge one another, sharpen each other’s words and actions, and become the precise and powerful instrument for justice that will lead us all towards liberation.

We have to use whatever platforms we have to redirect the narrative back to the demands of the community. We have to rearrange our priorities and demand that our elected officials do the same or else we are complicit in our own destruction. We are already standing on the shoulders of those who have fought before us. Let’s continue to uplift each other, stand up for each other, and fight back. Laquan McDonald and his family, and all the other Laquans and Rekia Boyds and Freddie Grays around the country are counting on us to get it together. We can't let the systems and people who killed him, kill our movement as well.