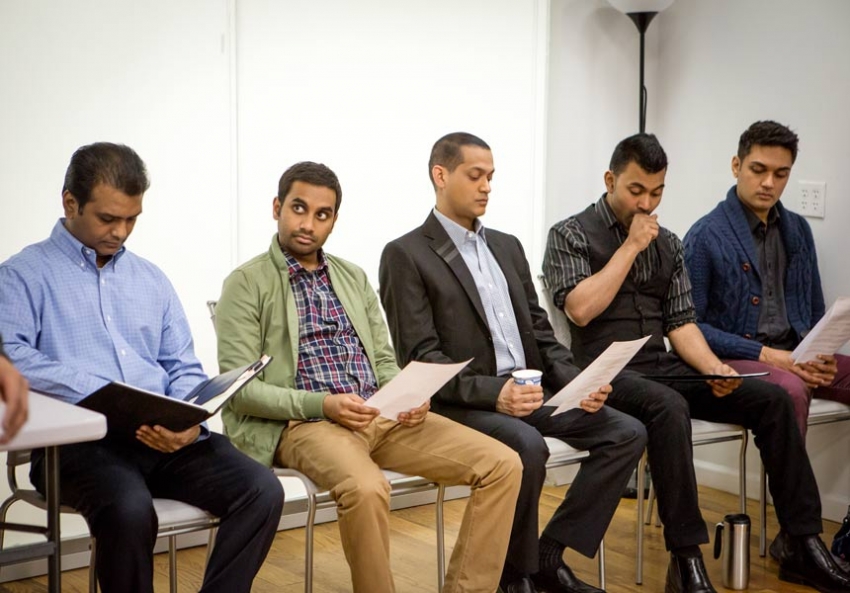 Master of None routinely takes on racism and sexism; here, Aziz Ansari’s character, Dev, waits in a line of South Asian men to audition for a taxi driver role. (Netflix)

Ansari and his character, Dev, genuinely want to do good. But they’re missing the political framework.

Like many good people, Ansari just wants everyone to get along, be nice to each other, and make better choices. But without anything to rely on but liberal privilege politics, he presents a false trade-off between doing these nice things and one’s personal material interest.

Aziz Ansari’s wonderful new Netflix series Master of None marks a welcome shift from the last generation of retrograde comics who sought laughs at the expense of the most marginalized. (Think Andrew Dice Clay’s misogynist nursery rhymes). Ansari is a proper progressive, self-consciously trying not to be an asshole. In an industry so rife with assholes, the fact that he succeeds is a huge relief.

The rousing reception to the show’s 10 episodes tells us something good about the cultural sensibilities of its predominantly young audience. Among the target demographic of the show—the people advertisers call “millennials”— meanness and venality seem to be giving way to a progressive ethos. But Master of None serves as a case study of the limits of trying to make the world a less terrible place through a heaping dose of liberal niceness, without a broader political framework.

The fourth episode, “Indians on TV,” is a striking example. Ansari’s character, an upstart actor named Dev, meets a friend, also an Indian actor, at an audition. They lament that the only Indian roles on television fit cultural stereotypes: the “thank you, comeagain” type, like Apu, the Indian immigrant grocery store owner from The Simpsons. The episode continues with an exploration of racism in the entertainment business and Dev’s choice between confronting it or playing ball for career reasons.

In one scene, an executive caught by Dev making a racist joke in an email takes him to a Knicks game to smooth things over. In a Madison Square Garden suite, the executive introduces him to Busta Rhymes, a friend, who tells Dev, “I don’t think you should play the race card. Charge it to the race card— feel me?” Originally enraged and ready to leak the remark to the press, Dev reconsiders. Maybe this guy, Dev (and the audience) wonders, isn’t all that bad. Maybe he deserves a break. Hey, he has a black friend.

Faced with racism, a personal apology and courtside Knicks tickets seems to do the trick.

A companion of sorts to the episode is a New York Times piece by Ansari that ran in early November. Mirroring a story told on the show by his character, Ansari writes about how inspiring it was for him as a child to watch Short Circuit 2, a 1988 film starring an Indian scientist. Years later, when in college, he discovered that the lead actor was in fact a white guy in brownface.

Ansari talks about the type casting that minority actors must deal with and laments the fact that “when Hollywood wants an ‘everyman,’ what it really wants is a straight white guy.” His solution is for the industry to change its ways and “give minorities a second look.” For hesitant executives, he offers an example of such a strategy paying off: the Austrian Arnold Schwarzenegger, who for Ansari is an “unsung pioneer for minority actors.” He argues: “There had to be someone who heard his name tossed around for the role and thought: ‘Wait, why would the robot have an Austrian accent? No one’s gonna buy that! We gotta get a robot that has an American accent! Just get a white guy from the States. Audiences will be confused.’ Nope. They weren’t.”

As an Indian American, I understand where Ansari is coming from. The tokenization of minorities in popular media has only reinforced racism. But his Schwarzenegger solution leaves much to be desired. Master of None offers anti-racism at the level of representation, disconnected from class and the struggles for redistribution necessary to give it deeper substance.

The other explicitly political episode of the series, “Ladies and Gentlemen,” which focuses on male privilege, falls into the same trap. It begins with two examples of the very real harassment and discrimination that women face: Dev hears a colleague’s story about being followed home from a bar, and later, the director of a commercial he’s working on treats the women as mere “eye candy.” Dev remarks on this and the director takes it to heart, rewriting the commercial to depict women as grill masters. This leaves Dev without a role. He’s a bit disappointed, but still happy enough to have made a difference.

The episode’s feminism suffers from the same liberal trap as the anti-racism in “Indians on TV.” Like many good people, Ansari just wants everyone to get along, be nice to each other, and make better choices. But without anything to rely on but liberal privilege politics, he presents a false trade-off between doing these nice things and one’s personal material interest. The episode assumes that workers must battle each other over a finite amount of decent employment. With a jobs guarantee and higher wages for all, this wouldn’t be the case.

The laudable victory of the episode—women being less disgustingly depicted on television—is as far as Ansari’s politics can take him. The material demands that could more substantively empower ordinary women are not on the table. Neither is the powerful socialist idea that all members of the working class would benefit from a society without oppression more than they do from the status quo—that the women on set and minority actors like Dev could advance together.

Ansari is a (particularly funny and talented) product of his age, an age without a vibrant Left and few signs of the power of collective action. Good people are still battling, as Ansari does, against individual acts of bigotry. But that alone won’t be enough to build the world he seems to want.