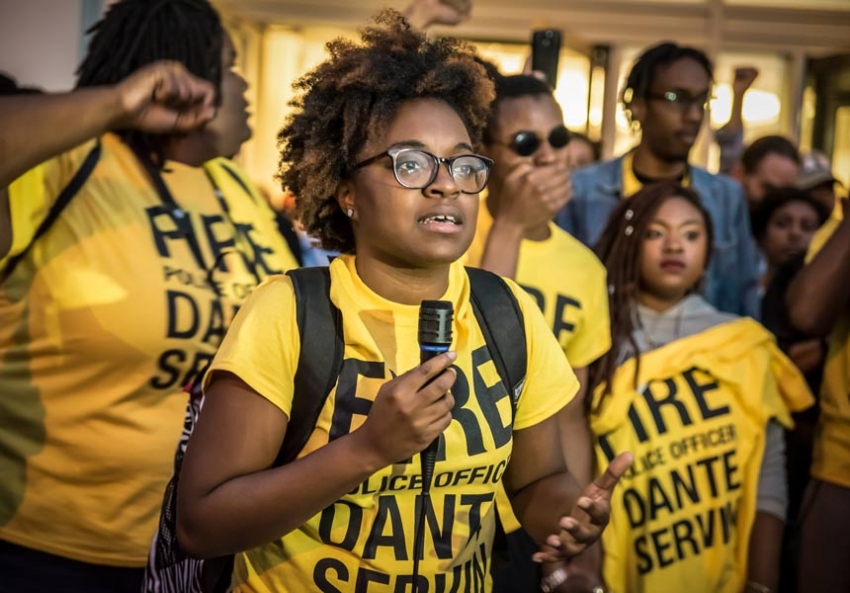 Not Your Grandfather’s Black Freedom Movement: An Interview with BYP100’s Charlene Carruthers

We do not believe that [Rahm Emanuel and Anita Alvarez] have the capacity to be in positions where they have decision-making power over so many lives. They’ve demonstrated over and over again that they are not effective at making good decisions when it comes to our lives.

There is little doubt that the Black Lives Matter era of protests will be branded as a millennial moment. But Black women are so prominent in the movement’s leadership, the era might also be characterized as a matriarchal moment. For example, in the outrage following the release of the Laquan McDonald video depicting a 17-year old being shot by a Chicago cop 16 times, four of the most prominent groups that spoke out—Black Lives Matter, Black Youth Project 100 (BYP100), We Charge Genocide and Fearless Leading by the Youth (FLY)— were led by Black women.

This gender alignment marks a stark deviation from a deep tradition of patriarchal leadership. This is not your grandfather’s black freedom movement.

Charlene Carruthers, the 30-year-old national director of BYP100, makes clear that this female ascendancy, as it were, has scholarly roots in the sterling work of feminist public intellectuals such as Cathy Cohen of the University of Chicago and Barbara Ransby of the University of Illinois at Chicago. BYP100, for example, is an offshoot of the Black Youth Project, a venture launched by Cohen in 2004. A well-known theorist of Black queer feminism, Cohen’s views have strongly shaped the agenda of BYP100.

In These Times sat down with Carruthers to talk about the role of BYP100 in Chicago’s anti−police-violence movement and why the group thinks it’s crucial to “fully incorporate” a Black queer feminist perspective.

In 2012, a group of young Black people who were part of an advisory council for the Black Youth Project said to Cathy Cohen, “We want to have a national convening with other Black activists from across the country.” And so Cohen secured the resources, and 100 young Black folk were invited to attend a convening called the “Beyond November Movement” in 2013. What we intended was to discuss movement-building for Black liberation beyond electoral politics, in the aftermath of the election of President Barack Obama. That Saturday night, the George Zimmerman verdict was announced. We gathered in the circle and listened. There were all kinds of reactions to the “not guilty” verdict: Some people cried, some people screamed, some people left the room. And we stood in a circle processing that moment.

But you had gathered for something completely different.

Right. And I fully believe if we were not gathered that particular weekend, on that particular night, BYP100 wouldn’t exist. There were many things that happened immediately, but we all committed to going to the 50th anniversary of the March on Washington, in Washington, D.C. It was there that we actually drafted a mission and core value statement and began to think of ourselves as an organization.

So the Zimmerman verdict is what shaped BYP100’s focus on institutional violence and mass criminalization of Black youth?

Folks who attended that initial convening come from various parts of movements: There were artists, elected officials, folks who did LGBTQ rights organizing, gender justice organizers, folks from labor unions—all kinds of folks were in that room. It was out of that moment that we decided to focus on mass criminalization and, really at the core of it, looking at anti-Blackness and its role in the oppression of Black folks, particularly in this country, but also worldwide.

You said “anti-Blackness.” Was that an attempt to be more specific than the general term “white supremacy”?

We weren’t doing that level of analysis collectively at that particular moment. But we named anti-Blackness, white supremacy, patriarchy, homophobia, transphobia as the things that we needed to fight against, and recognized that many of those things contributed to the killing of Trayvon Martin.

You mention homophobia; that’s a new dimension to the Black freedom struggle. Was there any resistance?

Well, Cathy [Cohen] is known for her scholarship in both queer studies and Black feminism. And so at any convening that she was involved in, people came with that consciousness.

I would say that it guides what we do in significant ways. Cathy, and other Black women and feminists, too, like Barbara Ransby, Barbara Smith, the late poet Audre Lorde, the late Ella Baker.

How are older, more established groups responding to your efforts?

There have been mixed responses. Our membership is 18 to 35, but our organizing work has always been intergenerational. We are under no perception that we can do this alone. We do believe young people’s leadership should be valued—and in many ways, prioritized—in movement building and organizing, in order to ensure that it persists. I’ve also found that many of the disagreements are along the lines of ideology and not necessarily age.

How did BYP100 get so deeply involved in this current struggle against the Chicago Police Department in response to cases like the killings of Rekia Boyd and Laquan McDonald?

The analysis that we have—our worldview, as a collective—and folks’ understanding of what’s at stake this particular moment: not just the lives of some hypothetical person, but our lives. The struggle against CPD is one aspect of the long-term struggle of abolishing anti-Blackness. Taking up the struggle for the sake of accountability in the killing of Black people like Laquan and Rekia is essential.

Do you have particular goals? For example, do you want the resignation of Chicago Mayor Rahm Emanuel or Cook County State’s Attorney Anita Alvarez, who are accused of suppressing the Laquan McDonald video?

We’re calling for the resignation of both. We do not believe that they have the capacity to be in positions where they have decision-making power over so many lives. They’ve demonstrated over and over again that they are not effective at making good decisions when it comes to our lives. We also want the Chicago Police Department, which receives nearly 40 percent of the city’s budget for public services, to be defunded, and for those dollars to be invested in quality public schools, affordable housing and job creation. And we see that happening through a participatory budgeting process.

What about electoral politics?

Electoral and civic participation is the third rung of our overall theory of social change—part of the set of tools we have to create transformative change. The other two rungs are direct action organizing and public policy advocacy.

Many of us older activists have been waiting a long time for something like this. What fired up your passion for this kind of engagement?

I grew up on the South Side of Chicago. My family could be best described as working-class. Some of my earliest experiences with power and beginning to understand the kind of world we live in were at the welfare office with my mother, or hearing my father tell stories about people he’d trained receiving promotions over him. I first got involved in activism in a real way when I went to college at Illinois Wesleyan University. At the end of my very first year I had the opportunity to go study politics in South Africa. We were there 10 years after the end of apartheid. Going to South Africa was perhaps the closest I could get to what it could look like if I was around in America in 1978. I was 18 and coming from a city that is still very segregated. That trip expanded my consciousness around what it meant to be Black on a global level or outside of Chicago, really, and got me interested in politics. I didn’t decide to be an organizer until after I finished graduate school, in 2008.

BYP100 is committed to training this generation and future generations of young Black activists to organize and mobilize in order to create transformative change for all Black people. We do this work through what we call a “Black queer feminist lens” because we believe that in order to achieve liberation for all Black folks we have to be radically inclusive—not just in our analysis, but also in our practice, in how we go about leadership. We believe that a Black Freedom Movement in our lifetime is possible.