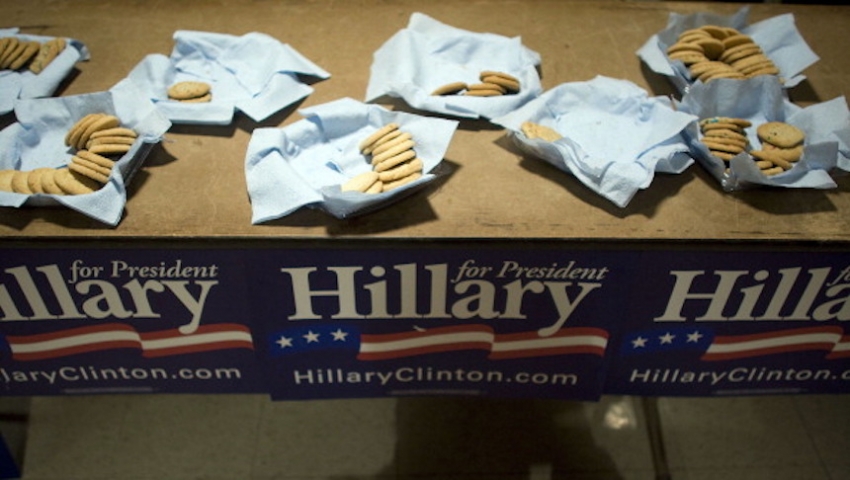 The story of Hillary Clinton’s first campaign and her outrage at Nixon’s 1960 defeat—plus her famous chocolate chip cookie recipe.

This essay originally appeared in the May 2008 issue of In These Times. When ITT told me that they’d like to re-run the piece on-line (Hillary stories never get old), they gave me the option of “readjusting” it for today’s news cycle.

Since every word of the historic narrative is Absolutely True, little can be changed. However, a footnote is in order to inform those of you not sentient in 1992, that the stories touchstone, a “cookie contest,” refers to a Family Circle magazine pre-election bake-off between First Lady Barbara Bush and Soon-to-Be-First-Lady Hillary Clinton. We can only hope that spousal bake-offs are relics of the last century, although it’s not hard to imagine several of the Republican wives reviving the practice.

As for essential updates, there was only one needed. In the last sentence. You’ll see what I mean. The rest can stand pat.

I first ate cookies at Hillary Rodham’s house on Wisner and Elm in 1960. Were they her now-famous chocolate chip cookies? Perhaps. But whether this is the recipe for the cookies I ate doesn’t matter. The main dish that Hillary served, even back then, was politics.

I had met Hillary in the fall of 1957—in the fifth grade of Eugene Field School in Park Ridge, Ill. We weren’t best friends. She was a Girl Scout. I was a Camp Fire Girl. She was better at sports. I was better at music. We were academic rivals. In the sixth grade, we were both the spelling champions of our own classrooms. But during the all-school championship spelling bee, I was home sick in bed and Hillary won the glory for her room. My friends maintained that I could have beaten her, had I been there. Right—just like Nixon could have beaten Kennedy.

We were attending Ralph Waldo Emerson Junior High—a brand-new school that was turquoise and beige and glass and looked like a kitchen ad out of House Beautiful. It was there that Hillary came into her political own. She decided to run for class president, and I decided to join her campaign. I would go over to her house and we would drink milk, eat chocolate-chip cookies, think up campaign slogans and draw campaign posters.

For the longest time, I had one of those posters. It read, “Hillary for President. Run with Hillary.” Bounding across the poster were images of horses. I am sure Hillary recruited all the best horse drawers in the class to come over and draw stallions. (Well, geldings—I mean, we were girls.)

But it wasn’t enough. She lost to a boy named Dave Kraemer. She later told me that she lost because all the boys in the class—and a few of the girls—believed a girl couldn’t be president. That campaign was our bonding experience—I joined Hillary’s circle. We ate at the same lunch table, and together in the fall of 1960, we experienced another presidential race—between John Kennedy and Richard Nixon.

For all of us, being Republican and Protestant (Hillary and I were both Methodists with dangles of Sunday-school pins to prove it), only one person was qualified to win that election—and he wasn’t Catholic.

The day after the election, on Nov. 9, 1960, we were sitting at our table in the Ralph Waldo Emerson lunchroom, having a dismal meal. We stared around. We clenched our hands. We lamented that we were too young to vote. We were powerless. What could we do? Nothing.

Then, Hillary said, “I am going to do something about it.”

But she continued: “You know why Nixon lost?”

We all knew why—it was Chicago and its Democratic machine. The city had voted heavily for Kennedy, and because of that, all of Illinois’ electoral votes had gone not to Nixon but to Kennedy, resulting in Kennedy’s victory. (In truth, even if Illinois had gone to Nixon, Kennedy would have still won, but that myth lives on.)

Anyway, we had to blame someone for this outrage and there were only three people you blamed for everything if you lived in Park Ridge—Nikita Khrushchev, Jimmy Hoffa or Mayor Richard J. Daley. This time, of course, it was “da mare” who had done the dirty work—the person who controlled the dead vote and had the living vote two or three times. We knew this cold, and so did Hillary. So she said: “I’m going to call up Mayor Daley right now.”

We all walked with her out of the Emerson Junior High cafeteria, and up to the pay phone. Hillary took out a dime, got the number for the mayor’s office and then called. We stood there thinking, “How can she do this? How can she have the nerve?” We were thrilled.

Well it was lunchtime, and she didn’t reach the mayor. You know, here we were having our power lunch, and Daley was no doubt having his. But Hillary did reach someone in his office and she gave that person a piece of her mind.

Then we went back to our table, and finished our milk and shared our cookies. We knew that we had just been a part of something out of the ordinary—that for a moment we weren’t powerless teenage girls.

But we never would have guessed that years later homemade cookies would reappear as part of another national campaign.

So, here it is, Hillary’s cookie recipe. They are good. And when Bernie Sanders wins the Democratic nomination, I am going to bake them to celebrate.

Drop well-rounded teaspoonfuls of batter on greased baking sheets. Bake for 8 to 10 minutes or until golden.