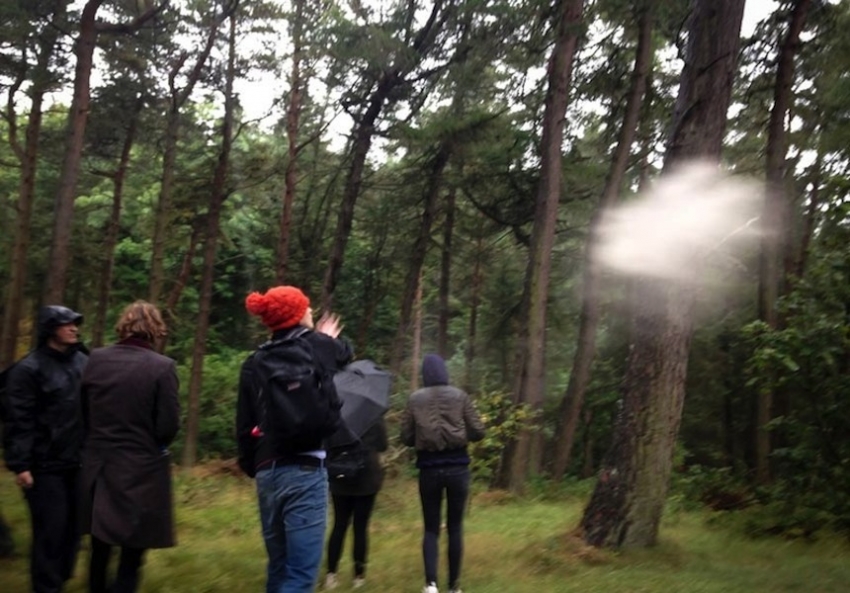 Friends and family scatter the ashes of Karl Miller, the founder of the London Review of Books, in the Pentland Hills south of Edinburgh. (Jane Miller)

Learning to accept the inevitable

We must all learn to talk about dying so that we can work out how to live as well as we possibly can under the circumstances.

For a whole year my husband Karl’s ashes were tucked into a tasteful maroon box and matching carrier bag and hidden from view in another box by my front window. I’d sometimes have to nudge the box aside as I opened the window to water the flowers on the windowsill, and I always apologised to him as I did so.

And then, on the anniversary of his death in September, the whole family and some friends made their way to Edinburgh, where Karl grew up, and to the Pentland Hills to the southwest of the city. There we scattered his ashes, handfuls of silvery sand, among the Scotch pines. They rose as if by magic into the air before disappearing in little puffs of smoke. The sun had shone in the morning, but true to form, there was rain for our scattering. Making our way down the hill afterward, we were overtaken by a group of merry soldiers, who seemed to us mysteriously drunk and oblivious. We were all curiously elated.

No one can say we haven’t been warned that we’re mortal. Christopher Hitchens wrote the essays in Mortality in the year he knew was his last, 2011, and Clive James has publicly eaten humble pie for announcing his imminent death all over the place more than a year ago and being still—embarrassingly—alive. And now I’m reading Being Mortal by the good Dr. Atul Gawande, whose Indian grandfather lived to be nearly 110, cheerfully dominating his family while relying on their constant support. The book is a bestseller here, and in its way an inspiration.

It’s not that Gawande expects Western families to emulate his original Indian one. He knows we’re bad at mixing the generations, let alone acknowledging the preeminence of the oldest family member. What he wants, mainly, is to disabuse us of the idea that medicine can always make things better. We should stop expecting to be cured of most things when we’re old. Doctors, he writes, “have reached the point of actively inflicting harm on patients rather than confronting the subject of mortality.” We must all learn to talk about dying so that we can work out how to live as well as we possibly can under the circumstances. That seems both right and impossibly difficult.

We’re bound, Gawande tells us, to lose quantities of muscle strength and of sight and hearing and brain cells and mobility in old age, and he doesn’t spare us the details of the appalling illnesses and their depredations. He’s given me such a fright that I made a rare visit to my doctor the other day to check that the moles on my arms were not cancerous (they aren’t, and are apparently standard old-age stuff), and I now walk to the swimming pool with my eyes permanently directed at the pavement for fear that I will trip over a child or a dog and tumble to the ground as he describes so many of his ancient patients doing.

His enthusiasms for what can be done to mitigate these horrors can be rather terrifying, too. Imagine having to assemble a birdcage to house a pair of parakeets, in order that they may share your relatively limited living space in a new-age nursing home. That is what happened to a houseful of sad old people in upstate New York who, at the benevolent mercy of a wildly encouraging innovator, were also introduced to a menagerie of dogs, cats, rabbits and chickens. Gawande manages, just, to wipe the smile off my face and even mitigate my skepticism by insisting that the inmates were wonderfully cheered by their animals.

It may be Gawande who has inspired me to join a French conversation class, which has meant taking a test to discover my level of fluency. The questions you had to answer on the computer were mostly about feminism and green politics, so, though I had to beg for help with the strange Apple screen, I did well. The danger is that I may have to join one of the advanced groups where the discussion topics involve international finance, and that won’t be much fun. But a proper conversation with a real live Frenchwoman afterward meant that I now know the French term for scattering ashes. You don’t disperse them, as I’d thought. You éparpille les cendres. And now I’ve started to miss Karl’s ashes.