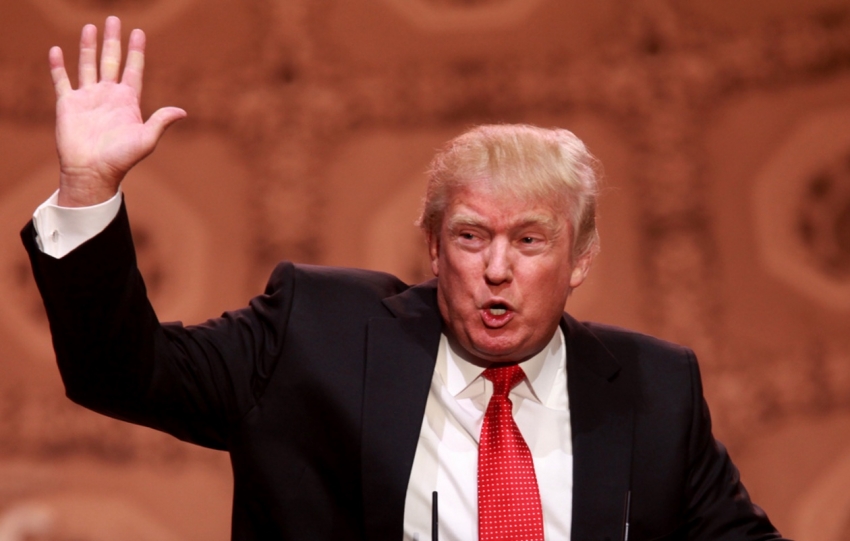 Donald Trump and the Aesthetics of Fascism

What a 20th-century Marxist art critic can teach us about a very 21st-century candidate.

More than any other American presidential candidate in recent memory, Donald Trump understands the ideological power, the raw manipulative magic, in politics as aesthetics.

Donald Trump does not make it easy to refrain calling him a fascist.

To be sure, people have been willing to call him that well before Democratic non-entity Martin O’Malley called him that. Since then, the debate has not so much boiled over as been reduced to a simmer, percolating and waiting for the billionaire-candidate to say or do something that would once again push it back up over the top.

Enter the “Freedom Kids,” three adorable little girls who opened up Trump’s campaign stop in Tampa, Florida. To the tune of the “Over There”—the feel-good hit of trenches and mustard gas—they invited the audience to join them in celebrating as America’s enemies “face the music.” Behold:

Apologies for freedom, I can’t handle this.

When freedom rings, answer the call!

On your feet, stand up tall!

Freedom's on our shoulders, USA!

Enemies of freedom face the music, c'mon boys, take them down

Deal from strength or get crushed every time

This is a cartoon version of American nationalism. The sheer absurdity of the performance is stunning. And yet, Trump’s supporters will surely both love it and accuse anyone who doesn’t of being a terrorist and a communist.

All of this points to one of the reasons why the discussion about Trump and fascism is such a difficult one to resolve. More than any other American presidential candidate in recent memory, Donald Trump understands the ideological power, the raw manipulative magic, in politics as aesthetics.

The phrase “the aestheticization of politics” is borrowed from the late Marxist philosopher and cultural critic Walter Benjamin. Benjamin’s work has experienced a resurgence in interest over the past year. Partially, this has to do with the 75th anniversary of his death (suicide, poignantly enough after the news that he was about to be basically handed over to the Nazis). But what really animates the timeliness of his writings is the brilliant way he was able to diagnose just how capitalism saturates itself into the fabric of culture.

In his 1936 essay “The Work of Art In the Age of Mechanical Reproduction,” Benjamin charted the way in which technology had forever changed art. The ability to reproduce an image or a sound countless times had created the potential for the democratization of art. But that democratization was prevented by the means for that reproduction remaining the hands of a few. Thus, it was possible for undemocratic regimes and governments to use art for their own benefit the way it hadn’t been previously feasible.

Benjamin was writing with Nazi Germany in mind. This was a regime that knew how to deploy aesthetics ingeniously. Even as Hitler and the Third Reich railed against the poisons of modernity, they both used the latest technology to relay their message. They grabbed people’s attention and held it, igniting their imaginations and providing them with a sense of ownership over a system that would just as soon see them driven into dirt. Says Benjamin:

Fascism attempts to organize the newly created proletarian masses without affecting the property structure which the masses strive to eliminate. Fascism sees its salvation in giving these masses not their right, but instead a chance to express themselves. The masses have a right to change property relations; Fascism seeks to give them an expression while preserving property. The logical result of Fascism is the introduction of aesthetics into political life.

The crisp, angular uniforms for party members cranked out by the thousands, the massive orchestrated rallies, the technologically innovative films of Leni Riefenstahl—these are all perfect examples of how fascism aestheticized politics to its own end. All employed the rhythmic regimentation of life, the fetishization of raw power and sacrifice for the Fatherland. Violence was not celebrated for its own sake, but was seen as a necessary and fascinating virtue, even beautiful for its ability to mobilize people’s minds and bodies.

The resemblance between these and the Freedom Kids performance, or Trump’s descriptions of a “great, beautiful wall” along the Mexico border, are clear. All equate freedom with the ability to exert absolute power. All are the intended substance of the vague slogan “Make America Great Again.”

But the aestheticization of politics does not (by itself) equal fascism. Benjamin’s argument is that fascism represents merely theintroduction of aesthetics into politics. On the one hand, he is arguing that the manipulative link between politics, art and fascism is not strictly causal. On the other, he’s saying that the ability to make human suffering pretty for political gain is something that can persist well beyond the decline of classic fascist dictators like Hitler, Mussolini or Franco.

In fact, if there is anything we can say about the aestheticization of politics in our own age, it is that it’s alarmingly quotidian. Contemporary cultural critics like Terry Eagleton, Martin Jay and others have observed this in their own writings. David Harvey, in his 1990 book The Condition of Postmodernity, argues that neoliberalism and its postmodern cultural logic have made meaning and coherence flexible, relative, accountable not to facts, but to subjective feelings. In this landscape, the aestheticization of politics is more effortless than ever.

Telescope this forward to today. Social media has made the individual persona or narrative, regardless of truth, endlessly reproducible through the electronic channels of Twitter and Facebook. Trump clearly knows this. And his time on The Apprentice proved that his Lifestyles of the Rich and Famous manner was ultimately adaptable to a 21st-century cultural tenor. He has a bottomless bank account to back it up. Add in a white, increasingly old middle class, palpably anxious about whether their days are numbered that can seal themselves in a media bubble echo chamber should if they really want to, and you’ve gone a long way toward explaining what’s underneath Trump’s poll numbers—and what makes him somewhat exceptional.

His media strategists are masters at detaching meaning from fact, making words accountable only to themselves and how loudly they’re shrieked. This makes him a quintessentially postmodern candidate contrasted to an age when the cold, everyday facts of collapse, crisis and apocalypse are unavoidable.

Trump taps into a vein of very real fear, and uses virtually any unmoored fact he can find to mobilize it. It is precisely why, though it is quite incorrect to label his right-wing populism as “fascist,” it is not impossible that he could pull a Father Coughlin. That there are open white supremacists campaigning for him shows that the raw materials are there, waiting to be pieced together. That his campaign is able to employ an “aesthetic strategy”—though they would likely never acknowledge it—reveals an ability to do so.

What can be done then? Benjamin, in his essay, posits an intriguing alternative to an obvious “anybody but Trump” voting strategy: Against the aestheticization of politics, the left “responds by politicizing art.” It sound likes classic academic hairsplitting, but what each represents is one of the elements that has set apart our side as more thoroughly democratic and bottom-up.

The Freedom Kids’ song employs a beat that is simple and one-dimensional, easy to follow, lulling the listener into a sense of security and predictability. It uses buzzwords and phrases that occupy a specific place in the heads of Trump’s target audience and are guaranteed to get a rise: “cowardice,” “apologize for freedom,” “c’mon boys,” “enemies of freedom,” and yes, “make America great.”

Never is there any mention of what these mean or the potential human toll underneath them. That’s deliberate. They are intended to whip resignation and fear into a highly emotional and irrational powder-keg that can be ignited or dampened as those as the front of it see fit. Trump is in control, and he wants us to both know this and take comfort in it.

By contrast, the left has a rich and vibrant history of using art, music, literature and performance to gain critical distance, to question why life is the way it is, to make it weird, unfamiliar, anarchic and atonal so that we might see just how little our present condition makes sense. This is art intended to challenge and polarize. It is a disruption; a fundamentally democratic disruption that pulls back the wizard’s curtainand reveals the cold, Machiavellian machinations of political and economic elites for what they are. It is a tradition that runs through the revolutionary romanticism of William Blake, socialist surrealists like André Breton, Benjamin Péret, Franklin and Penelope Rosemont, and the best examples of psychedelia, graffiti art and punk rock.

It is an alternative that flips Trump’s logic upside down, be it through individual pranks or concerted mobilization. It can be found in the counter-protests that are starting to follow him wherever he goes. Or in workers’ unionization efforts and threats of strikes at his casinos (a fitting rebuke to a man whose solution to the Greek debt crisis is to build a hotel on top of the Parthenon). Or the work of Sarah Levy, the Portland, Oregon artist whose painting “Whatever” took the Donald’s words about Megyn Kelly’s menstrual cycle and turned them (literally!) inside out.

The Freedom Kids’ handlers would love nothing more than for us to smile gleefully when the doomsday button is finally pushed. Our side, conversely, must regain the confidence to smash and reshape reality, and push back against the Right's weaponized fatalism.

Alexander Billet is a writer, poet and cultural critic living in Chicago. He is a founding editor at Red Wedge magazine and has written for The Nation, Jacobin, New Politics and other outlets. Follow him on Twitter: @UbuPamplemousse.