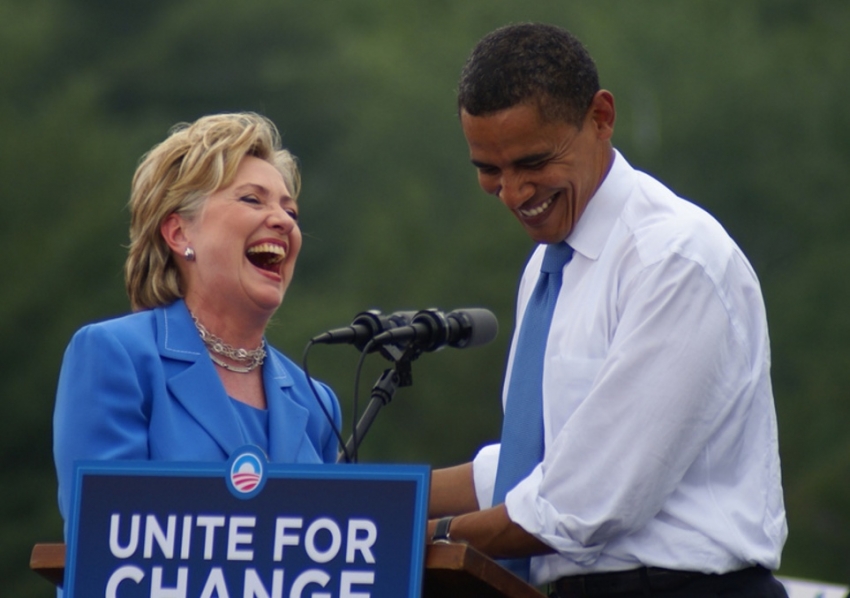 Just about every attack that has been lobbed against Sanders thus far in the Democratic race was once hurled against Obama.

Candidate Obama, now a hallowed progressive icon, faced a barrage of identical attacks back in 2008.

In the midst of a fierce primary contest, Hillary Clinton has laid into her opponent: “I could stand up here and say, 'Let's just get everybody together. Let's get unified. The sky will open. The light will come down. Celestial choirs will be singing, and everyone will know we should do the right thing and the world will be perfect.”

“You are not going to wave a magic wand and have the special interests disappear,” she added.

This wasn’t Clinton in 2016 attacking her opponent, Vermont Senator Bernie Sanders, for what she and her supporters view as his unrealistic and fantastical promises to the American people. This was Clinton in 2008, launching a stinging, sarcastic rebuke to her then-Democratic primary opponent, Illinois Senator Barack Obama, and his vague pledges of “hope” and “change.”

It’s easy to forget now, but just about every attack that has been lobbed against Sanders thus far in the Democratic race was once hurled against Obama. Since then, however, Obama has gone from being cast as a speechifying lightweight by Clinton to an accomplished standard-bearer for progressivism.

The charges of blind idealism have perhaps the clearest parallels. Liberal writers like Jonathan Chait have deemed Sanders’ platform as having “zero chance of enactment,” while Clinton, in words eerily similar to her 2008 speech about Obama, said recently of Sanders, “I wish that we could elect a Democratic president who could wave a magic wand and say, ‘We shall do this, and we shall do that.’ That ain’t the real world we’re living in!”

“I am not interested in ideas that sound good on paper but will never make it in real life,” she said as the Iowa Caucuses approached this year. The speech echoed her words in 2008, when she told a Texas crowd that “I am in the solutions business. My opponent is in the promises business.”

These critiques all rest on the idea of the Clinton as the clear-headed pragmatist “who gets things done” in comparison to idealistic and uncompromising dreamers like Sanders and Obama. (But in contrast with Obama in 2008, Sanders actually has an impressive record of accomplishments in Congress and is well-versed in the kind of grimy, incremental work involved in passing legislation.)

In 2008, the New York Times reported Clinton’s advisers charging that Obama’s tax cuts were “unrealistic” and “would end up forfeiting the Democrats’ hard-won reputation for fiscal discipline.” Clinton also called Obama “irresponsible and frankly naïve” for wanting to meet enemy leaders without preconditions.

Both of these criticisms may sound familiar to anyone keeping up with the present Democratic contest. Clinton has fretted that Sanders’ single-payer health care plan would somehow jeopardize the hard-fought Affordable Care Act, and she and one of her advisers criticized Sanders’ suggestion that the United States should normalize relations with Iran, saying, “It’s pretty clear that he just hasn’t thought it through.”

Obama and Sanders have both also faced accusations that they are more style than substance. “This other guy’s madder than she is, and that feels authentic,” Bill Clinton recently said about Sanders. “And besides, his slogans are easier to say.” Vox's Matthew Yglesias has similarly charged that “Sanders’ Wall Street plan is a slogan” and has challenged the senator to move past mere rhetoric and offer concrete, detailed policy proposals.

Candidate Obama, now a hallowed progressive icon brought up by Clinton during the primary fight, faced a barrage of identical attacks back in 2008. Obama had “hypnotized” the media with a “shallow campaign slogan” and his policies lacked specifics, pundits said. “There's a big difference between us— speeches versus solutions, talk versus action,” Clinton said in 2008. “Speeches don't put food on the table. Speeches don't fill up your tank or fill your prescription or do anything about that stack of bills that keeps you up at night.”

Sanders has also been called unelectable by Clinton and her supporters for his embrace of the label “socialist,” warning that a Sanders nomination would be a huge gift to the GOP. It’s a line of attack that candidate Obama also had to withstand eight years ago.

Fears about Obama’s “electability” (which some at the time viewed as a coded reference to race) were the cornerstone of Clinton’s campaign. “I’ve seen a lot of elections come and go and whoever our Democratic nominee is will be subjected to the full force and effect of the Republican attack machine,” Clinton cautioned in 2007.

Perhaps the most contentious attacks faced by both campaigns have been allegations of sexism and other criticisms of the candidates’ respective supporters. In the 2016 campaign, this has taken the form of the alleged “Bernie Bro” phenomenon, the army of fanatical, intolerant and/or misogynistic young, male Sanders supporters who harass anyone daring to express a pro-Clinton sentiment online.

The narrative has gained traction despite the fact that Sanders consistently outpolls Clinton among young women, with liberal pundit Paul Krugman repeatedly invoking the term to delegitimize criticism of Clinton. Most recently, in the midst of a string of anti-Sanders attacks, Bill Clinton complained that Clinton backers have been “subject to attacks that are literally too profane, often—not to mention sexist—to repeat.”

Voting for a candidate based on their supporters' actions is nonsensical. But these allegations are also virtually identical to those launched by the Clinton camp in 2008. Obama was regularly accused of running a sexist campaign, so much so that there was a notable contingent of Clinton supporters who threatened to vote for John McCain in the general election out of spite. Then there was 2008’s version of the “Bernie Bros”, a spate of stories from pro-Clinton pundits about Obama’s “creepy,” “cult-like” supporters. As in 2016, Krugman joined the fray, complaining that Obama’s campaign was “dangerously close to becoming a cult of personality” and declaring that “most of the venom I see is coming from supporters of Mr. Obama.”

The point of all this is not to say whether these allegations are right or wrong. Perhaps Obama and Sanders both do over-rely on rhetoric over concrete policies. Maybe they are too idealistic for their own good. But despite these perceived shortcomings, the liberal establishment largely embraced Obama after the 2008 election. Krugman himself went on to describe Obama as “one of the most consequential and, yes, successful presidents in American history.” It’s bizarre to see Clinton and her loyalists trumpet the same criticisms against Sanders as they did against Obama in 2008—while at the same time trying to position Clinton as the heir to Obama’s legacy.

If these supposed flaws weren’t enough to stop Obama from becoming a successful president (at least in the eyes of the Democratic Party), it’s hard to see why they would do so for a President Sanders. It’s time the Clinton camp updated their playbook.