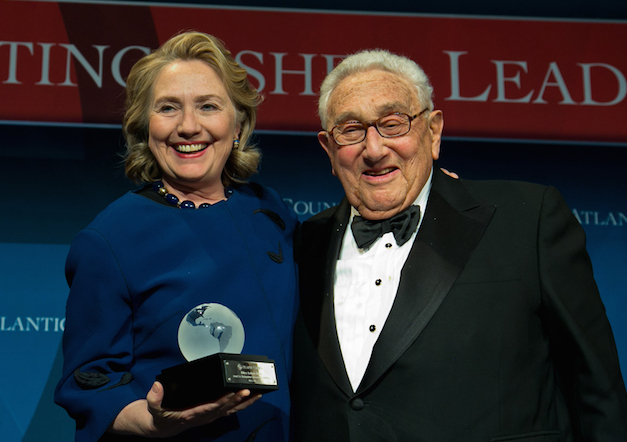 On the major networks’ newscasts, the exchange was only mentioned twice.

When it comes to coups and bombings, Clinton follows Kissinger’s lead.

Last week, presidential challenger Bernie Sanders attacked his rival Hillary Clinton live on US television for taking advice from Nixon-era Secretary of State Henry Kissinger, whom he accused of paving the way for genocide with his bombing of Cambodia.

According to a search of the Nexis news database, there were exactly two references to Kissinger following the debate on the major broadcast networks. CBS's Gayle King reported on the Early Show that “Sanders questioned why Clinton would praise former secretary of State Henry Kissinger,” and then played an excerpt from the exchange:

CLINTON: I know journalists have asked who you do listen to on foreign policy and we have yet to know who that is.

SANDERS: Well, it ain’t Henry Kissinger, that’s for sure.

On NBC‘s Today show, Andrea Mitchell played an even shorter excerpt (beginning with “journalists have asked you…”) as an illustration of how the candidates “hammered each other … on foreign policy.”

That was it. The three network evening newscasts, with a typical combined nightly viewership of 24 million, didn’t mention Kissinger. Nor did any of the Sunday morning talkshows. Even PBS NewsHour, whose Gwen Ifill and Judy Woodruff moderated the debate, never discussed the Kissinger exchange.

Twenty-four-hour cable news did a little better, with CNN Newsroom replaying the entire exchange, including Sanders’ explanation of why he objected to Clinton citing Kissinger as a mentor:

Kissinger’s actions in Cambodia, when the United States bombed that country, overthrew Prince Sihanouk, created the instability for Pol Pot and the Khmer Rouge to come in, who then butchered some 3 million innocent people, one of the worst genocides in the history of the world.

This was aired in the context of former California Democratic Party chair Bill Press saying that “the weirdest part, I think, of the whole debate…was Hillary wrapping herself in the arms of Henry Kissinger as a role model,” since “90 percent of Democrats are going to say who is Henry Kissinger and the other 10 percent are going to say they hate him.” After which longtime Clinton family adviser Paul Begala lectured: “A president actually has to get advice from all kinds of people.”

On CNN‘s Legal View , author/activist Johnathan Tasini– who ran unsuccessfully for New York’s Democratic senatorial nomination against Hillary Clinton in 2006, and incidentally wrote a study for labor coverage for FAIR in 1990– seems to have been the only commentator on national TV who took a moral stand against taking advice from Kissinger:

Tasini was interrupted by Democratic funder Robert Zimmerman—“And what’s your point, Jonathan? What’s your point?”—who went on to give what seemed to be the Clinton campaign’s line of the day: “Hillary Clinton, to her credit, takes input from a number of different people.”

Mostly, though, CNN seemed amused that Sanders would bring up Clinton’s connection to perhaps the Republican Party’s most famous foreign policy theorist: “Bernie Sanders may have won the 1976 part of the debate bringing up Henry Kissinger,” host John Berman quipped on CNN‘s Early Show. “Not resonating with millennials,” co-host Christine Romans chided.

Mockery was the order of the day on the right-wing Fox News Channel: “Of all the attacks Bernie Sanders could have launched against Hillary Clinton, this one truly came out of left field,” correspondent James Rosen began a segment on Fox‘s Special Report. Rosen told viewers that “Sanders advanced familiar left-wing criticisms of Kissinger’s role in the bombing of Cambodia, blaming him for the genocide that took place there years later.” (Actually, the mass killing in Cambodia began less than two years after Congress put a stop to the Nixon/Kissinger bombing campaign in 1973.)

Rosen said that “the explosion in Kissinger searches on Google suggested many of today’s voters didn’t even recognize the name.” Some might say it indicated a strong interest in learning more about Kissinger, an interest that media outlets could satisfy by providing information on his record and philosophy. Instead, Rosen offered Fox News host Jeanine Pirro definitively telling viewers that they are not, in fact, interested in Kissinger: “Does anyone care about Henry Kissinger now? I mean, do the people today care about that? No.”

Fox‘s The Five offered contempt for the idea that Kissinger was relevant to the election in more succinct form:

GREG GUTFELD: By the way, Sanders talked about Henry Kissinger more than he talked about ISIS, Iran and Iraq combined.

MSNBC, which positions itself to CNN‘s left for marketing purposes, displayed much less interest in Clinton’s Kissinger connection than either CNN or Fox did. Virtually the only discussion of Sanders’ critique came on All In when host Chris Hayes played a clip of the exchange—minus Sanders linking Kissinger to the rise of Pol Pot–then asked Sen. Barbara Boxer, a Clinton supporter, to respond. She dismissed it, saying, “I think that’s just a made-up, kind of silly point”:

I mean, that was just a throw-away point, that he thought she was running the department efficiently, didn’t mean she endorses his philosophy. Let’s look at the facts here. And I think the facts lead to Madame President on this one.

That was all MSNBC had to say about it, except for Chris Matthews on Hardball mentioning Kissinger and remarking, “I love the way Bernie hit on that last night.” Whether he meant he was impressed or amused by Sanders’ attack is unclear, because he never talked about it again.

Over Christmas the Kissingers were among the close group who gathered in Punta Cana, including Barbara Walters, Bill and Hillary Clinton, and Charlie Rose. “We have two house rules,” says Oscar, laughing. “There can be no conversation of any substance and nothing nice about anyone.”

Nor is the relationship purely social. As Clinton wrote in a glowing Washington Post review of Kissinger’s book World Order:

Kissinger is a friend, and I relied on his counsel when I served as secretary of State. He checked in with me regularly, sharing astute observations about foreign leaders and sending me written reports on his travels.

This collaboration, to hear Clinton tell it, was not based on a felt need to “get advice from all kinds of people,” as Begala would have it, but on shared ideology:

His analysis, despite some differences over specific policies, largely fits with the broad strategy behind the Obama administration’s effort over the past six years to build a global architecture of security and cooperation for the 21st century.

Greg Grandin in The Nation pointed out aspects of this shared ideology that might be offputting to those who take a progressive view of international policy: “When it comes to coups and bombing,” Grandin writes, “Clinton follows Kissinger’s lead”—endorsing the overthrow of Honduras’ elected government, for example, and advocating bombing Libya and Syria into compliance with U.S. visions.

There’s a lot that could be said about Clinton’s connection to Kissinger and how it has impacted her foreign policy choices—and how it might impact the policies of a future Clinton administration. The US’s TV news outlets, however, decided that viewers didn’t need to know.