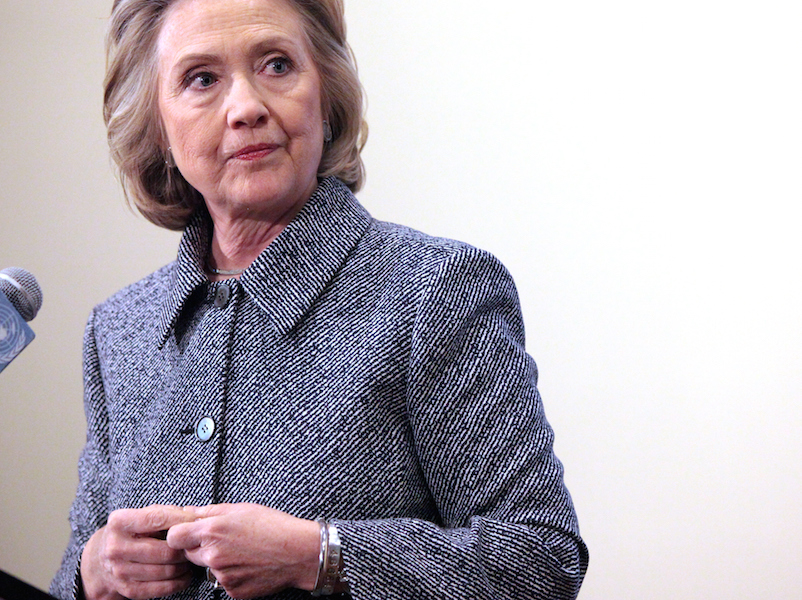 Hillary Clinton at a press conference on March 10, 2015, discussing the use of her email account during her tenure as secretary of state. (Photo by Yana Paskova/Getty Images)

‘Bravo!’ Email Appears To Show Clinton’s Friend Congratulating Her on Bombing of Libya

In an email with the subject “bravo!” sent on March 19, 2011—the day the United States and its allies began bombing Libya—Clinton confidant and former employee Anne-Marie Slaughter writes, “I cannot imagine how exhausted you must be after this week, but I have NEVER been prouder of having worked for you."

Hillary Clinton has spent much of her presidential campaign running away from her responsibility for the United States’ disastrous 2011 intervention in Libya. The February 19 release of more emails from her private server may make it harder for her to do so.

In an email with the subject “bravo!” sent on March 19, 2011—the day the United States and its allies began bombing Libya—Clinton confidant and former employee Anne-Marie Slaughter appears to praise then-Secretary of State Clinton for convincing a reluctant President Obama to take military action in Libya.

“I cannot imagine how exhausted you must be after this week, but I have NEVER been prouder of having worked for you,” writes Slaughter, who worked as an advisor to Clinton in the State Department from 2009 to February 3, 2011, and then remained a consultant to the policy planning bureau. “Turning POTUS around on this is a major win for everything we have worked for.” An earlier email release, which I reported on previously, showed that Slaughter had spent February 2011 imploring Clinton to involve the United States militarily in Libya, insisting that it would “change the image of the United States overnight.”

“Keep your fingers crossed and pray for a soft landing for everyone’s sake,” Clinton replies.

Other emails from earlier releases indicate that people close to Clinton gave her credit for the Libyan intervention. The day the UN Security Council approved a no-fly zone in Libya, Clinton’s unofficial adviser Sidney Blumenthal sent her an email saying: “No-fly! Brava! You did it!”

In another email, then-Bloomberg View Executive Editor James Rubin, who previously served as Bill Clinton’s assistant secretary of state, tells Clinton: “I think your efforts to keep the world's focus on removing Qaddafi and helping avoid a slaughter there last year will be long remembered.”

State Department staff even got an email from the former president of the American Refugee Committee Hugh Parmer asking them to pass on his “congratulations to Secretary Clinton for what was apparently her key role in persuading the Administration to act to protect the people of Libya.”

Clinton’s role in the Libya intervention has come under the spotlight due to the increasingly scrappy battle for the Democratic nomination, with Vermont Senator Bernie Sanders using Libyan dictator Muammar el-Qaddafi’s ouster to question her judgment on foreign policy. For her part, Clinton has sought to play down her involvement in the decision to go into Libya, even though at the time she clamored to gain credit for the operation.

Her role also bears scrutiny as the situation in present-day Libya continues to deteriorate. Far from a successful model of military force, the removal of Qaddafi led to the transformation of Libya into a lawless haven for terrorists, contributing to the ongoing refugee crisis and threatening to lead to renewed Western intervention in the country. The United States has launched two airstrikes against ISIS forces in Libya over the last three months, sent in ground forces as recently as January and has been pressing for a coalition of European countries to act. Today it was revealed by Le Monde that French special forces have been operating against ISIS in Libya for several months.

As the West gets further and further entangled in the Libyan conflict, the media ought to keep pressing Clinton on whether her foreign policy credentials are truly a selling point, given her apparent eagerness for war.