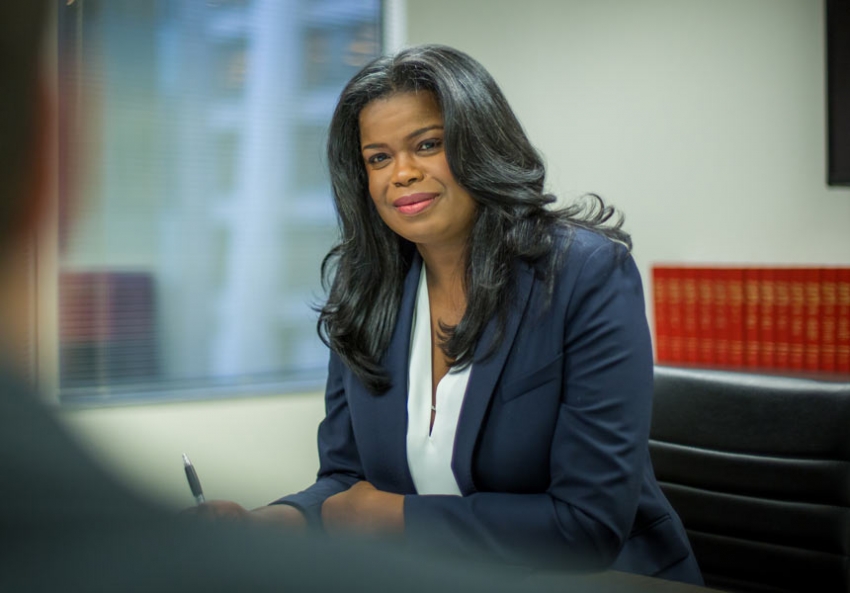 In a sign of the growing power of the Black Lives Matter movement, activists have effectively turned the prosecutor’s race into a referendum on policing and criminal justice in Chicago.

On February 24, youth organizers disrupted a fundraiser at the City Club of Chicago for Cook County State’s Attorney Anita Alvarez, linking arms and blocking entry into the formidable building with a banner reading, “#ByeAnita.”

Alvarez is seeking a third term as Chicago’s top prosecutor. She won her last re-election campaign handily, but this November could be different. In the past four months, she has faced a chorus of calls to resign over the fatal police shooting of Laquan McDonald, which detractors believe she tried to hide from the public. In a sign of the growing power of the Black Lives Matter movement, activists have effectively turned the prosecutor’s race into a referendum on policing and criminal justice in Chicago.

They also helped propel the candidacy of a progressive challenger in the March 15 Democratic primary. Kim Foxx’s campaign slogan strikes an unusual tone for the office: “It’s time to restore fairness and credibility to our criminal justice system.” In addition to her 12 years as an assistant state’s attorney (five under Alvarez), Foxx has pointed to her own life experiences as qualifications for the job—she grew up in a Chicago public housing project and has been the victim of crime, as well as seen family members incarcerated.

After leaving the state’s attorney’s office in 2013, Foxx became the chief of staff for Cook County Board President Toni Preckwinkle, a political foe of Alvarez. Preckwinkle’s advocacy helped launch Foxx’s campaign in summer 2015, which has since gained momentum in the fallout from the Laquan McDonald scandal.

According to a February poll, 71 percent of registered Democrats in Cook County disapprove of how Alvarez handled McDonald’s October 2014 killing. She waited 13 months to file murder charges against Jason Van Dyke, the police officer who shot the Black teenager 16 times. A graphic dashcam video of the killing was kept under wraps for more than a year; its release in November 2015 triggered street protests and demands that Alvarez and other top officials resign.

Alvarez said in February that she didn’t “believe any mistakes were made.” But both Foxx and Donna Moore—a former federal and state prosecutor who is also challenging Alvarez for the nomination—say they would have acted differently.

“The truth of the matter is she had determined he was a murderer and allowed him to go to work every day, to walk amongst us every day,” said Foxx in a February debate. Critics have asked whether the state’s attorney would have pressed charges at all had the city not been compelled by court order to release the video of McDonald’s killing. Alvarez defends her actions, saying she was waiting for a federal investigation to conclude before pressing charges.

In a sign of shifting political winds, Foxx has picked up key endorsements from Cook County’s Democratic Party and former Illinois Governor Pat Quinn, as well as both the Chicago Tribune and Chicago Sun-Times. Her campaign focuses on diverting low-level offenders into treatment programs, reforming the juvenile justice system and prosecuting wage theft and other workplace abuses—positions that have also won her an unprecedented endorsement from the Chicago Teachers Union, and the backing of other labor groups. Foxx also says she would appoint an outside prosecutor for all future police-involved shootings.

Alvarez continues to oppose this move, but has been quick to insist that she’s not afraid to go after law enforcement—her office has charged 96 police officers since 2008, according to a campaign commercial. Nevertheless, the McDonald case suggests “a relationship between the police and the state’s attorney where law enforcement is always right,” says Cook County commissioner and 2015 Chicago mayoral candidate Jesus “Chuy” Garcia, who endorsed Foxx in February.

In December 2015, Salon reported on a case in which Alvarez had refused to prosecute a police officer who admitted to committing perjury, vetoing decisions made by her subordinates and quashing further investigations. And some critics believe Alvarez deliberately bungled the prosecution of police officer Dante Servin, who walked free after he shot and killed 22-year-old Rekia Boyd while off duty in 2012.

Then there’s Chicago’s ignominious distinction as the nation’s wrongful conviction capital. Alvarez created a conviction integrity unit in 2012 that has reviewed more than 350 cases, vacating 13. But she has drawn fire for filing hefty charges against political protesters, as well as refusing to reopen murder cases of men who claimed they were framed by Reynaldo Guevara, a former police detective accused of obtaining confessions by torture for decades.

This isn’t the first time that a police killing has defined the course of a Chicago election. In 1969, armed officers raided the home of Black Panther Party leader Fred Hampton under the orders of Cook County State’s Attorney Edward Hanrahan. Seven minutes and roughly one hundred bullets later, 21-year-old Hampton lay dead. Black Democrats renounced their previous support for Hanrahan, who had dominated the polls in the year before the raid but went on to lose his 1972 re-election bid.

Still, it’s rare to see a candidate for prosecutor declaring openly that the criminal justice system is “broken” and running on a reform platform, says Fredrick Harris, the director of the Center on African-American Politics and Society at Columbia University. Prosecutors typically adopt a “tough on crime” stance. Harris believes this shift “is only possible because of the rise of the Black Lives Matter movement.”

Indeed, police accountability is at the heart of several other races around the country in 2016. In St. Paul, Minnesota local Black Lives Matter leader Rashad Turner is running for state representative with a platform centered on criminal justice reform. In Cuyahoga County, Ohio, Tim McGinty—the prosecutor who urged against indicting the Cleveland police officer who shot and killed 12-year-old Tamir Rice—faces a tough race for re-election after the local Democratic Party declined to endorse him.

But Chicago’s race sends the clearest message yet that local officials who fail to hold police accountable may pay a price at the ballot box. Activists seized on the state’s attorney race as an opportunity for outreach and political education: Members of the Black Youth Project 100 are reaching out to young Black people in the streets nearly every day leading up to the election, “reminding them what’s at stake,” says Breanna Champion, the group’s 23-year-old organizing co-chair. She’s blunt on that point: “We believe that Anita Alvarez needs to get out.” But Champion stresses that BYP100 do not officially endorse any of her opponents because “no one party or candidate will save us.”

Danette Frederique is a Spring 2016 editorial intern at In These Times. She is a student at the Medill School of Journalism at Northwestern University.