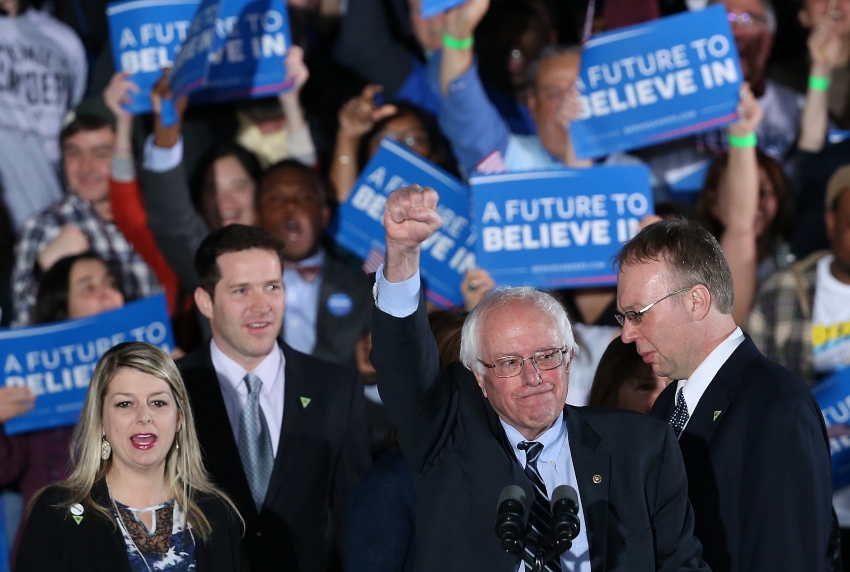 In Michigan, Bernie Sanders pulled off one of the great upsets in modern American politics. (Photo by Win McNamee/Getty Images)

Nate Silver of FiveThirtyEight noted that, before Bernie’s victory, “the candidate with the largest lead to lose a state in our database of well-polled primaries and caucuses was Walter Mondale, who led New Hampshire by 17.1 percentage points but lost to Gary Hart in 1984.” Now, that candidate is Hillary Clinton.

Bernie Sanders achieved a stunning and unprecedented victory in Michigan Tuesday night, winning the Democratic primary 50.1 percent to 48 percent and potentially changing the course of the presidential campaign.

Sanders was expected to lose Michigan by massive margins. While he has pulled similar come-from-behind feats in recent weeks, from nearly tying in Iowa to sweeping Minnesota and Oklahoma—all of which were predicted just a few days beforehand to fall into Hillary Clinton’s hands—Michigan represents the largest turnaround yet. RealClearPolitics’ average anticipated a Clinton win by 21.4 percent.

Nate Silver of FiveThirtyEight noted that, before Sanders’ victory, “the candidate with the largest lead to lose a state in our database of well-polled primaries and caucuses was Walter Mondale, who led New Hampshire by 17.1 percentage points but lost to Gary Hart in 1984.” Now, that candidate is Hillary Clinton.

Of course, Tuesday night’s results represent more than just one of the “greatest polling errors in primary history.” They herald a new opportunity for the Sanders campaign, which in recent weeks has seemed to be floundering, failing where it was expected to lose but also failing in states like Massachusetts and Nevada where it needed to win.

Pundits across the spectrum have noted that Sanders needs something to jolt his campaign back into gear—the Washington Post asserted on Monday that one of the reasons he lost Sunday night’s debate in Flint, Michigan (whose county he won) was that he “failed to change the underlying dynamic of the race.”

That is no longer the case. Bernie has shifted expectations and pulled the greatest turnaround of this race. Michigan shows that his campaign can continue its practice of defying conventional political wisdom in favor of a new and radical mass politics.

The win also comes on the tails of increased Sanders fundraising from his supporters, with the democratic socialist from Vermont outraising his establishment opponent for the second month in a row in February. He raised almost $40 million last month, including $6.4 million in the 24 hours after polls closed in New Hampshire on February 9. Sanders often makes a point of the fact that the average donation to his campaign is $27, an indicator that he is is funded primarily by small donors.

However, fundraising alone won’t win him the nomination. Jeb Bush’s failed presidential bid in spite of massive fundraising has shown as much. Instead, Sanders has to convert the energy from his latest victory into momentum going forward. It is essential that he continue to defy expectations in states voting in what he calls “the most important seven-day stretch of our campaign.” These include Illinois, Ohio, Florida, Missouri and North Carolina, all states where Sanders lags behind in the polls, and where a win would represent yet another rebuke to the Democratic establishment.

The worry among Sanders supporters, of course, is that this will all be too little too late. Most media outlets portray Clinton with a commanding lead in the delegate count integral to determining the nominee at the Democratic Convention in June. She is presented as having more than twice as many delegates—1,221 to his 571, according to many counts.

Yet this number is misleading because it factors in superdelegates—party leaders whose vote is decided not by who wins in their state but by their own preference. As these figures are mostly representatives of the establishment, it is no surprise that Clinton has racked up 461 endorsements, and Sanders has only managed to garner 25.

However, it is extremely unlikely that the superdelegates would go against the candidate chosen by the popular vote—to do so would be fundamentally anti-democratic and would trigger a major crisis in the party. When the delegate count is examined without superdelegates, it becomes clear that Clinton is only leading by about 200 delegates—still a sizable number, but by no means insurmountable.

If Sanders can continue to defy expectations in key states similar to Michigan, and pick up enough smaller states on the way, he could well scrap his way to the Democratic nomination—and change the nature of the Democratic Party while he’s at it.