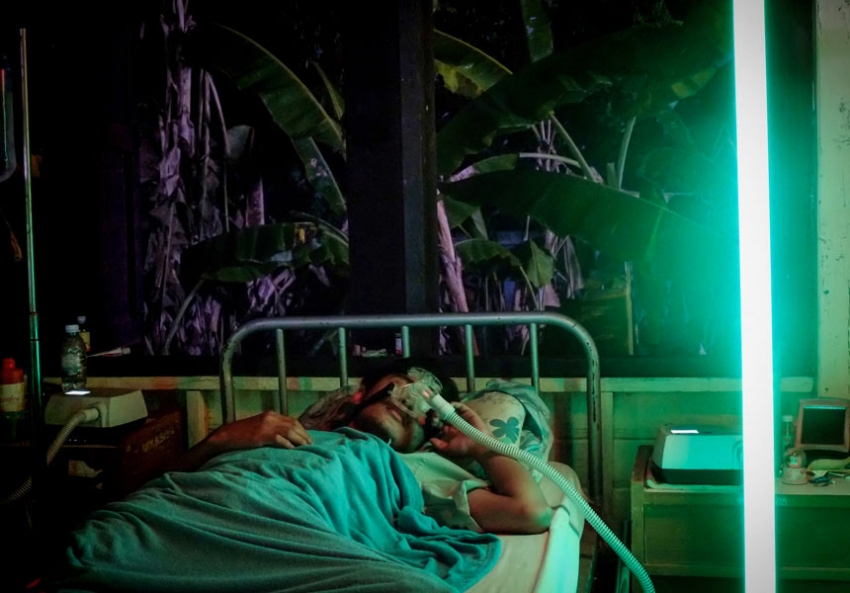 Weerasethakul explores dreams and reality through young Thai soldiers in an endless slumber. (Chai Siris/Courtesy of Kick the Machine Films)

Two Upcoming Fims Not Coming to a Theater Near You

‘Francofonia’ and ‘Cemetery of Splendour’ are worth tracking down

The one-man meta-New Wave from Thailand, Weerasethakul may be the most original working filmmaker alive, which is to say that his gentle, ironic, magical-realist idylls are radically different from both mainstream multiplex fare and Euro-Asian “art films.”

World cinema grows and seethes outside of our American dome; if a movie doesn’t adhere to a particular narrative and formal structure, Americans will not pay it much mind.

(It’s like many other things in this way.) At the world’s film festivals, however, anything is possible, and that’s where new films by Alexsandr Sokurov and Apichatpong Weerasethakul are newsmaking events. Sure, their films get small arthouse releases here, and may even show up on Netflix (as has Weerasethakul’s mesmerizing 2010 masterwork Uncle Boonmee Who Can Recall His Past Lives, presumably to the baffled chagrin of the average Netflix and chill viewer). Nevertheless, their films are strange-smelling hothouse flowers lost in a landscape of industrialized corn fields and feedlots.

Russian-born Sokurov is one of the globe’s most protean voices: In a 40-year career so far, his films range from 10 minutes to over five hours, from unearthly phantasias to psycho Flaubert adaptations to gritty documentary.

Francofonia is a ruminative essay about the Louvre, which to Sokurov isn’t merely the center of Paris but the center of the world. Sokurov is a historian for whom art and museums are essential to our awareness of our past and our cultural selves. The moment for him here is the 1940 German occupation of Paris, and the face-off between Nazi commander Franz von Wolff-Metternich, commissioned to safeguard the art, and Louvre director Jacques Jaujard. Wolff-Metternich, a sympathetic aristocrat and art expert who presents an elegant foil to the working-class bureaucrat Jaujard, both seen in archival photos and embodied by actors.

Sokurov doesn’t dramatize the story. He folds into his collage first-person revery (a friend Skypes him from a storm-beset freighter carrying art), a visit from Napoleon (“C’est moi!” he exclaims before various portraits), drone shots over Parisian rooftops, the ghosts of Messerschmitts flying past windows, and archival footage, from Chekhov’s death bed to Hitler eyeballing the Eiffel Tower to the building of the Louvre Pyramid. And then there are the paintings, into which Sokurov falls, changing the light on them and seeming to give them three-dimensional life.

“Who would we be without museums?” he asks, making Francofonia a semi-documentary, not only a companion piece to his Hermitage Museum epic Russian Ark, but also recent paeans to museum-ness like Jem Cohen’s Museum Hours (2012) and Frederick Wiseman’s National Gallery (2014).

The one-man meta-New Wave from Thailand, Weerasethakul may be the most original working filmmaker alive, which is to say that his gentle, ironic, magical-realist idylls are radically different from both mainstream multiplex fare and Euro-Asian “art films.”

His latest, Cemetery of Splendour, is a poetic tissue of tropical moments, haunted by the irrepressible past. The setting is a country hospital set up inside an old school—and, we learn, atop an ancient burial ground for Thai kings. Occupying the beds are dozens of young soldiers beset by sleeping sickness, which does not prevent them from waking and then passing out again, mustering erections, or having their dreams plumbed by a young psychic. Volunteering at the hospital is an aging woman on crutches (the filmmaker’s go-to favorite, Jenjira Pongpas Widner), who bonds with one sleeping soldier and accompanies him when he wakes into the world outside.

Are dead souls keeping the soldiers dozing? Could be. The sleepers are equipped in their beds with therapeutic columns of changing light; later in the film, entire scenes start to change color, too, suggesting that we’re in a dream that has infected reality—a dream of psychic memories of demolished palaces to a playground made of dinosaurs to tsunami rings on a banyan tree.

At one point, a giant paramecium crawls across a clear blue sky. Goddesses appear at picnic tables. On the soundtrack, chirring jungle insects and windy rumbles roll on unabated. “What happens next”—the be-all and end-all for American movies—is not a concern. Instead, the tenderness of the present moment, however bizarre and bewitching it may be, is the meat of the matter, in fine Buddhist tradition. “Life is like candlelight,” someone says deep in, and it feels just about right.