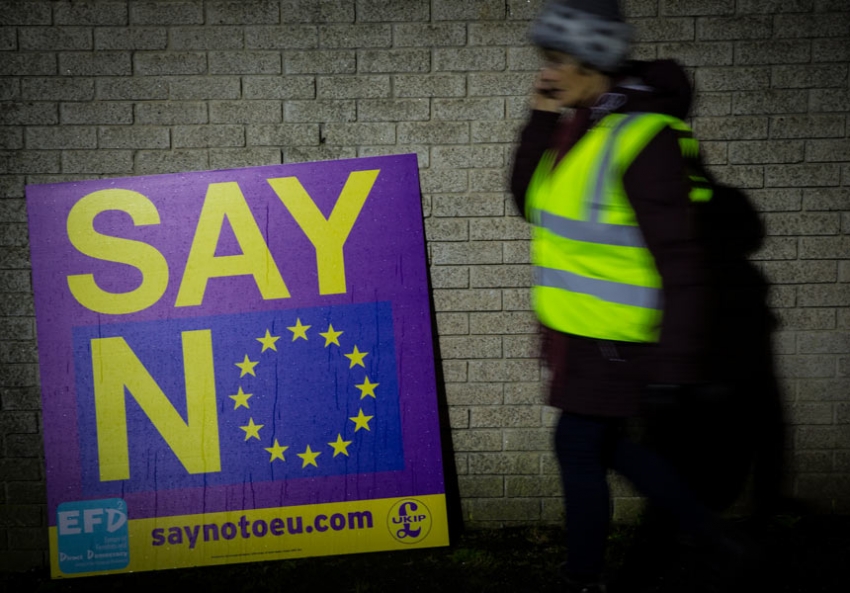 An anti-EU banner sits outside a ‘Say No, Believe in Britain’ event February 22 in Cornwall. (Matt Cardy/Getty Images)

Prime Minister David Cameron Is Right; the U.K. Should Stay in the EU

But its half-hearted participation must go.

There are serious problems with the European Union...Our lukewarm membership has left us unable or unwilling to address these issues.

It is an irony with which we’re familiar. The first U.K. referendum on whether we should stay in or leave the European Economic Community, the precursor to the EU, was in 1975, and it, too, arose out of a split, within Harold Wilson’s Labour government. Those wanting to stay won, with more than two-thirds of the vote. Now, those Tories who want to leave the Union—or “Brexit” supporters, as they’re known—invoke their somewhat mythical “special relation” to the United States as part of their determination to get out, just as the Left of the Labour Party in 1975 saw Europe as a distraction from our historical relations with the Commonwealth, which were also shot through with a certain amount of fantasy and denial.

The U.K. has never been an enthusiastic or committed member of the European Union. General de Gaulle famously turned us down twice in the 1960s, fearing that we’d seek to dominate things and serve as a conduit for U.S. influence. Tory Prime Minister, Edward Heath took us in in 1973, and we’ve never ceased to realise de Gaulle’s suspicions. We’ve been a perpetual irritant, always negative, always insisting on our “special status,” refusing to join the Euro or be part of the Schengen Agreement that abolished border controls—we have the easiest border, after all, in the sea that surrounds us.

In the current debate, members of the government are being allowed by the prime minister to campaign on either side, and several have declared their willingness to vote against the government’s recommendation that we stay. Though Cameron’s offered slogans include “safer, stronger and better off” (“in” rather than “out,” that is) and the warning that leaving would be a “leap in the dark,” some of us fear that it is harder to stir up excitement about remaining and the status quo than about change.

There are serious problems with the European Union. It is undemocratic and bureaucratic in ways that invite corruption. It has grown fast and perhaps awkwardly, so that its member countries differ hugely in their politics, their economies, their histories and their cultures. Our lukewarm membership has left us unable or unwilling to address these issues. In our semi-detached relation, we have only argued for changes that are thought advantageous to the United Kingdom. In fact, there has been almost no mention of how the minor concessions involving migrant workers and financial regulations that Cameron has exacted from the EU might affect other countries in the European Union. And in his insistence that as nonEuro members we should be excused from bailing out countries like Greece, or from taking in refugees according to an EU system of quotas, we have been seen as embarrassingly self-seeking. Other EU countries are exasperated by our demands.

Cameron is right about one thing: We need to stay in the EU. People old enough to have lived through the Second World War feel relief that most European countries are able to collaborate. We need the EU as a check on our right-wing government’s undermining of the welfare state, particularly the National Health Service, education and legal aid. We need its scrutiny of workers’ rights and pay and jobs. We need its financial market for investment and trade. Perhaps we need it most because the chances are that if we vote to leave Europe, European-looking Scots will vote to separate from the insular English (despite hints that some Scottish National Party members will vote “Brexit” simply in order to hasten Scottish independence). We are in for a bumpy few months.