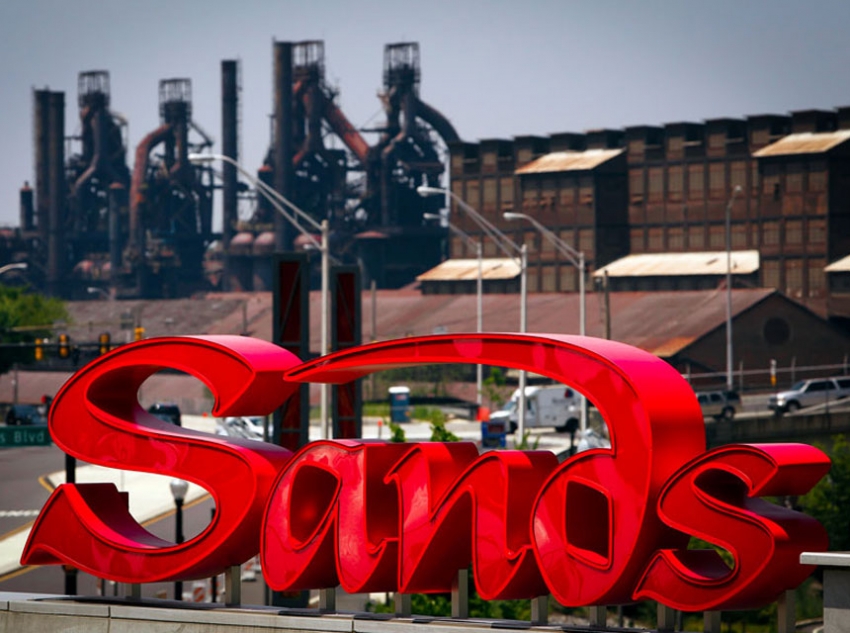 A new book analyzes the demise of Bethlehem Steel and the rise of a casino in post-industrial Pennsylvania.

The Steel’s gigantic 20-ton ore bridge, once used to move heavy iron ore on its way to the blast furnaces, now serves as an archway—emblazoned with the red Sands logo.

In 2009, six years after Bethlehem Steel pulled the final curtain and closed its Pennsylvania-based corporate headquarters, global casino impresario and multibillionaire GOP fundraiser Sheldon Adelson mounted a ceremonial stage to celebrate “the Steel’s” reincarnation as a Las Vegas Sands casino resort. Against an 1,800-acre backdrop of hulking detritus left behind by what was once the world’s second-largest steel company, he announced, “In Hebrew, Bethlehem means ‘the house of bread.’ And what do you need to make bread? Dough. That’s what we intend to make here.”

This play for laughs steamed some of the locals who took pride in having once made things of substance, from the steel beams that raised the Empire State Building to the armor plate, ordnance and ships that won World War II. It didn’t help, either, that Bethlehem steelworkers had not only been losing their jobs since 1995, but, with the company’s bankruptcy in 2001, they lost their pensions and health coverage, too. Making dough isn’t on quite the same moral plane as either producing steel or retirement security.

Or is it? In From Steel to Slots: Casino Capitalism in the Postindustrial City, historian Chloe E. Taft makes the case that the postindustrial city cannot be jammed into simple historical narratives of progress and decline. Rather, as a “place,” a city is a site of ongoing “social construction” rife with multiple meanings and stories that connect “local experiences and legacies to global contexts and transactions.” For Taft, it seems to matter little whether badly needed private investment comes in the form of casino gambling or, say, wind turbine manufacturing. Never mind that manufacturing yields useful products, where casino gambling—like its kindred scam, the neoliberal finance regime— conjures ill-begotten fortunes for the mega-rich. Taft is out to “challenge dichotomies that would distinguish production and service work” and “wellworn categories of ‘before’ and ‘after.’”

From its earliest colonial days, Taft tells us, Bethlehem has been a place of global market investment. It was settled as a Moravian Church missionary outpost in 1741 on the north side of the Lehigh River. The growing German village quickly became headquarters of the church’s North American operations above the Mason-Dixon Line. Its 20thcentury “Christmas City” festivities attracted tourists to the quaint, orderly streets and sturdy architecture, which bred an early and active historic preservationist culture. Meanwhile, on the south side of the river, a cluster of small iron foundries on farmland sold by the Moravians to meet foreign debts gave rise to Bethlehem Steel, incorporated in 1904, which drew thousands of mainly Eastern and Southern European immigrants to work there and live nearby.

But with the passage of restrictive immigration laws in 1924, the spigot of exploitable newcomers was shut off. So Puerto Ricans, recently naturalized as U.S. citizens, were actively recruited for Bethlehem’s lowliest jobs, which might otherwise have gone to African Americans moving to industrial cities during the Great Migration. Puerto Ricans lived on the South Side too, albeit in segregated neighborhoods that would expand to include other Hispanics after the great white postwar suburban exodus.

This is the cultural geography Adelson inherited in his role as default urban developer: the North Side with its legacy preservationists and church and corporate elites, and the South Side with its dormant industrial infrastructure and community activists at war with deepening poverty. He was undoubtedly drawn in part to the fact that, unlike most of its small industrial city peers, Bethlehem was not a shrinking city, having lost only 7 percent of its population at the trough of its decline compared with, say, Flint, which has lost more than half. Taft lays greater store by another geographical consideration: Bethlehem is half as far as Atlantic City from New York, home to large pockets of Chinese immigrants whose numerological traditions lend themselves to gambling.

Taft’s ethnographic study shows how these various communities within and beyond Bethlehem have imprinted their own meanings on the former steel works. While some steel workers, feeling betrayed, wanted to see all remnants of the company replaced, other community interests pushed successfully to integrate the city’s industrial past into the casino complex’s reuse plans. Adelson preserved parts of the Steel’s architectural legacy, embracing industrial aesthetics in the resort’s décor: amber ingot-shaped lighting, exposed brick and beams reminiscent of the old mill. The Steel’s gigantic 20-ton ore bridge, once used to move heavy iron ore on its way to the blast furnaces, now serves as an archway—emblazoned with the red Sands logo.

As a case study of the steel industry’s decline and casino-based postindustrial economic development, From Steel to Slots offers up illuminating detail and storytelling—if also a convoluted interpretation indebted to what has been called the “spatial turn” in the humanities. Especially engaging is Taft’s analysis of dealer service work, which combine elements of risk-based entrepreneurial mobility with those of factory work. In the words of one interviewee, “The tables are your production line, the chips are your assets that you use to facilitate your production, and your dealers are your line workers.”

Interesting, too, is the Bethlehem Sands’ shift over time toward catering to busloads of day-tripping Chinese tourists from New York City (where Chinese immigration jumped by 160,650 between 2000 and 2010), as the resort departs from its industrial aesthetics to suit Chinese tastes and the locals bear what Taft describes as “racialized” ambivalence. We also learn a great deal about the growing global casino industry, which mirrors neoliberal “casino capitalism.”

Taft acknowledges that working people in former factory towns like Bethlehem are worse off economically than they were before the flight of manufacturing, but she contends that “active placemaking” of the sort being carried out on and near the Steel site preserves a foundation of “meaning,” however indeterminate. Such activity aligns with a virtue shared by gamblers seeking to overcome past personal failures and high-stakes risk-takers in business and finance: Both are “fundamentally forward looking,” Taft insists—trying too hard, it seems, to thread the needle.

Taft’s “discursive landscape” is forced to do too much intellectual and political work, and is itself one of those 20-mile-high now-hoary abstractions that 40 years of neoliberal finance capitalism has bred in our academic class. One can care deeply about place, agency, history, the feckless optimism of progress narratives and the dangers of romanticizing heavy industry, while also conceiving a more capacious future worth really fighting for—and not betting it all on short-term “place”-holders.