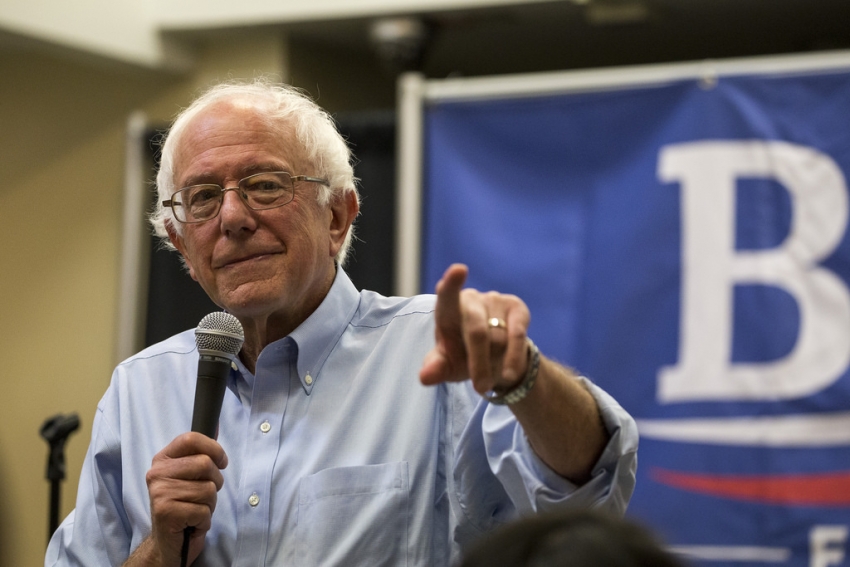 Bernie Sanders has spurred a movement and, no matter the results of the election, it doesn't have to end. (Phil Roeder / Flickr)

If Bernie’s campaign is going to become the catalyst for long-term transformation that many hope it will, some changes are in order.

Let’s commit to staying in the fight together, making global change through local organizing. Whether we get you elected or not, the struggle will only have just begun.

We are amongst the millions of donors and hundreds of thousands of activists who have pushed your campaign forward against seemingly unbeatable odds. What can we say? We love you. Some of us have felt this way for years, as we watched your long march from maverick Mayor of Burlington, Vt., to solo socialist in the U.S. Senate. Some of us were only more recently smitten by your bolt-from-the-blue presidential campaign, which has injected life and hope, and a small bird, into the lifeless and hopeless American political landscape. This is a happy moment for our relationship. We are slowly turning the tide against the liberal machine in the primaries, riding high on a surge of popular support.

This is a hard conversation for many of us to have. We’ve been hurt before. Many of us have developed a deep and healthy mistrust in electoral politics, moving to workplace and community organizing to build popular power. There is a reason for this. Many of us poured our hearts into the presidential bids of the Rainbow Coalition, or the long-shot campaigns of Ralph Nader and other Green Party candidates. Many of us turned out to put Obama in the White House on the backs of what was until then the largest grassroots mobilization in a presidential election in history.

Whether they won or lost, all of these electoral campaigns left little behind but broken hearts, and in the most recent and notable case, broken promises. On a deeper level, we feel that the changes we seek cannot simply be voted into existence — we want to bring participatory democracy to life in all spheres of society. For many of us, participation in electoral politics feels like an abusive relationship.

We want this time to be different. Let’s build something real together. Let’s make not just a political revolution, but a social and economic revolution by building not just a campaign for president, but a lasting movement.

We thought of four ways that our relationship could go to the next level:

1. Build our own lists. The conflict with the DNC and NGP-VAN shows us that we can’t trust the Democratic Party machine with our organizing infrastructure. We need our own membership lists that they don’t control.

2. Let us become members and organizers. Change will not happen with one election or one politician. We need a social movement. Social movements are made up not of one politician speaking out on stage against the establishment, but of millions of individuals standing up and working together. Create a pathway to membership in your campaign, which would bring with it more responsibility and a long-term commitment.

If your five million donors became members, we would be larger than any labor union in the United States and on par with the NRA, which has more effectively held a gun to the head of the government than any political organization in US history. If we provide training to help members become organizers, there is no reason why we couldn’t double or triple the size of your base, large enough to make the political revolution permanent and pervasive—and extend it into workplaces and communities as an economic and social revolution.

3. Practice democracy. What sets your campaign apart is the promise of democracy. Let’s make that promise real inside the campaign. Allow us to become not just donors, voters, or consumers of Bernie, but producers of this political revolution. Formalize a democratic process for campaign members to decide on campaign planks and plan actions.

This will allow you to outflank Hillary’s latest gambit to market herself as the “intersectional” candidate by giving an open invitation to labor, racial justice, feminist, environmental, LGBTQ, anti-war, and other social movements to become not just talking points or staff positions, but full coalition partners in the campaign. It will also reassure those of us who have been hurt by politicians in the past that this will remain a relationship of equals, and you won’t forget about us when we get you elected. And it will help turn the political revolution into a revolution of everyday life—where democracy becomes something we practice every day in our neighborhoods, workplaces, unions, and community organizations, not just every few years at the ballot box.

4. Take the fight local. You’re a fighter. That’s what we love about you. Let’s commit to staying in the fight together, making global change through local organizing. Whether we get you elected or not, the struggle will only have just begun. If you are in office, you will need a massive grassroots apparatus to unseat Republicans and pressure or remove moderate Democrats to see through the political revolution, and extend it into an economic and social revolution. If the centrist machine steals the election, then we can work together to pressure the government for our demands directly or elect democratic socialist representatives at lower levels of government.

And no matter who wins the election, we need to organize for change in our workplaces and communities—making a political, economic and social revolution through organizing at the local level. So let’s keep the campaign offices open (as many as we can afford to, at least) after the election, and turn them into hubs for organizing. If we build an organization capable of campaigning beyond the election cycle, and in workplaces and communities as well as in the political sphere, we can’t lose.

What do you say, Bernie? Can we make this work?

The last year has been magical. Let’s keep the magic alive, let’s give our campaign a future we can believe in.

You can see the full list of signatories, which has now reached over 1,000, and sign on to the letter yourself, here.