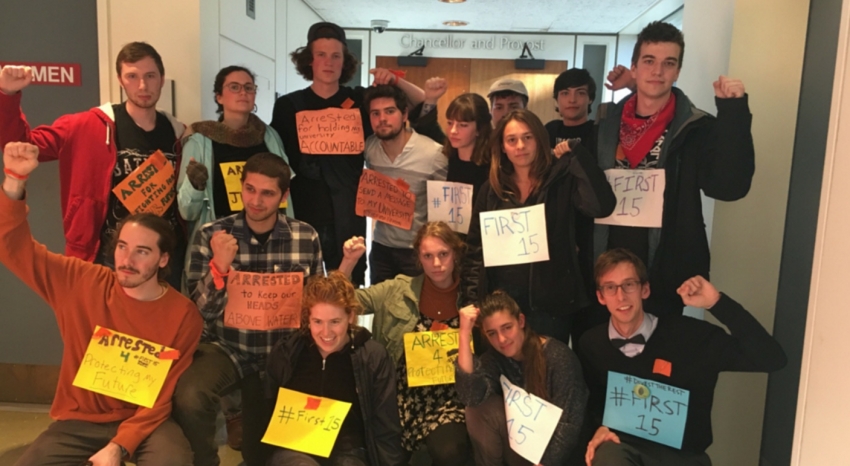 The new round of demands for divestment have taken place at nine universities, and more are coming.

“Even the pizza guy was in solidarity with us, texting us support.”

Standing behind several feet of caution tape, a few hundred students at the University of Massachusetts-Amherst last night shot out a warning: “First 15, we’ve got more!”

The call was a reference to the 15 students being led out by police in clumps from the Whitmore Administration Building in front of them, wrapping up a 2-day, 120-person sit-in for fossil fuel divestment. Earlier, four members of Divest Harvard were arrested on similar terms at the Boston Federal Reserve building, home to the Harvard Management Company that oversees the college’s investment. Hours later, Yale’s Chief Investment Officer David Swenson announced the university would begin taking steps to divest the school’s endowment from fossil fuels, starting with $10 million of holdings in coal and tar sands.

“We aren’t here to negotiate anymore. We’re here for them to pledge full divestment,” UMass sophomore Mica Reel told me over the phone. Divest UMass expects to hear a decision from their administration by the end of the day today. And, as the chant last night promised, the campaign has more students ready to go to jail in the event of a “no,” along with rings of support beyond the campus.

“Even the pizza guy was in solidarity with us, texting us support,” she says.

Yesterday’s arrests were part of a wave of nine divestment actions taking place over the next few weeks, coordinated by organizers with the Fossil Fuel Divestment Student Network (DSN) and 350.org. It’s the second such spate of protests for divestment, the first having happened last spring at the University of Colorado-Boulder, the University of Mary Washington, Bowdoin College and other campuses around the country. (Nineteen students, incidentally, were arrested at Yale a year and a day before Swenson’s announcement.)

Spawned nearly six years ago, the fossil fuel divestment movement has enjoyed its share of successes—61 campuses have adopted the demand, and $3.4 trillion have been committed to going fossil free worldwide. That total includes other sectors, as well, like religious institutions, pensions funds and philanthropies.

Some have expanded the divestment call even farther. Tate Britain, one of the UK’s most esteemed galleries, had its sponsorship from BP dropped recently after years of pressure from Liberate Tate, part of the now-international push for “Fossil Free Culture” that thrust David Koch from the board of the Museum of Natural History. As the science on global warming grows bleaker, the movement to stop it grows.

Dubbed “Youth > Fossil Fuels,” this year’s escalation is happening in an election year where fossil fuel money has become a central point of debate—the Clinton camp’s $4.5 million of industry-linked funds, in particular. It’s a fact not lost on the movement’s organizers, who are drawing out a conflict of interests between their university trustees’ fossil fuel ties and their investment decisions.

Victoria Fernandez, 23, is an organizer with the DSN who got her start working on her campus campaign at UC Berkeley, where she graduated from last year. “With all the momentum Bernie Sanders has created,” she told In These Times, “students are feeling really excited and empowered.” Fernandez also pointed out that students trained in the divestment movement were “those that finally got Hillary to take a stance against the Keystone XL pipeline,” have driven Democratic candidates to support a federal investigation of ExxonMobil, and bird-dogged both parties’ White House hopefuls over their cozy relationships with coal, oil and natural gas companies.

In a similar vein, UMass students highlight the $320 million invested in Exxon by Putnam Investments, a firm where two of the school’s leading investment officers have held top positions. They also note that the university’s biggest donor, Jack Welch, is a former General Electric CEO and vocal climate denier, who has called global warming both a “socialist plot” and a form of “mass neurosis.” Just as corporate campaign funds limit candidates’ ability to do right by the climate, students argue, trustees’ and administrators’ fossil fuel links create an uneven playing field for progress on campus.

“The students that are leading this movement and actions today have been leading in the election as well,” Fernandez adds.

At a campaign stop in Purchase, New York earlier this month, Greenpeace organizer Eva Resnick-Day prompted Hillary Clinton to break her cool, asking if she would reject donations from the fossil fuel industry.

“I do not have—I have money from people who work for fossil fuel companies,” Clinton scolded. “I am so sick of the Sanders campaign lying about me.” Resnick-Day is not affiliated with Bernie’s campaign, but with the fossil fuel divestment movement. She took a pledge circulated by the DSN to organize on climate justice “for the long haul” last year, stating, “I don’t want corporations and oil hungry governments to get to decide whether our climate survives or crumbles.”

For Fernandez, the crossover from divestment campaigns like UMass’s to the campaign trail seems almost natural.

“Students are creating tension and points of conflict where they see inconsistencies in the way that things are going and the way that they want them to be,” she says. “Those organizing skills—moving and building public support to pressure folks to answer to public opinion—those are the media and strategy skills of many political staffers.”

Alongside the frontline activists stopping fossil fuels at their source, divestment students are christening a more confrontational and political breed of environmentalism. Rather than blaming wasteful consumer habits or waxing poetic about the end of days, organizers are setting their sites on a clear target: the fossil fuel industry and the 1 percenters backing it up.

With more sit-ins planned before the end of the semester, students may also be more likely to see announcements like Yale’s yesterday—all upping the ante, directly or indirectly, for schools and politicians alike to leave fossil fuels behind.