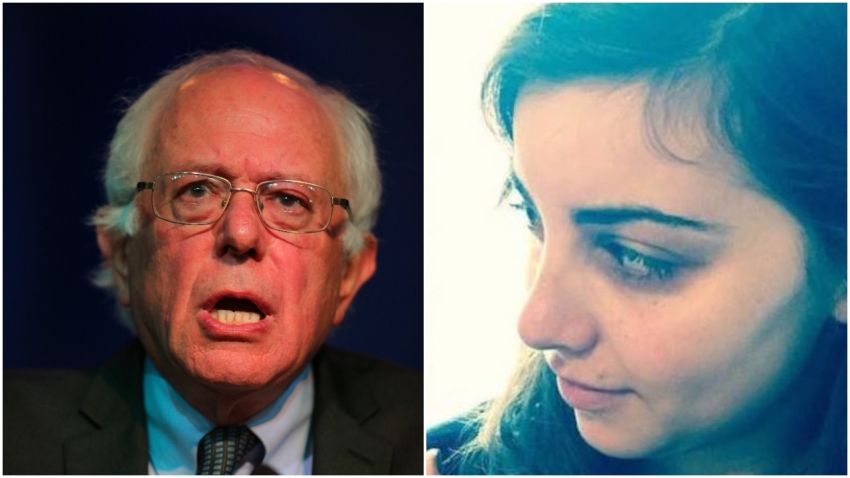 As the first Jew to win a presidential primary, Bernie Sanders is positioned to take a real stand for the rights of Palestinians. Ending the suspension of Simone Zimmerman is a necessary step. (Bernie Sanders photo by Adam Bettcher/Getty Images)

Simone Zimmerman was suspended from her position for her comments against Israeli Prime Minister Benjamin Netanyahu. But her position reflects the diversity of thought among millennial Jews—and should be celebrated, not punished.

Bernie Sanders’ new Jewish outreach coordinator, hired just three days ago, is almost out of a job. The Sanders campaign announced late Thursday that Simone Zimmerman was to be suspended pending an investigation of critical Facebook posts she made about Israel’s Prime Minister, Benjamin Netanyahu.

Sanders has submitted to the media firestorm that followed the discovery of the posts, but he can still turn back from a course that will ultimately result in surrender to the pro-Israel lobby. He must not only reinstate Zimmerman, but also state that he fully supports diversity of thought among Jews—especially millennials—concerning Israel/Palestine and the occupation.

Zimmerman first came under fire just a day after she was hired, when the Washington Free Beacon posted a Facebook post from March 2015, in which she wrote that “Bibi Netanyahu is an arrogant, deceptive, cynical, manipulative a**hole.” She continued, referencing the Operation Protective Edge, 2014 Israeli invasion of Gaza, “F**k you, Bibi … you sanctioned the murder of over 2,000 people this summer.” According to the United Nations Office for the Coordination of Humanitarian Affairs, 1,483 Palestinian civilians were killed in the war.

Since the Free Beacon’s report on Wednesday, dozens of members of the American Jewish establishment and media have lined up to condemn Sanders and Zimmerman and to demand that Zimmerman be fired. This despite the fact that Zimmerman edited the profanity from her Facebook post well before being hired by the Sanders campaign, in what essentially amounts to a rescindment of the offensive language she used. Nonetheless, the former head of the Anti-Defamation League, Abe Foxman, said that “No amount of word changes can cure [Zimmerman’s] ugly characterization of the Prime Minister of Israel and the Israeli army and people defending themselves.”

Ronald S. Lauder, president of the World Jewish Congress, called Sanders’ choice to hire Zimmerman a cause of “profound concern,” and also pressed for her firing. Others slammed Zimmerman for “trying [to] destroy Israel,” and slandered her as a “self-hating” Jew.

Sanders himself is no stranger to Israel-related controversy. In an interview with the New York Daily News on April 4, he overestimated the number of civilians killed in the 2014 Gaza war, saying “I don't remember the figures, but my recollection is over 10,000 innocent people were killed in Gaza.” When provided with the correct number, he accepted it immediately, but the media and Jewish establishment nonetheless lambasted him for his mistake, with Israel’s former US ambassador accusing him of “blood libel.”

This has led to a larger debate about the disproportionate use of force in Operation Protective Edge. Sanders’ opponent Hillary Clinton has repeatedly argued that Israel was entirely within its right to defend itself from Hamas’ rocket attacks with whatever force necessary. And in a major speech to AIPAC last month, she said of Israel that the United States must “take our alliance to the next level.” Sanders, on the other hand, responded to assertions that he was “taking a more critical position” on Israel by insisting instead that he is taking “a more balanced position.”

“Of course we are going to support Israel, but you cannot ignore the needs of the Palestinian people in Gaza right now: poverty, unemployment, their community has been decimated,” he continued on CNN. “You can’t ignore that fact. And you can’t just be only concerned about Israel’s needs. You have to be concerned about the needs of all of the people of the region.”

Sanders’ willingness to recognize two sides to the conflict in Israel/Palestine has struck a chord with not just Arab American voters (who he wins 2 to 1), but also among millennial Jews.

“This is a candidate who has embraced the full humanity of Palestinians in a way we have not seen from any past president except for Jimmy Carter,” Charles Lenchner, a Jewish Sanders supporter from Brooklyn, told JTA.

Indeed, in Thursday night's Democratic debate, Sanders again proclaimed the need for the United States to treat the Palestinian people with diginity and respect and refused to back down from his claim that Israel's actions in Gaza were “disproportionate.” As the Huffington Post notes, that's the kind of rhetoric that falls right in line with Zimmerman's views.

The fierce backlash against the Sanders campaign for both his Gaza comments and the Zimmerman hire shows just how much the establishment is out of touch with millennial Jews. While Sanders trails among New York Jews in general, 65 to 32, more and more millennial Jews are joining anti-occupation and even anti-Zionist movements.

By hiring Zimmerman in the first place, Sanders showed a willingness to engage with the future of American Jewry. By hiring a proudly non-Zionist Jew who supports the right of pro-BDS groups to organize on campuses, Sanders embraced the vast diversity of Jewish political thought instead of adhering to a single pro-Israel orthodoxy.

And yet, by capitulating to the media furor over Zimmerman’s Facebook comments, Sanders risks throwing that all away.

It's likely that no one who knew Sanders’ platform on Israel was going to change their mind about him—one way or another—after learning about Zimmerman’s anti-Netanyahu views. He wasn’t really risking voters by hiring her, but by threatening to abandon Zimmerman and the Palestinian justice movement—and the thousands of young Jews that are a part of it—Sanders is jeopardizing the integrity of his campaign. In response to the suspension of Zimmerman, supporters of the outspoken activist took to Twitter on Thursday using the hashtag #IStandWithSimone to demand her reinstatement.

Sanders shouldn’t give in to the American pro-Israel Jewish establishment that he has spent much of his life arguing against. He should continue to assert his opposition to the occupation and the use of disproportionate force. He must keep asking the establishment, as Zimmerman challenged in a February Haaretz column, “Do you support equal rights for all people and if so, what are you going to do about it?”

If Sanders gives up on Zimmerman, he will show that even the Jewish outreach coordinator for a Jewish candidate for president—the first Jew to ever win a presidential primary—cannot stand up against the myopic worldview of the pro-Israel establishment.

But by keeping her on Sanders can prove that for Jews and Palestinians alike his campaign truly represents a future to believe in.